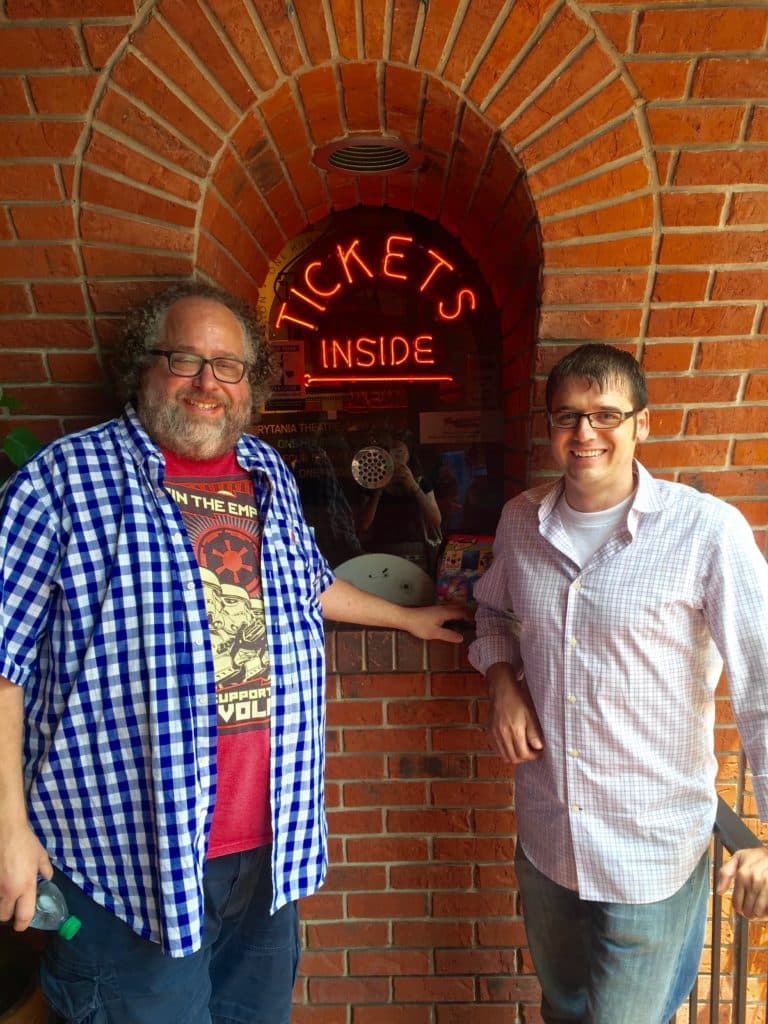 Nestled on scenic tree-lined Prytania Street, you will find the oldest movie theatre in New Orleans. For over a century, it has inspired many unforgettable movie experiences. Make it a date and enjoy the latest movie in a wonderfully vintage setting.

Locally owned businesses infuse New Orleans neighborhoods with their unique character, and are a big part of why we want to live, work, eat and shop here. The Shopkeeper Stories series shares the vision and personality of New Orleans business owners.

What ignited the spark in you to start your business?
Robert: My grandfather, Rene Brunet, Sr., started his first movie theatre on Baronne Street over 100 years ago in 1905. He later opened up another one on Claiborne Ave. called the Harlequin, which was an open-air theatre, in 1910. The Vitascope was the first permanent theatre in the U.S. in 1896, so he opened it up within a couple of years of the first one. While I have no clue why he did, it has been in my family bloodstream since then. After that, he opened up the Imperial Theatre in Mid-City, and as soon as my dad came of age, he started working with his dad. Once my grandfather passed away, my dad took over the Imperial. We acquired the Joy Theatre in 1978. I was 15 years old and started working with my dad. At that time, my dad was operating the Joy, The Carver, The Famous, The Circle, The Gallo and the Clabon. Then we took over the Prytania in 1996. So, Theatres have continually been in our family since 1905.

Today, we’re still a neighborhood business and family owned. There are four generations of Brunets that have survived off the income of this business. There are days when you have to eat hotdogs for dinner, but at the same time there are times when you eat steak. We understand the Stay Local mission, and we help out other local businesses whenever we can. We have been there. I may not become a millionaire with the theatre, but I do what I love and I’m happy with just surviving – that is the cherry on top!

What makes New Orleans businesses so special?
Robert: New Orleans businesses in general are more friendly than most cities. I hate the term “southern hospitality,” but I guess there is some truth to it! New Orleans marches to the beat of its own drum – it’s a slower city, but we aren’t super slow. There is so much character and charm here. With the U.S. being as young as it is, New Orleans feels like an “old soul”, and that trickles into the businesses. It does not feel like a new place, it seems like there is 400 to 500 years of life to the city. That is our history.

Eric: I’m originally from Montana and have been in New Orleans for 12 years. I know the small town feel, and New Orleans is definitely feels like a small town. There is a lot of support for local businesses here and until recently the shopping malls and big box retailers have not really played a major role except in the suburbs.

Who are your customers?
Both: Our customers are typically people that live in the neighborhood. Many have moved away but grew up around here, and they still supports us. The fact that the theatre is 100 years old means there is so much history here—a lot of first dates, a lot of childhood memories.

As a matter of fact, our owner Mr. Gish is from New York, but his wife is from New Orleans; one of their first dates was here at the Prytania, so when the theatre went up for sale from its previous owner, that was the reason why they bought; not for profit, not necessarily a great business venture, just the fact that it was their first date. So that’s a little indicative of what this business is about. At the same time, with the theatre having been here for over 100 years, we do have a very diverse clientele, depending upon what movie(s) we are currently showing.

If your shop was a drink/cocktail, what would it be?
Robert: What’s a fancy drink that’s basic? I mean that’s kind of what we are. We want to be fancy with a lot of charm and character. How about an Old Fashioned… with a cherry!

What’s your favorite local business on Prytania?
Both: The Creole Creamery, especially with how hot it is! But also for a multitude of different reasons – it’s a small local business, they make everything in house, and it’s in the storefront of the old Mackenzie’s bakery.

What advice would you give a budding business owner?
Robert: Have a good business plan! Make a budget; don’t shoot from the hip! Know your customers and really listen to them. Even though I’m behind the scenes, I know how important it is to be in the lobby talking to the customers and know what they want from you and what draws them back. Pay attention to what customers want, and giving it to them will ensure they come back.

With the rise of Netflix, we’ve had to really focus on making a trip to Prytania Theatre a lasting experience—something you can’t get from sitting on the couch watching Netflix. The perfect example is when an actor or actress passes away, we do a memorial or a tribute for them, like we did for Prince and Muhammad Ali. We give people a reason to come. You know, coming with a group of people is very social – something your couch doesn’t offer. It’s a unique experience. The bottom line is you have to give people a reason to not want to stay at home.

What is your favorite detail about the Prytania Theatre?
Robert: I like that you can walk in off the street and you’re literally transformed in time. Although this theatre has been through a few renovations and fires, it still looks similar to a theatre that was built in the early 1900s: we have traditional red drapes and even though we are modernized with the digital projectors and our state-of-the-art sound system, that’s all behind the scenes, so you do not see those improvements. When you walk in, there’s not much else you will see that you wouldn’t see when you came to watch a movie in 1916 or 1920.

While drainage system improvements and road construction make “shopping local” a bit morechallenging in the short term, the critical improvements mean our city will be safer and stronger for generations to come. We hope you are inspired and continue to shop small and shop local—even if it takes a little extra time!

The Shopkeeper Stories are brought to you by StayLocal, the Greater New Orleans independent business alliance, in partnership with Uptown Messenger. Learn about their work or become a member at www.staylocal.org or email info@staylocal.org.

[This article was updated at 11:35 a.m. by UptownMessenger.com]

One thought on “Prytania Theatre: A Century of First Dates and Fond Memories”