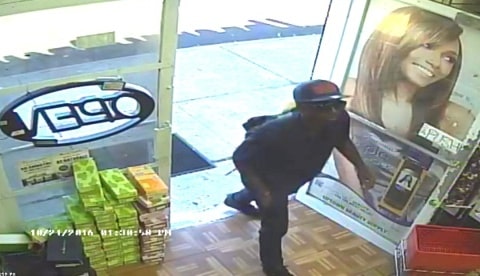 The suspect in the robbery of Uptown Beauty on Friday, Oct. 21. (via NOPD)

A beauty supply store, a gas station and a sandwich shop along the Carrollton corridor were each the locations of robbery incidents over the weekend, but police have identified a wanted serial robber as a suspect in one and released a surveillance photo from another.

The first robbery took place around 1:30 p.m. Friday, Oct. 21, at Uptown Beauty at 8200 South Claiborne Avenue, police reports show. A man with a gun walked into the store from a rear entrance, put a gun to the cashier’s abdomen, and took $600 from the register, the reports state.

The gunman — whose image was caught on security camera — was described as a thin, 5-foot-7 black man in his early 20s with a dark skin tone and a thin mustache, the report states. 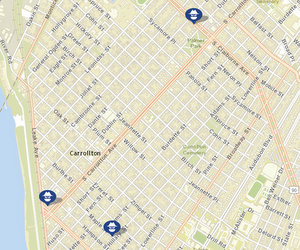 Around 8 p.m., the Shell Gas Station at 600 South Carrollton was robbed by a man wielding a box cutter, according to the report in that case. Investigators have identified the suspect as 47-year-old Kenneth Barnes, who was already wanted in four other armed robberies of businesses along the Carrollton corridor from March to September, police have said.

Around 2 p.m. Saturday afternoon, a man with a box cutter made another robbery attempt at the Jimmy John’s restaurant at 7600 Maple Street, police said. When he confronted the employees there, however, they all ran out of the store, and he left without getting any money, the report states.

Anyone with information in any of the three cases above is urged to call the NOPD Second District station at 658-6020 to speak to a detective, or CrimeStoppers at 822-1111 to leave an anonymous tip that could be eligible for a cash reward.

Finally, police made an arrest in the Oct. 11 robbery in the 1300 block of Coliseum Street in the Lower Garden District. After investigators identified 25-year-old Brandon Wilfred as the suspect, he turned himself in at the NOPD Sixth District station on Friday, where he was booked on a charge of armed robbery, the report states.