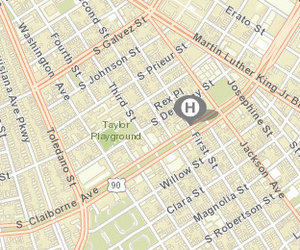 Six people were injured — including one with a life-threatening wound to the head — in a shooting Sunday evening on First Street in Central City, New Orleans police said.

The victims — a 30-year-old woman and five men, ages 63, 60, 35 and two who are 23 — were all near First and South Derbigny streets around 8 p.m. Sunday, Sept. 11, when gunfire broke out, police have said. One man suffered a life-threatening gunshot wound to the head, said NOPD spokesman Tyler Gamble, while the other victims’ injuries were not considered life-threatening, and responding officers were initially unsure how many people had even been shot because half of them went to area hospitals in private vehicles.

“Based on the initial investigation, we believe the suspect(s) intended to shoot at someone who was at that location and struck several bystanders in the process,” Gamble said in an email update about the case Monday morning. “We are investigating the possibility that this incident may be connected to other violence reported in the district over the past few weeks.”

Police have not released any video or other images of suspects in the incident. Anyone with cameras or any other information is urged to call the NOPD Sixth District station at 658-6060 to speak to a detective, or CrimeStoppers at 822-1111 to leave an anonymous tip that could be eligible for a cash reward.