On Monday, Mayor Landrieu honored his vainglorious pledge made earlier this year to when he signed a new gun ordinance. The final draft of this absurd farce of legislative dreck was mercifully stripped of all provisions that completely merely mirrored existing state law. This left only three remaining restrictions.

2) prohibiting “[p]ossession of a firearm, or dangerous weapon as defined in L.A. 14:2, on one’s person at any time while in a firearm free zone” including on any “NORDC campus;” and,

These provisions were specifically chosen by the mayor and the council precisely because they are themselves illegal. The City of New Orleans has no authority to regulate firearms – the state has preempted the field.

As I have noted in previous columns, Louisiana’s firearms preemption law bars local governments from enacting “any ordinance or regulation more restrictive than state law concerning in any way the sale, purchase, possession, ownership, transfer, transportation, license, or registration of firearms” with exemptions for the levying of taxes and fees, as well as laws that prohibit “the possession of a weapon or firearm in certain commercial establishments and public buildings.”

Put glibly, the language of the preemption law is intentionally broad. There’s really no way around it; the purpose was to render firearms laws uniform, and so its purpose would be subverted if preemption were riddled with loopholes.

Landrieu’s canned response to these criticisms has been to simply deny there’s any conflict, as though mulishly refusing to acknowledge the law will change what it says. His office also failed to respond to this columnist’s request for further clarification.

There has been no word from any public official explaining how the stolen gun law doesn’t violate state preemption. The text of the law itself states on its face that it imposes a legal obligation on the “owner” of a firearm in certain cases where they are no longer in possession of said firearm, punishable by criminal penalties. It’s ridiculous to assert that it does not concern “in any way” the “possession [or] ownership” of a firearm.

Heck, the city could just as easily pass a requirement that all gun owners paint their houses bright orange, or that they wear a scarlet “G” on their chests in public. The notion that such laws would not concern firearms “ownership” does not pass the smell test.

On the other hand, the stolen firearms law is generally regarded as unenforceable. Absent an outright confession, the police can’t prove when a person knew their firearm was lost or stolen, or whether the theft was reported. After all, the law only requires you to report the theft to an officer – it doesn’t require you to describe the gun or even give your name.

The law further includes a new regulation against the negligent carrying of a concealed firearm. An existing state provision is almost identical to this law, except that it is restricted to “concealed handguns.” The new municipal restriction simply swapped “firearm” for “handgun” (although due to sloppy legislative drafting, there are two cases where “handgun” wasn’t swapped out, leading to possible confusion).

Obviously any expansion of an existing state law as to possession of a firearm would violate preemption, although this portion of the law is likewise more smoke than fire. It’s highly difficult to conceal any firearm other than a handgun, and handguns are used in the vast majority of crimes.

The only imposition within the new firearms ordinance of any great significance comes from the expansion of firearm free zones to include any “NORDC campus,” which the law defines vaguely as including “all facilities and property at which NORDC-sponsored youth recreational activities are offered.” In its original press release on the subject, the city opined that this would even include open areas, such as NORDC parks and playgrounds.

NORDC operates city properties throughout the city. Just take a gander at this map from NORDC’s website, and the scope of this new rule becomes clear: 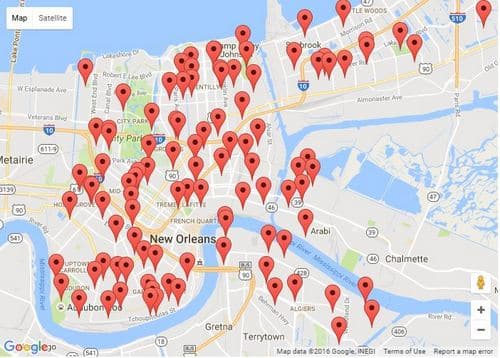 Tyronne Walker, Landrieu’s senior adviser for local affairs, defended this portion of the new gun ordinance this past week on WWL radio’s “Think Tank” program. “The state law does allow municipalities to regulate where we have, um, firearms, where we allow firearms in public facilities,” Walker explained. “A NORDC facility is a public facility.”

This meager defense was absolutely no defense at all. It is a verbal sleight of hand whereby the city is intentionally conflating a more generic term, “facility,” with the more specific term actually used by the preemption law, which is a “public building.” A “building,” as defined by Black’s Law Dictionary 222 (9th ed. 2009), is simply “[a] structure with walls and a roof.”

A federal court in Michigan dealt with a similar issue back in 1985 in O’Keefe v. Detroit, 616 F. Supp. 162 ( E.D. Mich. 1985). In that case, at issue was a law providing tort immunity to “public buildings.” The plaintiff tried to argue that the outdoor areas of a zoo fell under the ambit of the immunity statute. The Court disagreed; it declined to “judicially transform the definition of public building in the subject statute to embrace public areas such as the park-like outdoor setting of the zoo.” The Court further noted that “the legislature chose the word ‘building’ rather than public ‘place,’” and thus the Court could “not supplant plaintiffs proffered definition for that which the legislature has chosen.”

The new ban on firearms on NORDC properties is troubling and could easily lead to improper charges. Reflecting state law, there is an exemption for concealed-carry permit holders and also for any “constitutionally-protected activity,” which would include carrying firearms openly. However, many police officers may not be aware that open carry is not merely legal, but a constitutional right.

The bottom line is that Landrieu’s firearms ordinance is both ineffectual and illegal, leading one to wonder what exactly the point of it was aside from shameless political posturing. Given Landrieu’s pathetic background, I think we all know the answer to that.