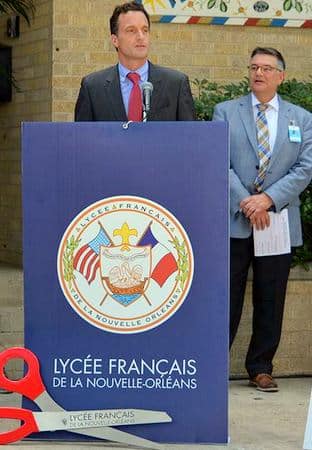 After starting classes at its new temporary location on South Carrollton Avenue this fall, Lycée Français de la Nouvelle-Orléans is already looking for ways to maximize its use of the space as the school continues to grow, officials said this week.

Lycee board president Michael Williams said that discussion is ongoing on the use of space on the temporary campus at Central St. Matthew UCC on 1333 South Carrollton. The school’s facilities committee isn’t ready to come to the board with anything just yet, Williams said, but has held preliminary conversations.

“There have been discussions that we may need space sooner than previously anticipated, based on the costs of future renovations on the other side of the building,” Williams said during a meeting of the school’s governing board Monday night.

Another option at the Central St. Matthew UCC church is to shift office space around to make a little more room for classrooms, said Chief Academic Officer Marina Schoen. Lycee is already near the building’s capacity, she said.

Because the agenda for Sept. 19 was not posted online and the agenda for the previously-postponed Sept. 12 meeting was accidentally uploaded in its place, the board voted to amend Monday’s night’s agenda, in order to add the items of approving a contract with the environmental consultant LEAFF and starting the search for remediation services at Priestly through a public bid contest.

“I think when it got posted to the internet, someone clicked on the wrong Word document,” Williams said.

Postponing the public bid contest would delay the start of the remediation process, Williams said.

“I’d hate to lose that 30 days,” board member Tim Gray said. “The LEAFF contract is essentially for monitoring services and packaging your bid together, which we also know is going to need to be done. So I don’t see a scenario where we wait a month.”

According to Williams, the cost of LEAFF’s services is $66,000, half of which goes to daily monitoring, making sure the Priestly facility isn’t spreading pollution to Lycee’s neighbors during its development. The next step for the Priestly campus is doing the remediation work for asbestos and other material in the building, which LEAFF is going to help with through guiding the school in going out to do a public bid for remediation services.

Because the preliminary discussions between Lycee’s architect and city planning officials about the Priestley renovations are moving forward, the school could potentially cut down the timeline of opening the new permanent campus location, officials said. At least two weeks can be shaved off the time-frame for the January 2019 opening, if Lycee’s Priestly campus isn’t required go through as many inspections or acquiring of permits.