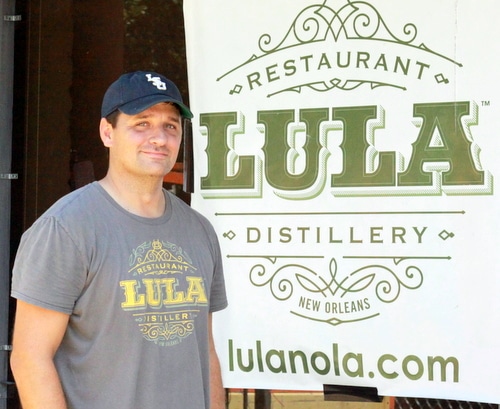 Lula Restaurant Distillery co-owner and head chef Jess Bourgeois pauses during construction this week on the former Halpern’s Furnishings Store on St. Charles Avenue. The distillery’s copper still is being delivered this week, and the restaurant is expected to open in early November. (Robert Morris, UptownMessenger.com)

This week, a massive copper CARL still from Germany arrived on a ship at the Port of New Orleans, and it will soon become the centerpiece of Lula Restaurant Distillery, the unique new restaurant under development in the former Halpern’s Furniture Store on St. Charles Avenue.

The restaurant, however, is the first step in the planned redevelopment of the entire block into a major expansion of the Prytania Park Hotel, part of a wave of boutique hotels opening around New Orleans outside the French Quarter and Central Business District.

Restaurateur Jess Bourgeois first introduced his idea for Lula to neighbors in the Lower Garden District in May of 2014, but then embarked on several years’ journey through not only the city bureaucracy, but also the state legislature. With the help of former state Rep. Bryan Adams of Gretna, Bourgeois and partner Bear Caffery drafted and saw passed a new law allowing “micro-distilleries” to produce fewer than 12,000 gallons of spirits a year and function in a similar way to brewpubs. The distillery make vodka, gin and rum from Louisiana sugar cane for sale and use in the restaurant, as well as some light distribution for retail — but no more, Bourgeois said, than he could personally deliver in his pickup.

Bourgeois and his partners officially broke ground on the Lula renovations in May 2016, and have spent most of their efforts thus far preparing the former furniture store for the drainage and plumbing required of a restaurant and distillery. Those efforts are nearing completion, Bourgeois said, and the delivery of the still this week will mark a turn toward more visible changes to the building.

The potential of the building is evident even in such a early state. Heavy pine trusses cross one another 13 feet above the floor, and the actual top of the ceiling is another 10 feet higher, giving the central dining room a majestic, industrial feel. The top of the copper still itself will reach into that ceiling space at the rear of the building, and will be sealed off from the dining room by a glass wall, so diners will be able to see it in action. Bourgeois personally removed the furniture store’s wood flooring and refinished it for use in the walls alongside exposed brick. The restaurant also features two separate conference rooms for events, and the furniture store’s large bay windows usher in ample light off St. Charles Avenue.

In contrast to the state of the building, the menu at Lula is nearly finished. Bourgeois trained at Le Cordon Bleu Culinary Academy in Austin, Texas, worked in the kitchen at Commander’s Palace before Hurricane Katrina and then spent nine years working for the Superior family of restaurants, most recently in Birmingham. He grew up, however, down the bayou in Donaldsonville, La., and the entire menu seems to reflect a marriage between what he grew up eating with the techniques he learned professionally — with nothing priced over $20.

His twist on the classic smoked tuna dip is smoked pompano with avocado, and instead of boudin balls, he’ll offer boudin egg rolls with a molasses fig sauce. Another appetizer prepares the emblematic New Orleans gourd, the mirliton, like fried pickles. Lula has a boiled seafood menu, featuring shrimp, crawfish or blue crabs seasonally, but each with a variety of sauces and bread or French fries for dipping — “whatever we can do to have people pass it around so everybody can taste it,” Bourgeois said. Instead of fried chicken, the menu offers fried cornish hen (which can be prepared in about a quarter of the time as chicken), and he pairs rabbit with white beans. As often as possible, he uses the same Louisiana sugar cane in his sauces that the distillery will use in its spirits.

“I’ve tried to take things I’ve learned along the way and apply them to things I’ve liked my whole life,” Bourgeois said. “These are all things I love to eat.”

While Bourgeois prepares the restaurant for opening the first week of November, the Halpern family is continuing to prepare the rest of the block for future development as well. First, they intend to convert the vacant lot on the Melpomene Street side of the block into temporary parking to help accommodate traffic to Lula, said Dori Schulman, daughter of Alvin Halpern, the furniture store founder who envisioned the transformation of the block before he passed away in January.

“It’s really going to make that corner nicer for the foreseeable future while other plans are put in place,” said Tracie Ashe, the Studio WTA architect managing the project.

The permit for temporary parking only lasts two years, by which time Schulman said her family hopes to have begun construction on their long-range plan for the block — two major expansions of the 60-room Prytania Park Hotel. The first phase will be a new 48-room expansion in place of the same temporary parking lot on the Melpomene side of the block, and the second phase will be a new 90-room building in the current parking lot on the Terpsichore side. The new buildings would have their own structured parking, which Lula would share.

The Halperns’ plans represent one of a new wave of hotel projects planned outside the French Quarter and Central Business District where tourist lodging has traditionally congregated in New Orleans.

Mavis Early, executive director of the Greater New Orleans Hotel and Lodging Association, said that there is no one reason for the proliferation of new hotels outside the city’s tourist core. Clearly, as more of downtown is redeveloped, the potential locations for major hotels there are shrinking. But the continued growth and evolution of the tourist industry is likely a more direct explanation for the new development pattern as the city draws ever more international accolades as a place to visit — even the slower summer months are now seeing higher occupancy rates, she noted.

Early is currently tracking 2,000 new hotel rooms planned for the city, with 400 of them already under construction, and the new locations for the hotels reflect the ways that the city is growing. While Mardi Gras or access to hospitals would have always been a draw for tourists Uptown, other factors are making the need for lodging space Uptown more consistent — Tulane just announced that this year it is welcoming its largest incoming class, while the city is seeing a growth as a wedding destination. Likewise, a hotel in Mid-City would have always been welcome for Jazzfest visitors, but the new hospitals and growth at City Park provide more for tourists to do there. And the growth in tourist activity outside the center is no accident; it is actively encouraged by marketing campaigns such as “Follow Your NOLA.”

“That’s just a natural growth pattern to move out from the core,” Early said. “There are different kinds of travelers, because more people are traveling, and seeing different parts of the city allows people to see our culture, and what our city’s about.”

At the Prytania Park Hotel, Schulman said the steady flow of visitors asking about other parts of Uptown is part of the reason her family wants to expand. In the meantime, she said, Lula’s unique combination of a restaurant and distillery will give visitors and locals alike something to see in New Orleans that they can find almost nowhere else.

“The restaurant is just going to be an incredible plus to the St. Charles Avenue area, because there’s just nothing like it,” Schulman said.

Note: This article was reported in partnership with Gambit and a version of it appears in the newspaper’s print edition this week.