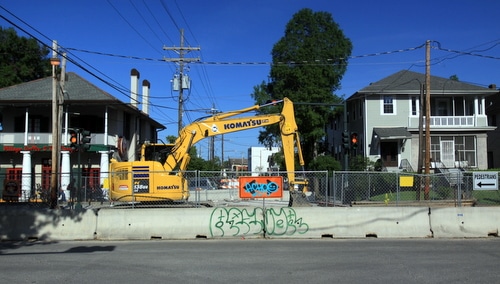 The intersection of Freret and Jefferson — photographed in May 2015, officials say. (Robert Morris, UptownMessenger.com)

Motorists on Freret Street will be unable to cross Jefferson Avenue for the next five months or so, and will be detoured again around the intersection through the side streets, the Sewerage and Water Board of New Orleans announced.

The intersection closure will primarily affect drivers on Freret Street, as the northbound lane of Jefferson will remain open, according to the S&WB announcement.

Drivers approaching the intersection from the university area will be detoured along Octavia Street and Nashville Avenue, while those coming from downtown or the Freret commercial corridor will take a right onto Jefferson Avenue.

Meanwhile, in a separate action nearby, parking will be restricted on Jefferson Avenue between Constance Street and Dryades while the permanent roadway is rebuilt, the S&WB said. That work will begin Wednesday and last until Monday, Sept. 12, the agency said.

“All vehicles should be removed from the north and south bound parking lanes on Jefferson Avenue between Constance Street and Dryades Street,” the agency said. “The northbound traffic flow for Jefferson Avenue will be maintained during this portion of the project.”

Both the lane closure and the parking restrictions are part of the ongoing construction of the major new underground drainage canals through the SELA Urban Flood Control Project.