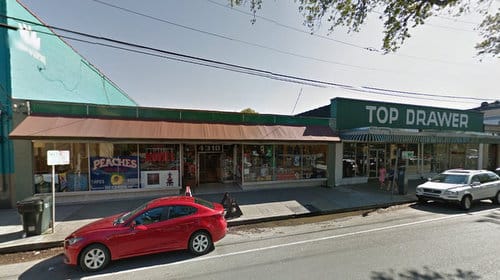 The building at 4310 Magazine Street will become an expansion of Ecole Bilingue, as Peaches Records has now moved into the larger building next door. (image via Google)

The former Top Drawer annex building on Magazine Street will become an expansion site for Ecole Bilingue de la Nouvelle Orleans, and the school will hold a meeting tonight to share its plans with neighbors.

The building at 4310 Magazine Street was most recently the temporary home of Peaches Records, which spent the first part of 2016 there but moved into the larger space next door at 4318 Magazine in late July. Ecole Bilingue has since been granted use of the space, and plans to use it as an auxiliary building with a library, cafeteria, play space and art room, according to a letter sent to neighbors. The recreational area in the front will not be a gymnasium, said principal Pauline Dides, but more a space for basic physical education classes.

No work has begun on the building yet, Dides said in a phone interview Friday morning. The French-immersion school hopes to begin renovations in the spring to be open by the start of classes in fall 2017.

“This is the very beginning of the project,” Dides said.

For starters, the business zoning of the property does not allow for school use, so Ecole Bilingue must apply for a land-use change through the City Planning Commission. As part of that process, school officials are holding an information meeting at 6:15 p.m. today (Friday, Sept. 16) at the main campus at 821 General Pershing Street.

The Magazine Street expansion is the latest in a series of moves by the school spreading itself around General Pershing Street. In 2014, Ecole Bilingue moved offices, a teacher’s lounge and a handful of classrooms across the street into the former St. Henry’s rectory, possibly saving it from a fate neighbors feared was leading toward demolition. The following year, a long-running controversy over the demolition of a private home at 820 General Pershing led to Ecole Bilingue taking over the space as a school garden, again to the praise of neighbors who worried it would become a parking lot.

Those moves do not represent a direct effort to grow the student body, Dides said, but more to give more space for the functions the school already provides.