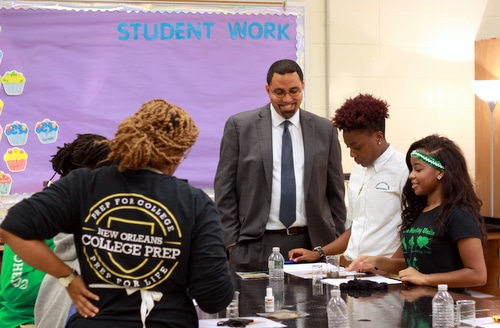 When U.S. Secretary of Education John King visited Walter Cohen College Prep High School on Friday afternoon in recognition of its dramatic increase in test scores, former board member Kenneth Polite asked him one of the most difficult questions facing the New Orleans education landscape: Why are the city’s public schools so segregated, and what can make them more diverse?

Even in a city hailed nationally for its gains in public-school student proficiency, Cohen stands out for its dramatic improvement from one of the most reviled, lowest-performing schools in the state to a ‘B’ performance score in a mere four years. In a roundtable discussion with King, Cohen school leaders and students, Polite asked why the diversity in New Orleans schools has not begun to increase.

“We’re basically in a public school system now that is segregated,” said Polite, previously the chair of the New Orleans College Prep governing board and now U.S. Attorney in New Orleans.

More than three-fourths of New Orleans schools are at least 95-percent black, according to New Schools for New Orleans, but those that do draw larger populations of white students often have far fewer black students than the city as a whole — Lycee has 17 percent black students, Lusher has 28 percent, Ben Franklin High has 33 percent, Hynes has 39 percent and so forth. The New Orleans College Prep charter network that governs Cohen and two elementary schools has been aggressive over the past year in trying to raise the economic diversity in its campuses — specifically by launching and then expanding preschool programs that include tuition-based seats, aiming directly between the free seats for low-income families offered at some schools and the high-priced ones at private schools that are out of reach for the middle class.

Ben Kleban, founder of the College Prep network under whose governance Cohen shed its “failing” status, agreed that the issue has yet to draw enough attention in New Orleans.

“The data suggests that — despite what is arguably the most remarkable decade of academic progress of any school system in history — we haven’t really seen much change in demand from middle class community to enroll their children in public schools,” Kleban said. “I think it’s probably one of the most important questions for the city in the next couple of years — what’s it going to take to have a public school in every neighborhood that everyone wants to go to?”

The Obama administration agrees as well, King told the panel convened at Cohen. Earlier this year, the President proposed a $120 million program called “Stronger Together” that awards grants to school districts for efforts to integrate their student populations voluntarily by socioeconomic levels, which often results in racial integration as well.

More than 90 school districts already have efforts underway, King said. Some use targeted programs in the arts or foreign languages to attract a broader spectrum of students. Others, like Cambridge, Mass., or Hartford, Conn., specifically use socioeconomics as they assign students to schools.

“There are a number of examples of different approaches. What we want to do with the Stronger Together initiative is invest $120 million into expanding or accelerating those kinds of initiatives,” King said, noting that bills creating the program have already been introduced in the House and Senate. “I think there’s real momentum around this work, and hopefully if we are successful later this year in a budget agreement including the Stronger Together initiative, we’ll be able to accelerate the pace at which we move toward more diversity.”

Decades of research show the benefits of a diverse socioeconomic school environment for all students — not just the poor ones, proponents say.

“The issue of socioeconomic, racial, gender diversity is absolutely critical to the future success of our young people,” Polite said. “We are increasingly a more diverse world, so to better prepare them for that world, we have to begin the process of engaging a diverse as population as possible.”

Kleban will soon be leaving the charter network he founded to take a seat on the Orleans Parish School Board, and said he intends to continue exploring the issue at the citywide level. But any future adjustments to the school-assignment system must also maintain parental choice, while continuing to improve outcomes for at-risk students, he said.

“It’s important to honor and respect our system of choice,” Kleban said. “I do think we need to come up with strategy to promote our community to make that choice, the choice to go to their neighborhood public schools.”

Reconvening a 21st Century conversation on integrating school will be difficult, Kleban predicted, with the potential of revealing “implicit biases” even for those who have an appetite for it. One high school junior, Duat’e Martin, recently confronted him on the topic after Cohen was selecting “student ambassadors” to visit area middle schools to recruit students to Cohen, Kleban said. All the schools the Cohen students were slated to visit were nearly all-black, just like Cohen, Martin pointed out.

“My idea was to go to those other schools, instead of schools that look like us, in order to create a more diverse program, to reach out to others who don’t have the same ethnicity as us,” Martin said. “You never know until you try.” 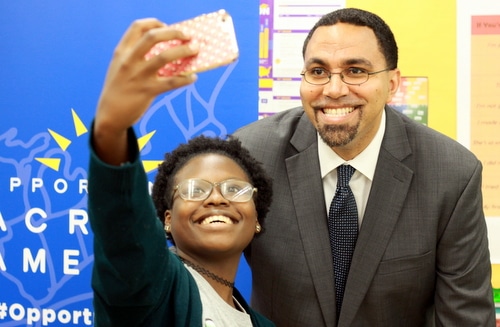 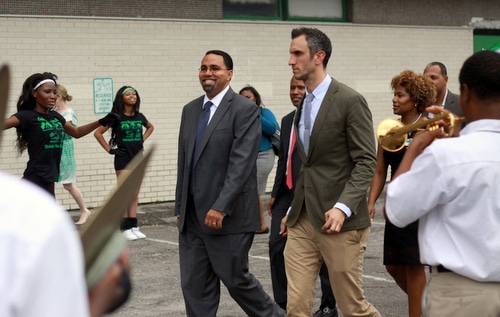