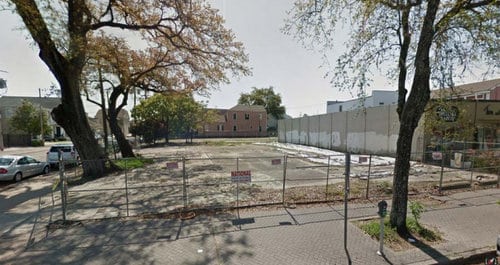 The corner of St. Charles Avenue and Melpomene Street, slated to become a temporary parking lot for Lula restaurant. (via City of New Orleans) 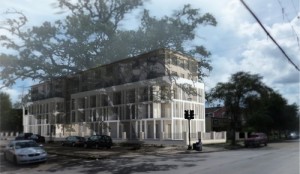 The Halpern family that owns the property on St. Charles Avenue that will become Lula Restaurant Distillery and, later, the expanded Prytania Park Hotel is seeking permission to convert a vacant lot into temporary parking for patrons and customers while development is underway.

The development of the block is planned to unfold in several phases. Lula broke ground in May for its location in the former Halpern’s furniture store at 1523 St. Charles Avenue, with plans to be open by October. The expansion of the Prytania Park Hotel into the new Avenue Oaks hotel will then proceed in several stages, starting with a new building on the corner of St. Charles and Melpomene connecting to the Prytania Park Hotel on the back of the block, followed by a second building on the Terspichore side.

Meanwhile, the three vacant lots at the corner of St. Charles and Melpomene Street have a combined area of 13,000 square feet, and the family seeks to convert them into fenced-in private parking for the restaurant and the Prytania Park hotel, they told the City Planning Commission this week. The lot would be in place for two years, relieving some parking pressure, until the new hotel with its own parking structure is built, the developers say.

The developers’ request was on the agenda for the City Planning Commission on Tuesday, but halted when city staff members discovered that the parking lot would cross what property maps show as an alley.

“The proposed parking lot development would cross a common alley which runs parallel to St Charles Avenue behind the parcels fronting thereon,” according to the City Planning Commission staff report. “The staff informed the applicant that they would need to furnish written consent of all property owners bordering the common alley to use the space for the proposed parking lot.”

The City Planning Commission then voted to postpone a discussion of the request until that documentation can be completed. 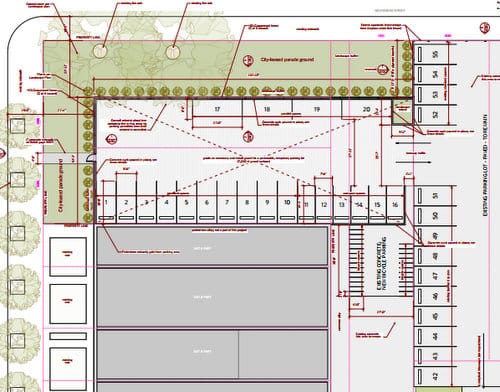 A diagram of the proposed temporary parking lot by Studio WTA. (via City of New Orleans)