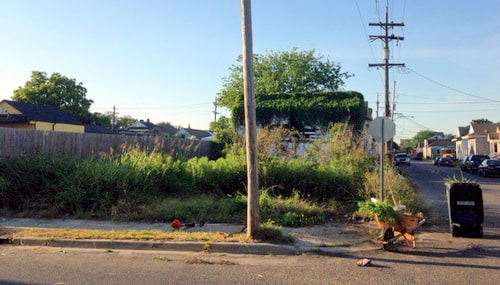 As summer’s sizzle dissipates over the coming weeks, the back-to-school throngs may muse on their most recent season away from academia, and some may even have it as their premiere assignment upon recommencement.  While I don’t really recall in my younger years a time when this was asked of my fertile student mind, my 42-year-old memory ain’t what she used to be.  So color me pseudo-nostalgically amused when my oldest had this very task put to her and she wrote about our family train trip to Chicago.  Which I totally dug too.  Except, and in honest reflection, my real takeaway for summer 2016?  Pecking away, hours over days and largely singlehandedly, at an overwhelmingly under-maintained vacant corner lot in my neighborhood.

Bottom line: I snapped.  I couldn’t take it anymore.  I got all Network on this behemoth of overgrowth, harboring all the years of refuse, beer bottles, sodded styrofoam, spent syringes, and a seemingly endless collection of tossed tires and beyond repair furniture.  And oh the mattresses!  Oozing over sidewalks and lushly spilling into the streets.  One pauses to wonder albeit without gravity, “Isn’t the city going to do something about this?”  Then one recalls “No, this is New Orleans, where a month without a boil water advisory is like a gold star on your homework. Trash is our brand, sadly.”  And clearly the delinquent but titled property owner was not actively in the picture.  So, what to do?  Nothing?  I could no longer do nothing.  So I started.

I rolled up early one May morning armed with hydration, sunscreen, a smattering of yard tools and volunteer garbage cans.  Weeds pulled, vines yanked, and repetitive flat shovel scrape and drag across the asphalt surface.  Looks aplenty from passersby, some trading morning pleasantries, most wondering “What that crazy white boy doing.”  The first day’s dent could hardly be described as such.  The results akin to one of those visual games on a kids paper restaurant menu where discerning the subtleties amounts to two burgers differentiated by one having a sesame seed bun and cheese and the other not.  They’re both still burgers, and I’d only just started undressing it. 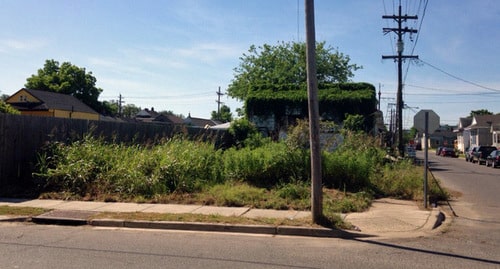 Every five to seven days or so I’d arise before sunup, cup of stovetop coffee down the gullet, and alit into dawn’s darkness wary of the leaching rays of the oncoming day.  Most days the neighborhood crackheads would make random if fleeting conversation with me, often along the lines of subtle discouragement but usually strung together indecipherable ramblings.  I developed a pleasant repartee with the mail carrier, sharing my goal of clearing the sidewalk for her by end of August.  Both of us were unsure of just how possible that might be, given the solo resource, myself.  Today is August 24th, so take note trusty timekeepers: the month ain’t over yet. 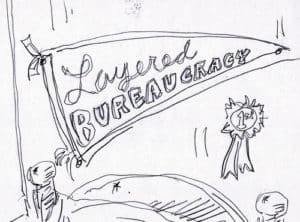 The award nobody gets or even wants. (illustration by Jean-Paul Villere)

So what’s the lesson here?  I don’t know that there is one.  Maybe that a change in process is needed.  Or maybe that while there are systems in place to remedy the cityscape of forgotten lots and blight that ultimately it remains archaic and frankly too slow. Tax sales have vacillating benefit if they’re seen to fruition, which in my experience has to be less than half the time.  And Thursday sheriff’s sales actually can move property back into commerce but frankly the city isn’t aggressive enough.  Ultimately placing liens on the property without actually cleaning it only adds insult to injury and is frankly a ham-fisted, careless approach to sought equilibrium.  Historically there are no pennants hung with care over bedframes rah-rah-ing team Layered Bureaucracy.  So which team should we be cheering for?

While you chew on that, I’ll be tilting at my windmill for my weekly date down my street. 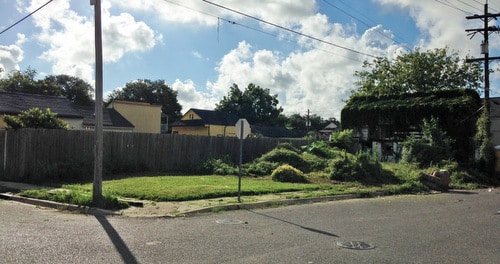 4 thoughts on “Jean-Paul Villere: How I spent my summer vacation”