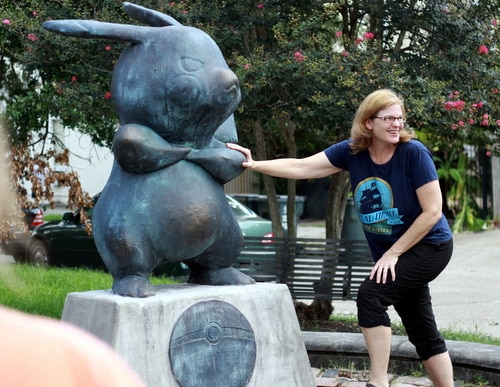 The Lower Garden District stands out among New Orleans neighborhoods for its elegant parks and statuary, such as the elegant fountain at Coliseum Square, the historic Margaret Haughery statute dedicated to the “Mother of Orphans,” the classical “Birth of a Muse” … and now, Pikachu.

Neighbors around Coliseum Square woke up Sunday morning to discover a larger-than-life Pikachu statue planted in an empty, defunct fountain on Terpsichore Street, about midway between the muse on Prytania Street and the park.

“We saw it in the morning, but we didn’t see it the night before,” said Gabriel Wimmer, whose balcony on Terpsichore directly overlooks the new statue. “It’s a kick. It’s cool to see people coming into the neighborhood.”

With the sudden dominance of Pokemon Go in Internet culture, news of the statue drew curiosity seekers even faster than a Pokemon lure. By Monday morning, a post about it on a Reddit forum about Pokemon Go had already drawn more than 5,000 votes of approval, and people from around the city were coming to see if it was real or just a Photoshop hoax. 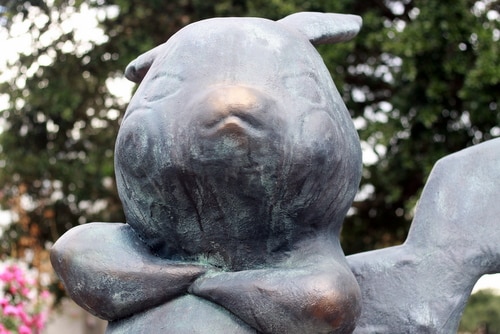 Madeline Dickson, an Algiers Point resident, said she had to make a stop in the Lower Garden District on her way to work Monday morning to see for herself after reading about it on Reddit.

“I thought, ‘Oh my God, it’s in our city,'” Dickson said. “I think it’s really cool. It’s amazing someone took the time to make this.”

The statue seems to have been specifically intended for its Terpsichore Street location, with a base sized to fit that inside the old fountain space. The statue itself appeared to be hollow and made of fiberglass, onlookers speculated, though its appearance is meticulously burnished to appear as aged as any New Orleans landmark. The only clue to its creation is a hashtag emblazoned on the back of the base, #Pokemonument.

The Coliseum Square Association makes upkeep of the neighborhood parks and fountains a central part of its mission, and Pikachu had already drawn their interest as well. Andrew Yon, who has spearheaded fountain maintenance and restoration in Coliseum Square for years, said he wasn’t bothered by it.

“I’m not a PokemonGo person, but think it’s kinda cool,” Yon said in an email to Uptown Messenger. “I assume it’s not permanent and that whoever put it there will take it away at some point. If they leave it, maybe it could become part of that operating fountain one day.”

Karon Reese, vice president of the neighborhood association, visited the statue Monday morning. The association has no official jurisdiction over the space and any ultimate decision will be up to the city, Reese said, but she said she sees it as an asset.

“It’s funny. It’s one of those New Orleans surprises we just come to expect after a while,” Reese said. “Right now, it’s a defunct fountain. It’s actually on our list of fountains to get running again. So as long as it’s sitting here without any water flowing, it’s OK with me. … What I think is kind of good about Pokemon is the way it brings people out into neighborhoods, and we’re always thrilled to have people in our neighborhood and in our parks.” 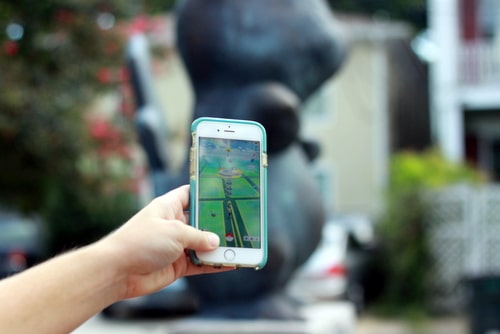 Madeline Dickson checks out the Pokemon gym at the Pikachu statue on her phone. (Robert Morris, UptownMessenger.com) 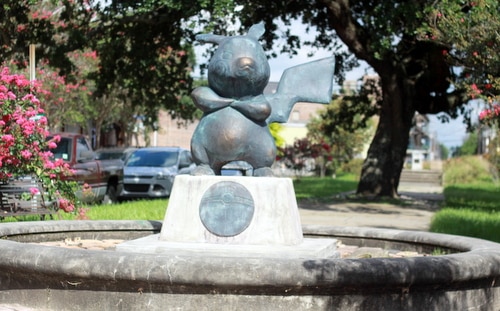 The Pikachu statue stands guard over Terpsichore Street, in the same block as the “Birth of the Muse” statue on Prytania. (Robert Morris, UptownMessenger.com) 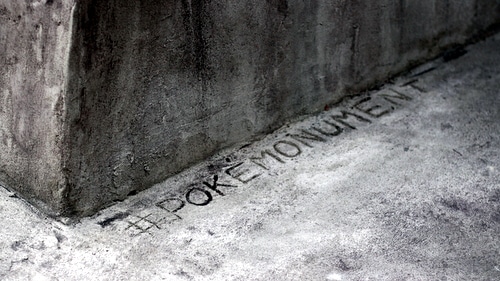 The statue is emblazoned with the logo #Pokemonument. (Robert Morris, UptownMessenger.com)