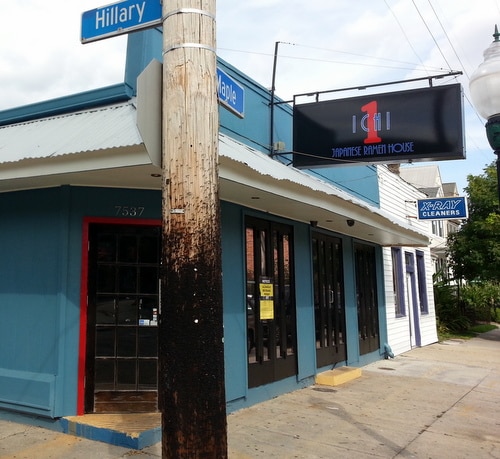 The owners of Three Muses in the Marigny are planning a location on Maple Street. (Robert Morris, UptownMessenger.com)

Popular Marigny gastropub Three Muses plans to open a new location on Maple Street, according to plans filed with the city.

The new location is planned for 7537 Maple Street, the location at the corner of Hillary Street that formerly housed The Doors bar and more recently Ichi Japanese Ramen House, according to city documents. A business license for Three Muses is still pending at the address, city documents show, and the business has also applied for an alcohol license from the state for the location, according to signage in the window.

Kimberly Patton-Bragg, manager of Three Muses, said Thursday morning that she could not publicly discuss any details of the project yet.

As word spreads about the project, Hampson Street resident Dorothea Martin said neighbors are excited about the prospect of a new restaurant that represents a break from the usual university-oriented establishments at that corner.

“We’re looking forward to a new restaurant, because it’s not just a bar,” Martin said.

The owners of Three Muses have long had their eye on an Uptown expansion. In 2013, they proposed an expansion to the former Dunbar’s building on Freret Street that would focus more on dining and less on drinks and music than the Marigny location. The sale of the building stalled over legal issues, however, and the Three Muses owners decided to refocus elsewhere the following year.