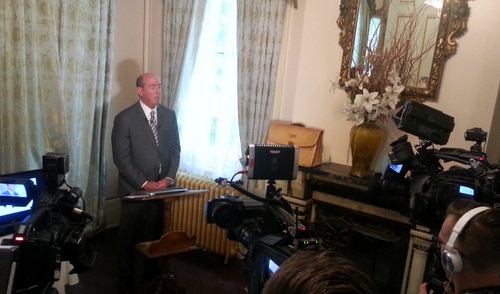 Attorney Michael Whitaker describes the beginning of mediation in 215 claims against the Sewerage & Water Board over damages allegedly caused by the SELA drainage projects. (Robert Morris, UptownMessenger.com)

A retired federal judge has been appointed to mediate $86 million in damage claims from property damage from the ongoing SELA drainage projects along four major Uptown corridors, attorneys announced Monday.

The lawsuits were first filed by three families in May 2015, with California-based attorney Michael Whitaker alleging that the construction of new drainage canals on Prytania Street and South Claiborne, Jefferson, Napoleon and Louisiana avenues had damaged the homes nearby. That kind of damage to private property was deemed a taking (similar to eminent domain proceedings) in a previous iteration of the SELA project in Broadmoor, Whitaker argued, and the property owners were entitled to compensation without having to prove any negligence.

The Sewerage & Water Board has its own process for filing damage claims, but as the number of property owners joining Whitaker’s lawsuit grew, the agency filed responses casting blame on both the U.S. Army Corps of Engineers’ contractors for causing the damage, or the residents themselves for failing to properly maintain their property. In an order filed in late June, however, U.S. Magistrate Judge Daniel Knowles III says that the property owners’ claims against the S&WB are “legally distinct” from the agency’s claims against the contractors.

“The most efficient course of discovery is to proceed on two separate tracks until further order from the court,” Knowles writes.

The property owners’ claims will be evaluated in groups of 20, with the first group expected to be completed by the end of 2016, and the remaining groups finishing in subsequent months until the end of 2017. Retired U.S. Judge Michael Hill (who previously served in the Western District of Louisiana in Lafayette) will be the mediator for the claims, the order states.

Whitaker called the mediation order a “very positive step forward” for his clients.

“This order goes a long way toward healing the crisis caused by the construction methods used by the SWB, and ensuring that justice will be served for these long-ignored residents whose homes have been ruined by this chaotic project,” Whitaker said in a news release.

The damage claims now number 215, and average around $400,000 per property, Whitaker said, resulting in about $86 million in potential damages. Whitaker has said that the budget for the project already sets aside money to pay claims.

Meanwhile, many property owners whose homes have been damaged or even rendered inaccessible by the construction have also received substantial increases of 40 to 50 percent in their property-tax assessments this year, Whitaker said. Instead of forcing them to individually challenge their assessments, Whitaker called on the New Orleans City Council to rescind those increases together.

Sarah Lowman, an attorney who represents a number of businesses affected by the construction and a Prytania resident herself, also decried the property-tax increases.

“These assessments are unfair and excessive because these properties have suffered significant structural damages and lost value, and our neighbors have suffered disruptions of basic services (such as electricity, telephone, water pressure and garbage pick up) during the construction that has exceeded all promised completion dates — in some areas for over 3 years — without parking access to their driveways or streets,” Lowman said. “These residents have not had a moment’s peace from the constant loud industrial construction noise, house-shaking vibrations and dirt clouds.”