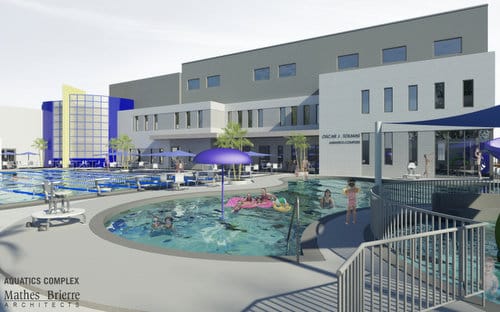 A rendering by Mathes Brierre Architects of the expanded swimming area proposed for the Jewish Community Center. (via City of New Orleans)

The Jewish Community Center received initial permission Tuesday for an expansion that will reconfigure its popular pool area and add a new building, and city officials excused the center from having to add any new parking despite at least one neighbor’s request for it.

The Jewish Community Center plans to reconfigure its pool area and add a new, three-story 13,841-square-foot building at its Uptown campus at 5342 St. Charles Avenue, officials said. The reconfigured pool will eliminate the deep-diving area and separate the lap swimming from the children’s areas, said Leslie Fischman, the JCC executive director in a meeting Tuesday before the City Planning Commission.

The site plan for proposed expansion of the Jewish Community Center. (via City of New Orleans)

City planners had said that given the size of the new building, the JCC would need to add 46 additional parking spaces. Todd James of Mathes Brierre architects asked the City Planning Commission to strike that requirement, saying that he doesn’t believe the reconfigured spaces will actually draw many more people to the center at once.

The 46 spaces is probably an over-estimate, James said, because it doesn’t take into the daycare or fitness center uses of the space, which require less parking per square foot than the “community center” classification used for the 46-space calculation. Much of that additional parking is already satisfied by agreements with neighboring De La Salle, James said, and the upcoming end to construction on Jefferson and St. Charles avenues will restore 30 off-street parking spaces as well.

“We’ll be comfortable with the parking once the streets open,” Fischman said.

One neighbor, Frank Dudenhefer, said he finds it hard to believe that the expansion to the center won’t draw more traffic. The center can already strain the neighborhood with parking, he said, and this expansion provides an opportunity to look for a solution, since nearly 200 parking spaces are already grandfathered.

“I’m not opposing the application and the use,” Dudenhefer said. “I’m asking that commission go back with the JCC and find a solution to that parking problem.”

City Planning Commissioners, however, agreed with the JCC arguments that the expansion will not increase parking needs. Requiring the parking would diminish the other uses of the JCC, they said, and it is a nonprofit serving the public, not a private interest.

Commissioner Eugene Green said he believes that the JCC is actually welcomed by the neighborhood, as proven by the overall lack of voices against the project.

“I think that if there was significant opposition to the way that the Jewish Community Center has been doing things, there would be a lot of opposition here today,” Green said.

Green’s motion to allow the expansion without the additional parking passed, sending it to the City Council for final approval.

The City Planning Commission heard a handful of other items around Uptown on Tuesday as well: