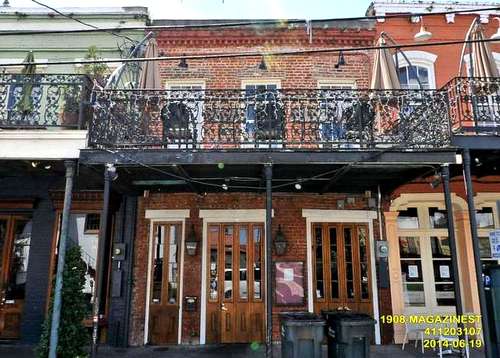 The Hooka House cafe at 1908 Magazine Street is on track to extend its legal operating hours until midnight on weekends. (via City of New Orleans)

The Hookah House Cafe on Magazine Street is on track to extend its legal operating hours until midnight on weekends, after overcoming an unusual objection from the building’s owner.

The City Council first awarded permission 15 years ago to Steve McKenna’s restaurant Sugar Magnolia to serve alcohol in the building at 1910 Magazine Street (despite the opposition of the Historic Magazine Row Association), but included a restriction that the business must close at 10 p.m. nightly.

Hookah House took a five-year lease on the building in 2013, but the recent updates to the Comprehensive Zoning Ordinance changed the law so that standard restaurants could stay open until midnight on weekends, said attorney Michael Letourneau. Hookah House, however, remained governed by the former demand that it close at 10 p.m., prompting the request for a change to stay open on midnight Thursday, Friday and Saturday nights.

“All we’re seeking to do is to amend the preexisting conditional use permit from 2001 to align with the hours for any standard restaurant in the area,” Letourneau said before the City Planning Commission on Tuesday. “We don’t believe it will have any impact on the neighbors.”

The request had first appeared on the agenda of the July 12 meeting, and drew opposition from one person — the building’s owner, Mack Groves. Groves had written to the planning commission saying that he had received complaints from the neighborhood that the business was staying open long into the morning hours, and even hired an investigator to visit the business over several nights in January.

“The reports and video prove Hooka House Cafe in full operation way past 12:00 all three nights,” Groves wrote, noting that the business’s Facebook page even lists its closing time as 2:30 a.m. “I respectfully request revoking all licenses and closure of Hooka House Cafe.”

Groves did not reappear at this week’s meeting of the City Planning Commission, however. Contacted by phone Wednesday morning, Groves said he had decided that had had no issue with the actual request before the City Council, and would pursue his frustrations with the business’s operations with his tenant directly.

“I wouldn’t have any problems if they stay within those timeframes,” Groves said.

Without Groves’ opposition, no one else spoke against the request on Tuesday. Letourneau told the City Planning Commission that at a recent public meeting about the request, the only question was to confirm that the midnight closing time was standard under the new laws, and that the questioner must have been satisfied since no one showed up on Tuesday.

With that, the City Planning Commission voted unanimously in favor of the request, sending it to the City Council for final approval.