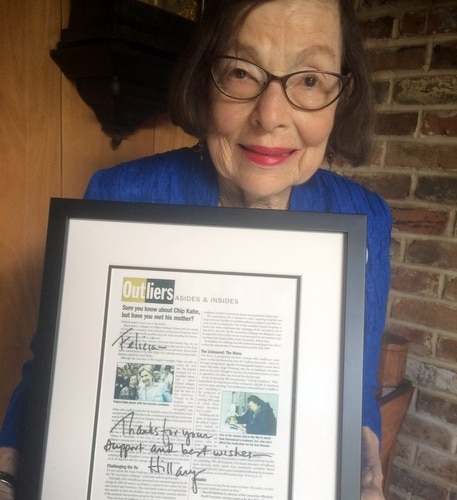 Most people about to celebrate their 90th birthday probably just want to take it easy, but not Felicia Schornstein Kahn. A passionate feminist, political activist and a lifelong advocate of citizen education and social justice, Kahn is preparing to attend this month’s Democratic National Convention in Philadelphia — her tenth since 1976 — where she will be the second oldest delegate pledged to Hillary Clinton. A 93-year-old Ohio woman beat Kahn out for the top spot, according to Clinton campaign official Harrison Morgan.

Kahn’s route to political activism actually had its beginnings in Brookhaven, Miss., where her grandfather Samuel T. Alcus made his fortune in lumber, manufacturing and investments. His success provided young Kahn and her family a comfortable life in Uptown New Orleans during the 1930s and 1940s. Kahn was born with an inquiring mind. She attended Newman school all 12 years and went on to Newcomb College where she studied sociology and psychology.

Kahn had an epiphany her senior year at Newcomb when she met well-known preservationist and League of Women Voters president Martha Robinson. “I was very intrigued by Martha. She was a political leader before women were supposed to be,” said Kahn. “Martha began the League of Women Voters chapter in New Orleans because she wanted to get rid of dirty politics. Then she went on to save the Vieux Carre by stopping the Riverfront Expressway.”

Was Robinson Kahn’s role model? “I didn’t know what a role model was. In the late 1940’s Newcomb women were supposed to get married and have children with their Newcomb degree.”

Though Kahn did marry Beaumont, Texas, native Charles Kahn Jr. soon after college, she was also determined to enter the workforce. Kahn took a job as a welfare visitor with the city’s department of public welfare, considered acceptable employment for the ambitious Newcomb grad. She quit working when her child Chip — now a Washington, D.C., trade association president — was born in 1952. Pushing Chip in a stroller, Kahn campaigned for Mayor Chep Morrison and for Robinson, then a candidate for New Orleans City Council.

Having part-time help in her home provided Kahn the opportunity to find her passion at the League of Women Voters. Volunteering with the League gave Kahn a solid background in all the important issues of the day and introduced her to the city’s first wave of women political leaders including Robinson, Mathilde Dreyfous, Betty Wisdom, Margaret “Pokey” McIlhenny, Carolyn Gay “Blondie” Labouisse, Mildred Osborne, and Marion Abramson.

Often with a toddler on her knee, Kahn served the League in many capacities, including president, and was always available to pinch hit when extra help was needed. “I worked at the League’s office in Gallier Hall every weekday. One of my special areas of interest was voter service. We made sure the polls opened at daybreak so that working people could vote early.”

Among the League’s most popular programs was its monthly meetings in neighborhoods where women of similar interests could have a voice. “These extraordinary gatherings took place at a time when most women were still not working outside the home and paved the way for many future leaders,” she said.

At a national League gathering in the late 60s, Kahn first attended a meeting targeting women’s issues. “It was both exhilarating and frightening. I was amazed that some of these women had to get their husband’s approval before they could become involved in outside activities,” Kahn said.

Often the League’s goal was to identify, research and craft a solution to a specific problem in hopes that it would get picked up by a man who could guide it to fruition. “Women in that era never expected to get the recognition they justly deserved.”

After leaving the League’s board in 1969, Kahn became active in many other organizations including the New Orleans Coalition, the Independent Women’s Organization, the National Women’s Political Caucus, Common Cause, and the National Council of Jewish Women.

Kahn was a volunteer in Moon Landrieu’s campaign for mayor in 1970 where she took on all assignments, including licking envelopes. “I was so pleased that Moon’s campaign included members of the total community, which was a first,” explained Kahn. Along with Carolyn Kolb, she later clipped newspaper articles for Congresswoman Lindy Boggs and others.

In 1972, she worked with the biracial National Women’s Political Caucus to encourage women to attend the Democratic convention. “We were just starting to realize how important the conventions are to the country’s future.”

Kahn joined Jimmy’s Carter’s campaign in 1976 and was a Carter appointee to the convention’s Rules Committee. She also began to meet people from around the country who thought differently about women’s roles. That same year, Kahn threw her name in the race for the Louisiana Legislature but lost to Clyde Bell. “I ran a low-budget campaign but it was a great experience.”

In 2010, Kahn revived the Independent Women’s Organization after a period of inactivity and became its president at age 84. Kahn thought she might be too old to be in charge, but the members unanimously selected her. IWO is now almost 250 women strong.

Kahn feels blessed to have witnessed all the strides women made during the last 90 years. “Women play an important role in society. It is absolutely essential that a woman be elected president. Electing male presidents every four years is just wrong. The people in charge of our country should look like the population. You can’t really have representative government without true representation of the population,” Kahn said.

Also a Hillary Clinton delegate in 2008, Kahn met Clinton at the Denver Democratic Convention. When Kahn grew ill and missed a floor vote, Clinton sent her a personal note which now hangs in Kahn’s home. “Hillary has been well-trained to be president and will do an excellent job,” she said.

Kahn will be sharing a room at the Philadelphia convention with her son Chip and grandson Zack. “As long as I can do what I’m doing, I’m going to keep on doing it,” Kahn replied.

LESLIE ELLISON TO KICK OFF SCHOOL BOARD RE-ELECTION CAMPAIGN TONIGHT

OPSB member Leslie Ellison will celebrate her birthday and kick off her campaign for re-election tonight at the New Orleans Jazz Market. Ellison represents the voters of Algiers on the School Board and formerly served as its vice president.

One thought on “Danae Columbus: Felicia Kahn still going strong after 90 years in the movement”