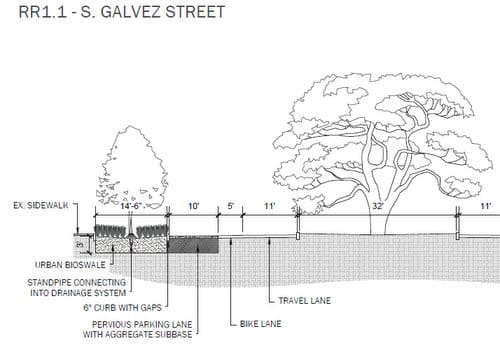 This diagram shows the drainage improvements on one side of Galvez Street as part of a $51 million drainage project around Central City. (via City of New Orleans)

A new $51 million drainage project along Martin Luther King Boulevard will help prevent flooding from heavy rains around the Central City area — but instead of simply trying to push water away through underground canals, it will absorb and store it according the most current thinking on stormwater management in New Orleans.

“It’s actually taking care of the Central City area,” Cantrell said. “Central City is going to get major improvements on MLK as it aligns with pumping station No. 1.”

For information about some of the other drainage projects being authorized, see articles from our sister publications:

The project is intended to keep building on the drainage improvements around Uptown through the major new SELA canals being built on Jefferson, Napoleon, Louisiana, and South Claiborne avenues, Cantrell said. But instead of simply building more canals, the Martin Luther King Boulevard project will incorporate much more current ideas about “Living with Water” — specifically, the notion that pumping water out of the soil ultimately has detrimental effects on the soil itself, accelerating the rate at which the land sinks and causing other problems.

The Martin Luther King project will incorporate both a bioswale along side the sidewalk, which filters water back through the soil, and permeable paving in the parking lane, allowing water another avenue into the soil. Excess water can still reach the traditional drainage system, but some will be absorbed and stored in the soil first, slowing the rate of subsidence.

“It’s all going to tie in together,” Cantrell said. “When you have all these systems working, it helps to mitigate flooding.”

(As an aside, Cantrell noted that the work on Martin Luther King Jr. Boulevard will be coordinated with the upcoming repaving of Jackson Avenue, an unrelated project, so that nothing has to be redone. “It’s not like we’re going to lay pavement and dig it back up,” Cantrell said.)

The change in thinking behind the projects formed a major theme of a meeting of the City Council Budget Committee on Thursday, as city officials and council members discussed the scope of the effort. Key to its success, they said, will be helping residents understand what the new structures do and how to help maintain them.

“What we’re about to do is kind of counter-intuitive to the way we’ve lived,” said Cedric Grant, executive director of the Sewerage & Water Board. “Everybody is accustomed to trying to get the water away from you, not living with it. We’re about to start a new world here where it’s about living with it, so we really want to have people clearly understand what it is we want to do so we can have them understand how we can best serve them with these projects. There’s going to be more than a little stakeholder involvement. We’re going to get down to the street level, down to, ‘This is how this works, how it can serve you.’ It’s a really different thought process that we have entered into.”

As the project moves through the design phase, the council emphasized the need to begin holding public meetings about the details of the project.

“I do believe that there are a lot of times you can have really excellent ideas, and if people aren’t educated and don’t understand why it’s happening, they feel like something’s being done to them, as opposed to something’s being done for them,” said Councilman Jason Williams. “If they play a role in that sort of evolution, we can get folks to truly understand why our streets don’t last as long as other streets in other cities and how water affects that.”

At the same time, Cantrell said, it is really New Orleans residents — not officials — who deserve the credit for moving the city in this smarter direction. It was their demands after Hurricane Katrina that the city begin learning to live with water that drove the conversation to this point.

“The focus on not only stormwater management but real sustainable practices post Katrina was driven by the neighborhoods,” Cantrell said. “I’m glad that we’ve caught up. We’ve started to listen and put resources to action. This is what these projects really symbolize to me, because it started at the grassroots level.”