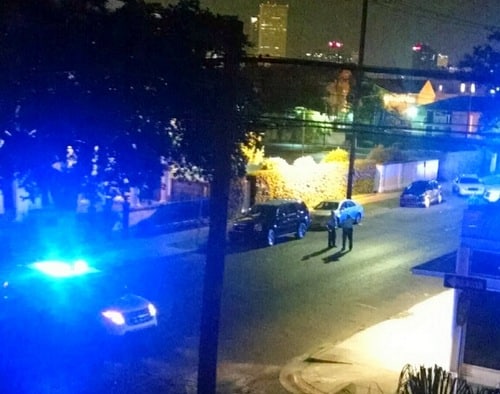 Police investigate reports of gunfire in the 2200 block of Prytania Street. (photo by Owen Courreges)

I awoke as the shots rang outside my bedroom window in the wee hours on Saturday. By the time I emerged from my house, wearing a garish, plaid Sears robe with my trusty shotgun in hand, there was nobody to be seen save a lone security guard. He crept forward from Eiffel Society, a venue down the street, his pistol drawn and at the ready.

The police arrived, shutting off the 2000 block of Prytania, but aside from collecting a few random shell casings there was ostensibly little investigation to be performed.

Naturally, I was unnerved by the experience. However, my fear was not turned against a mere instrumentality. Alas, the same cannot be said of the reaction of many Americans to the mass shooting that took place a week ago in Orlando.

The media has been at the forefront. The Times-Picayune published an ill-worded staff editorial this past Wednesday advocating for a new assault weapons ban. It emphasized the need to “outlaw weapons and ammunition that are meant to inflict the most harm possible,” claiming that “[t]hese are not guns favored by hunters or needed for self-defense.”

This type of talk is, to put it mildly, useless dreck.

Perhaps the most insipid and ill-conceived legislation ever created was the 1994 assault weapons ban. You see, “assault weapon” basically just means a scary-looking gun. It isn’t defined by firepower or the danger actually imposed; rather, it is based on cosmetic features such as folding stocks, threaded barrels, flash-suppressors and the like.

Accordingly, an “assault weapon” is not measurably more dangerous than its many counterparts, as the bulk of mass shootings demonstrate. Selective, randomly-defined bans make no one safer.

Thankfully, even with the ranks of the Times-Picayune’s newsroom, there was at least one voice of sanity. Staff writer Robert McClendon opined in the comments that the real question we should be asking is whether an assault weapons ban would serve its intended purpose.

“If the purpose is to limit, in any meaningful way, the ability of a madman or religious fanatic to kill large numbers of people, then I think the answer is clearly no,” McClendon wrote. “If the purpose, on the other hand, is simply to say we did something or move the needle in some otherwise amorphous way, then sure, yeah, let’s go for it.”

That’s the essence of the problem. An assault weapons ban is more about winning a victory – any victory – for gun control than it is about having any impact whatsoever on violent crime.

And as with any victory, there are opportunity costs.

Instead of arguing measures that accomplish nothing, we could be discussing real criminal justice reforms that actually impact the violence on our streets, but instead we’re discussing laws with no more substance than a Tinder swipe.

There are other measures at the federal or state levels that may actually reduce the use of guns in violent crimes. For example, it is a felony to submit false information on a background check. In 2010 alone, 80,000 people lied about their criminal histories on background check forms. However, only 44 people were actually arrested for doing so.

As a consequence of this, many states have enacted so-called “lie and try” laws or policies, including Tennessee, Pennsylvania, California, Colorado, Illinois, Utah, Oregon, and Virginia.

The effort to prosecute felons who attempt to buy guns is uncontroversial, supported by both gun control advocates and the National Rifle Association. However, the effort hasn’t received a tenth of the attention that the assault weapons bans or universal background checks have received, even though neither of those proposals have a direct nexus with violent criminals.

Hearing gun shots rattle off from outside my home was certainly frightening. What made me feel secure in the aftermath was the fact that I owned a firearm to defend myself.

There are those who would seek deprive me of that feeling of security, and they would not do so for the purpose of reducing violent crime. No, they would burden citizens’ constitutional rights “simply to say we did something or move the needle in some otherwise amorphous way.”

That’s just not good enough. If shills for gun control could articulate a reasoned basis for reform consistent with the constitution, I would be open to that. Their inability to do so speaks volumes.

72 thoughts on “Owen Courreges: What about a gun control law that would actually reduce gun violence?”