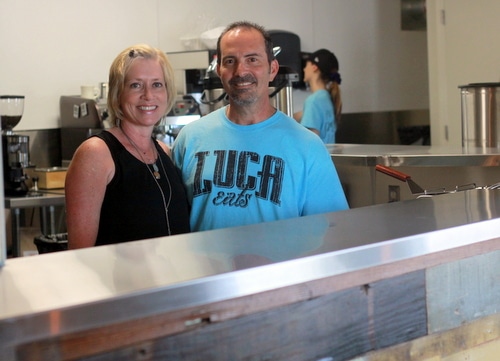 Ellen and Darryl Cortello stand behind a counter made of salvaged wood at Luca Eats. (Robert Morris, UptownMessenger.com)

After more than three decades operating restaurants in New Orleans, Darryl Cortello knew exactly what he wanted from his next endeavor — something small — so the closed little restaurant on Cohn Street in Carrollton stood out as a perfect match.

“I love the space. I love small,” Cortello said Thursday afternoon, his third day open for lunch at Luca Eats. “We wanted to keep the menu really, really small, and do it really, really well.” 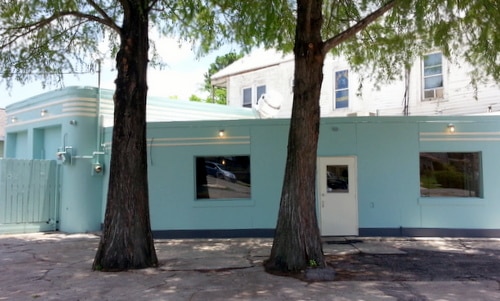 Cortello, 51, got his first job as a 14-year-old boy making olive salad for Gaspar Melito’s po-boy shop in Metairie, and went on to operate both Zeke’s in Metairie and Frankie and Johnny’s in Uptown New Orleans. He sold both restaurants several years ago, but his wife, Ellen, was diagnosed with cancer shortly afterward, so he returned to the corporate restaurant industry to support the family.

After Ellen’s treatment concluded successfully, he said he realized he was ready to return to what he knew best, neighborhood restaurants in New Orleans. They discovered the building that formerly housed Roman Pizza at 7329 Cohn Street up for sale, bought it, and began renovating it to their liking.

After selling the massive pizza ovens and removing a few interior walls, the former takeout-only spot now has seating for about 25 people, its 1,300 square feet less than a quarter of the size of his previous restaurants. Along the way, they discovered old signs and memorabilia from the building’s long history as a gas station, and reused the old tongue-in-groove boards from the walls to build the counter around the kitchen area. Now, ample light from the large windows generously washes over the dining area.

The menu at Luca Eats is a slight departure from the traditional New Orleans offerings from the Cortellos’ previous restaurants, focusing on specialty pressed sandwiches. The sandwiches include shrimp-and-grits or bacon-egg-and-cheese for breakfast to a Cuban or fried green tomato BLT for lunch (though all are available all day), and generally cost between $6 and $10. The menu has a number of vegetarian options as well.

“We just decided to fit the food to the neighborhood and the area, and the times,” Cortello said. “Everything we do is good, fresh, homemade and really done well.”

One down-home entry that Cortello is particularly proud of is the Ville Platte chicken and andouille gumbo, Ellen’s mother’s recipe, he said. On the other hand, they also make their own hummus.

The source of the restaurant’s name, Cortello said, depends on whether you ask him or his wife. He likes to think it’s a reference to Luca Brasi from The Godfather, but his wife says it’s for her Shih Tzu, who shares the same name. They plan to have photos of both Luca’s in the restaurant, Cortello said, so patrons can choose for themselves.

The restaurant is open seven days a week from 7 a.m. to 2:30 p.m. (though Cortello plans to close for Father’s Day), but is still in some ways a work in progress. While Cortello said the breakfast-and-lunch hours suit him for now, allowing him to be home with his two teenage children in the evenings, he might consider evening hours if there was neighborhood demand. The new robin’s-egg blue paint job on the outside still lacks any signage, and Cortello said he’d like to add some sort of outdoor seating as well.

Neighbors already know him from seeing him on the roof or working outside during the renovations, Cortello said, and have begun stopping in for coffee now that he’s open. The coffee, provided by the popular French Truck brand in New Orleans, is a draw on its own, he said.

One neighbor, Michelle Sartor, enthusiastically reported on the progress at the spot at the recent meeting of the Central Carrollton Association. She, too, had been walking by and stopped to talk to the Cortellos, she said, and was excited by its potential.

Those kinds of neighborly interactions are exactly what Cortello said he was excited to return to, especially after the life-changing experience of his wife’s surviving cancer. The eatery’s shirts are emblazoned on the back with the slogan, “Put on your positive pants,” and Cortello said good spirits are the core of what he’s hoping Luca Eats will provide both him and his neighbors.

“I know where I wanted to go at this point in life. I want my restaurant. I want my Jeep, and I’m getting a tattoo,” Cortello said. “What I want is to treat people like you want to be treated, so they walk in feeling great, and walk out feeling even better. That’s what it’s about to me.”