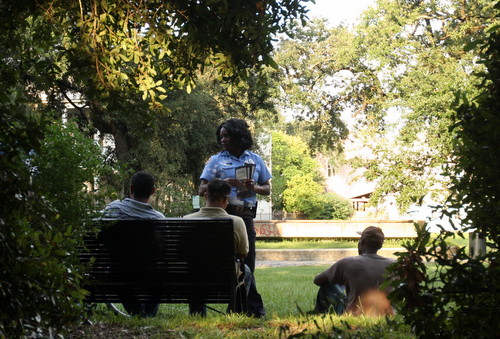 Detective Claudia Bruce hands out CrimeStoppers flyers to a group of men sitting in Coliseum Square during an anti-crime march in July 2013. (UptownMessenger.com file photo by Robert Morris)

Members of the Coliseum Square Association floated the idea of adding a private patrol in the Lower Garden District on Monday night – a suggestion that was met with both strong support and staunch opposition from residents.

Association board member Ryan Kropog presented the “rough” proposal during the association’s monthly meeting as a response to complaints neighbors frequently make about crime in the area, he said.

“People are concerned about it,” Kropog said. “I’m seeing whether or not hiring security is the right way to go.”

Kropog suggested that a private organization patrol a swath of land with boundaries from St. Charles Avenue to Constance Street, and from Calliope Street to Jackson Avenue. The area would directly meet another privately patrolled swath of land, in the Garden District, at Jackson Avenue.

Should the neighborhood association agree to boundaries, the next step would be to ask the state legislature to support the creation of the security district, Kropog explained. After that, a special election would be initiated and funded by the state, held at regular voting stations, for residents residing in the outlined district.

Based on the city assessor’s website, Kropog calculated roughly 600 parcels in the boundaries he outlined. He then based the cost of patrol on what the Garden District Security District charges, which is roughly $25 an hour per vehicle.

The GDSD uses three vehicles to patrol their neighborhood 24 hours a day, 7 days a week. Kropog made three suggestions: two vehicles on patrol 24/7; one vehicle patrolling all the time or a patrol time of 5 p.m. to 5 a.m., which would be provided at a different rate.

Using two cars to patrol the area day and night, the cost would be roughly $438,000 a year, or $730 per parcel, based on the rough calculations Kropog made prior to Monday’s meeting.

Kropog added that the district would have full autonomy to decide on boundaries and patrol service hours, and that the association could also decide whether or not to split the cost evenly by each parcel, or prorate it based on square footage.

Most of the objections to the proposal centered on cost. Some, for example, worried about how the cost would be divided, especially among owners of rental properties, who would have to decide whether or not to pass on the burden in the form of higher rent.

Others were concerned about whether added security would be effective enough on crime to justify the added expense, with one resident citing an evaluation of security districts as a whole, published by Inspector General Ed Quatrevaux.

In 2013, the New Orleans Inspector General’s Office found that added patrols didn’t appear to reduce the number of violent crimes or murders, even though it seemed to help reduce property crime.

Some countered that argument, saying that security districts had been around longer than the inspector general report, and surmising that it was “impossible” to compare statistics now to those from 30 years ago, when the Garden District first got added security.

Kropog acknowledged that the subject was controversial, especially because of the cost burden it would put on residents, but underscored that the Monday’s step was just the beginning of a process to see whether the majority of neighbors want to pay for the added security.

“Talking about money people get really emotional,” he said. “So this is something we can talk about and see if we can discuss it, to get on the same page.”

Kropog also said the association could decide when and how often a vote would be held to keep or remove private patrol, and that the organization should be careful to track crime stats, property values, rental values and other statistics to “determine we are getting our money’s worth.”