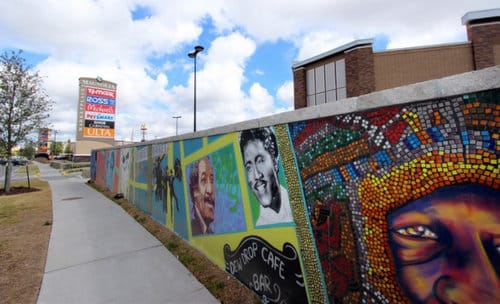 The mural adjacent to the new Magnolia Marketplace retail center on South Claiborne. (photo via City of New Orleans)

Development on South Claiborne Avenue has made significant strides in recent years, but more attention is needed to quality-of-life issues of crime, blight, panhandling and litter in order to attract more retail investment to the corridor, City Council members said.

On Thursday, City Councilwoman Stacy Head convened what she described as an annual summit before the council’s Governmental Affairs Committee about South Claiborne Avenue, which she hails as “New Orleans’ next high-quality retail corridor.” The discussion featured the heads of numerous city agencies, who each reviewed their departments’ commitment to improving and maintaining the busy stretch.

Brenda Canada, vice president for retail attraction at the New Orleans Business Alliance, said she and others had just returned from the International Council of Shopping Centers convention, where businesses are expressing increased interest in moving to New Orleans. As recently as 2011, national retailers were still asking whether the city would be rebuilt, Canada said.

“The tone has totally changed,” Canada said. “Now it’s about where people want to go and what the opportunities are here. People are talking about opening multiple units in the city, instead of just saying they want to be downtown. That bodes well for South Claiborne and other areas of the city.”

On South Claiborne, Canada said she and council members have been meeting with specific shopping center owners about attracting tenants that will draw more customers. She praised the opening of Magnolia Marketplace as a model for other property owners, and offered a slide that said retail sales there have been ahead of expectations.

“It’s really had a huge impact on that corridor,” Canada said. “Their success has spread, and opened the door for further development and upgrades.”

Much of the discussion at the summit was about maintaining the city services Head described as “the basics:” grass cutting, blight remediation, enforcement of sign laws and other issues. One small but important indicator of progress, Head noted, was the installation of overhead signs marking the names of the cross streets.

Head also lavished praise on city agencies for recent landscaping improvements around the Martin Luther King Jr. memorial, for replacing the decorative bollards that had been overturned by errant drivers, and for working with agricultural experts to treat soil conditions that were threatening some of the recently-planted trees.

“We have a reputation in New Orleans, and it’s a very well deserved reputation, of building things and planting things and not keeping it up,” Head said. “But we are changing that reputation, and that’s a corridor where I think you can show it really is different. We planted trees and we’re not just letting them die and walking away. We put bollards, and we’re not just walking away when some knucklehead runs over them.”

The next area of focus, Head said, should be the areas of the neutral grounds where the grass cannot be maintained because of all the people who spend all day “camping” in them. One option, she said, would be to provide actual outdoor seating areas that anyone can use, instead of the folding chairs and other items dragged into the neutral ground.

“They [areas of the neutral ground] are ‘bald’ because they become areas in the center of a state highway that have become gathering spaces, often with people drinking alcohol. It’s very unsafe. People have been run over because of walking in and out of the highway,” Head said. “They’re using the neutral ground as more like a camping area.”

NOPD Sixth District Commander Ronnie Stevens said his officers regularly speak to people hanging out in the neutral ground, hoping that the appearance of an officer will encourage them to move along, since the law prevents them from taking any action if loiterers are not breaking other laws. Head asked Stevens to check on one couple she is aware of living on an Entergy box on South Claiborne, who moved down from Ohio because New Orleans was such “a nice place to live and drink outside.”

Several properties need increased scrutiny from city agencies, Head said, such as the triangular-roofed building at 2701 South Claiborne that she hopes can become a permanent grocery store, or the blighted abandoned apartment building at 2616 South Claiborne where a dead body was found inside in 2014.

City officials described multi-agency “sweeps” that they regularly conduct. A sweep in early May on South Claiborne netted dozens of violations, and officials plan to return in July, they said. One area of particular scrutiny was tire shops, to make sure they are properly permitted for rubbish disposal. They also cite businesses for litter — which city ordinances say is the property owner’s responsibility even 18 inches into the street.

City Councilwoman LaToya Cantrell asked officials to make sure her office is aware of the list of businesses being targeted for enforcment. In her view, some need more scrutiny, and some need more assistance, she said.

For example, Jazz Daiquiri near Louisiana Avenue was cited for excessive signage, she said, but they are also at one of the locations most heavily affected by the massive SELA project.

On the other hand, Cantrell said she is concerned about several of the gas stations along the corridor that seem to be a magnet for drug dealing and other unsavory activities. The state Alcohol Beverage Control board should also be included in those sweeps, she said. She is particularly concerned about a gas stations on General Taylor Street and near Toledano, including one where Tulane graduate Thomas Rolfes was last seen purchasing bottled water shortly before being shot to death earlier this month.

Likewise, Cantrell asked for more attention to litter around the Family Dollar — not only on South Claiborne, but also around the city.

“They all look the same, like trash,” Cantrell said. “I think when we’re looking at Claiborne Avenue, that should be front and center.”

Noting that she lives just a few blocks off South Claiborne, Cantrell listed a number of other specific properties that she said need city attention. The street’s condition is personal to her, she said, but also crucial to thousands of New Orleanians who travel it every day, and emblematic of the needs of the city as whole.

“It’s very close to my heart in many ways, being 77,000 vehicles pass Claiborne Avenue every day,” Cantrell said. “It’s ripe for business and industry, but I think focusing on those quality of life issues will help us advance Claiborne. Owners do not want to invest in areas that they feel are not safe, particularly where there’s been crime and ongoing drug trafficking.”