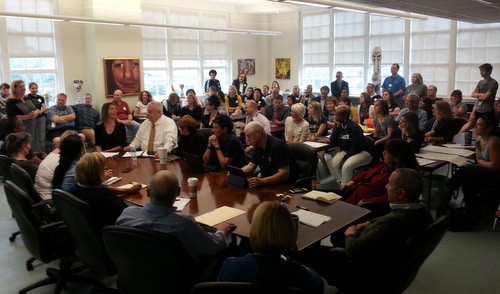 The Lusher Charter School board was surrounded by teachers and others to hear about the union issue on April 16. A similar crowd filled the board’s meeting room on Saturday, May 21. (UptownMessenger.com file photo by Robert Morris)

The division that Lusher board members described leading up to this week’s vote on a teacher’s union exploded into public view on Saturday afternoon in a series of heated exchanges about the school’s diversity, its contract with Tulane University, its mounting legal costs and, of course, teacher morale.

The depth of the disagreements within the board were evident from the meeting’s first moments, when board member Chunlin Leonhard questioned the minutes from the April 28 meeting in which the board adopted its resolution of neutrality regarding the teacher’s union election. The board approved the minutes 7-2 over the objections of Leonhard and board chair Blaine LeCesne, setting the stage for the weightier discussions that followed.

The budget
During the budget presentation, LeCesne questioned the line item for $150,000 in legal costs. Chief Financial Officer Lynden Swayze said she estimated that amount based on the pending lawsuit against the Orleans Parish School Board over the new school-funding formula, plus the amount needed for the union process.

The funding-formula lawsuit is expected to cost around $80,000, LeCesne said. Attorney Mag Bickford says she needs to submit a bill of $103,000 for the work on the union so far, and if the school engages in collective bargaining with the teachers’ aides (who voted 8-5 in favor of a union, but with three additional challenged ballots that could sway the vote), that process cost $150,000 at Benjamin Franklin High School.

With those legal costs already far higher than expected, LeCesne said the board has a financial responsibility not to be so litigious moving forward on the union issue, specifically, by attempting a legal challenge against the teachers’ aides’ union. To that, several board members quickly responded:

With that, the board approved Swayze’s preliminary budget. Swayze noted that it has been particularly difficult for her to craft a budget without knowing exactly how much money Lusher will be allocated under the new state funding formula.

The Tulane contract
Next, board members Ann Salzer and Alysia Loshbaugh presented the five-year contract with Tulane University, up for renewal by June 30. The agreement was crafted immediately after Hurricane Katrina, when Tulane gave Lusher $1.6 million to reopen its doors. In exchange, Lusher offered to reserve seats for children of Tulane affiliates, Tulane gives free tuition to Lusher students taking college classes, and a number of other benefits are exchanged as well.

The five-year agreement was last renewed in 2011, and LeCesne said that while he understands its value at inception, he wanted to discuss its relevance now — specifically, the number of seats reserved for Tulane affiliates — since the university is no longer providing money to the school.

In the last five years, Loshbaugh said, the highest number of Tulane-affiliated students accepted in kindergarten was 24 (out of an incoming class of 100), and the highest for students filling vacancies in grades 1-12 was 27 — roughly two per grade level. The only substantive change in this contract from that of 2011, she said, is the removal of references to an admissions district, since the school has eliminated that.

According to the agreement, half of the open seats are reserved for Tulane affiliates, providing the opportunity for more Tulane affiliates to receive preferential seats now that the district no longer exists. LeCesne said he was worried about the effect that the agreement will have on the decreasing diversity of Lusher’s student body, again provoking a variety of reaction from the board members.

The board then voted 7-2 to accept the contract, with LeCesne and Leonhard saying they objected to the lack of opportunity to review it.

The new board member
Midway through the meeting brought the sole moment of fragile consensus. To replace board member Andrea Armstrong, who resigned amid the discord over the union issue, Cortizas nominated Quentin L. Messer Jr., CEO of the New Orleans Business Alliance.

“I totally trust his character,” Cortizas said. “I know his work. I know his passion about New Orleans and economic development, and I just thought he’d be a good fit for the board.”

Wisdom said she met Messer when he made the rounds of the business community and was very impressed.

“This guy is dynamite,” Wisdom said. “I’m thrilled that he wants to be on this board.”

LeCesne said there was no question about Messer’s credentials, but that the board had always personally met with and vetted new members in the past, so he’d like the chance to do so with Messer as well. Though LeCesne’s description of that process in the past was questioned by Barron, Cortizas said he would be happy to set up such a meeting.

“This is exactly the kind of person we need on the board,” LeCesne said. “This is just about, let’s do our due diligence to make sure we have some contact with him.”

While the cost of the legal fights and the Tulane contract may have exposed the divisions within the board, a discussion of staff morale cut to the heart of it. LeCesne had placed an item on the agenda for discussion of teacher satisfaction and retention in the wake of the union vote, in which roughly 41 percent of 132 Lusher teachers unsuccessfully voted in favor of collective bargaining.

“Unions don’t just spring up without fertile ground for teachers and employees feeling the need to have their voices heard in an organized fashion,” LeCesne said. “I think we’re doing ourselves a disservice by pretending there aren’t any issues.”

To that, Wisdom objected sharply, saying that most of the pro-union teachers professed their love for working at Lusher during the meetings leading up to the vote. Riedlinger read off the single-digit percentages of teachers who depart the school each year, saying many of them leave due to personal or family circumstances, not because of dissatisfaction with the workplace, and that the numbers would be enviable at any school.

“Of course there are concerns,” Riedlinger said. “Of course we are listening.”

Riedlinger also said she had discussed all those terminations with LeCesne — though he objected that those discussions were only her side of the story, not the employees. At that point, attorney Mag Bickford said the conversation had veered into operational matters that the board should leave to the administration, but LeCesne replied that the implementation of a grievance process should be a matter of public policy.

Leonhard said that she had hoped to avoid the divisiveness that the school is now experiencing, and that she wants the board to focus on addressing it. Wisdom replied that while the school needs to come up to a plan to reach out to those teachers who felt the union was necessary, she wants the administration to take the lead on that, not the board.

“I don’t think any one of us is burying our head in the sand,” Huston said. “I still have two kids here, and I want this to be a happy place for them.”

That discussion led into discussion of the executive session that several board members had been calling for, but even that decision proved contentious. Steve Beatty, editor of The Lens, said Bickford had told him that a public-records request by his news outlet would be discussed during the executive session — which Beatty felt was an inappropriate topic to be discussed out of view of the public.

Bickford said the request appeared to be related to the union, so it should be included in the private discussion around collective bargaining. Beatty said it was simply a request for emails between two dates, without any topic mentioned, so he objected to its discussion in secret.

LeCesne said he agreed with Beatty — that the public records requests by those involved in the union should be discussed as part of the collective bargaining strategy, but that those by The Lens did not. Because the board members have personal liability for violations of the state open-meetings law, LeCesne said, he recommended they not discuss that issue behind closed doors.

At that, Wisdom rebuked LeCesne personally. She said everything LeCesne said during the meeting had been contrary to the interest of the school — including his recommendation that the board not follow the advice of its attorney on the open-meetings issue.

“I question your motives, Mr. LeCesne,” Wisdom said. “I am very concerned.”

Although Barron had also said he was “embarrassed” by the conduct of the meeting, the discussion went no further. The executive session lasted a little over an hour, and the board adjourned afterward without further action.