Nearly 60 percent of Lusher Charter School teachers voted against a bid to allow a union to conduct collective bargaining on their behalf in an election Tuesday afternoon, officials said.

The final tally of teachers’ votes was 77-54 against allowing the United Teachers of Lusher to engage in collective bargaining, with one additional ballot challenged, according to Kevin McClue of the National Labor Relations Board.

In a separate vote, a group of teacher’s aides voted 8-5 to engage in collective bargaining, but three additional ballots in that group were challenged, McClue said. 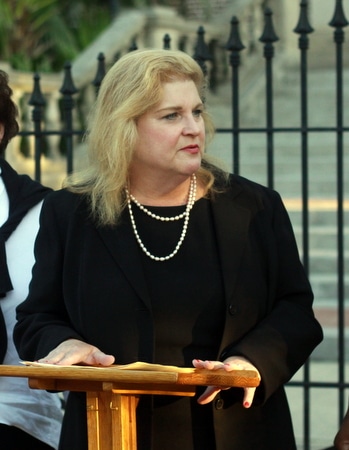 Both the Lusher administration and the teachers said after the vote that it was too soon to know exactly what will happen next. Lusher CEO Kathy Riedlinger issued a statement that did not address the result of the vote, but pledged to continue focusing on the school’s 1,700 students and providing a strong workplace.

“Lusher’s dedicated employee’s continued passion about the future of Lusher Charter School and its community is gratifying and appreciated,” said attorney Mag Bickford, who has represented the school leadership in the union process. “As counsel, we will confering with our client to determine the next steps in this process.”

Organizers of the United Teachers of Lusher spoke briefly after the vote to thank the National Labor Relations Board for conducting the vote, and pledged to continue working with the school on the issues raised in the union process. They declined to discuss whether they planned to challenge the results, saying it was too soon to decide.

“The United Teachers of Lusher is intent on moving forward with the dialogues that have begun through this process so that we can improve the transparency and the security for everyone at Lusher, which in turn allows us to work harder for our students and the Lusher community,” said drama teacher Terry Marek. “We’ve all been through an extraordinary day. … After we’ve had time to sleep and regroup, we’d be happy to answer more questions at that time.”

One of the teachers on the union’s organizing committee, high school English teacher Larisa Gray, said after the vote that she has accepted a job at another school, Einstein Charter. The vote result came as a surprise, however, given the 80 signatures that union organizers gathered in support of a petition seeking voluntary recognition.

“We were fairly certain we had a much higher count,” Gray said. 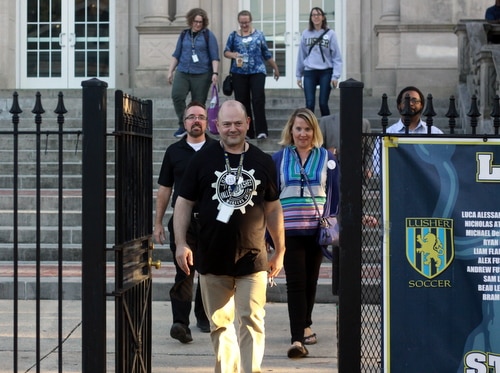 Members of the United Teachers of Lusher exit the building following Tuesday’s vote on the union issue. (Robert Morris, UptownMessenger.com)

The Lusher administration refused to allow reporters to observe the tally of the vote on the union election happening at the school, despite federal labor officials’ guidance that such elections are open to the press.

“No reporters or cameras will be allowed inside the school building as long as the vote is underway or as long as votes are being counted,” according to a statement Tuesday afternoon from the Brylski Company on Lusher’s behalf. “Coverage will be allowed from areas outside the campus gates. The school administration does not intend to make any spokespersons available for comment at any time today.”

The decision appears to have been made unilaterally by the Lusher administration. Brylski’s firm referred questions about the decision to Bickford, but Bickford refused to answer those questions, saying that her firm does not comment on “pending litigation,” and that the election is a form of litigation.

“I’m not commenting one way or the other,” Bickford said when asked why the school did not want reporters present for the vote count.

The National Labor Relations Board’s manual states that the vote count may be attended by the media, as long as the owner of the building gives permission. Kathleen McKinney, the regional director of the NLRB office in New Orleans, said she stands by the policy in the manual, but that the NLRB has no objection to the media being present at vote counts.

“As far as we are concerned, they are open to the public,” McKinney said. “The press would be welcome.”

“We certainly believe it’s an open process, and we believe it should stay open,” Carter said. “We’re not sure why they’re taking that position.”

Lusher’s board president, Blaine LeCesne, said he was unaware the school administration had decided not to allow reporters, and disagreed with the decision.

“This is a matter of public interest. It’s inappropriate for them to try to keep you out,” LeCesne said. “It’s another example of power that is unchecked and has been abused by the administration, and it’s indicative of why a union is needed at the school. It runs counter to the public scrutiny that all charter schools should be operating under. Exactly what is it that they are afraid that your presence may result in?”

Given the federal guidelines opening the process to the media, taxpayers should expect access to the decision making at a public school, said Scott Sternberg, attorney for the Louisiana Press Association.

“I would think the public, particularly the parents and the citizens that fund the school, have a great interest in monitoring the counting of the ballots in an important election such as this one,” Sternberg said.