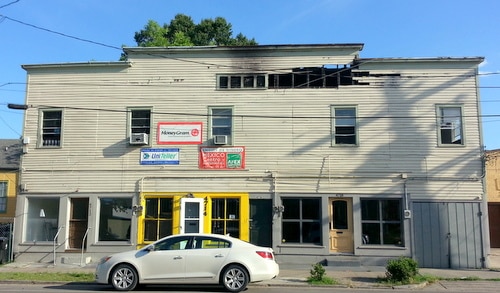 Fire damage can still be seen at the building at 4712 Magazine, now slated for demolition. (Robert Morris, UptownMessenger.com)

A large Magazine Street building heavily damaged in a fire earlier this year has been approved for demolition, but neighbors and City Council members say they intend to remain involved in the rebuilding plans against any large, “big box” style developments in its place.

Meanwhile, a separate request to tear down part of a historic home just off the Freret corridor for a driveway split the City Council and failed amid concerns that the character of the streetscape might be altered for the purposes of an investment property.

‘Suited to the mom and pops’

The building at 4712 Magazine Street caught fire in January after a kitchen fire in an upstairs apartment spread into the attic, damaging the other apartment and the three businesses below.

On Thursday, City Councilwoman LaToya Cantrell said that the owners want to rebuild a similar configuration, with several residential units upstairs and commercial on the ground floor. That plan drew a praise from Councilwoman Stacy Head in theory, but concern about how it will develop in practice.

“My main concern is the preservation of small mom-and-pop spaces,” Head said. “Several bays downstairs and residences upstairs sounds wonderful, but what assurances do we have that it’s not going to be big-box retail?

“I’ve kinda gotten burned in the past, because I’m not as careful as I ought to be making sure these things are tied up with a bow. Developers often, after they leave, kind of forget what they promised,” Head continued. “Just about every new building on Magazine Street is of a formulaic retail, which we have at least articulated our concern about. How can we have the confidence that what will go back will be similar to what is there now, because what is there now is only suited to the mom and pops?”

The motion to allow the demolition includes the legal restraint that the redevelopment plans must be submitted to the Department of Safety and Permits before the demolition can begin, Cantrell explained. In the meantime, she said, she is working with the building owners, architects and neighbors to get a design that is in keeping with the character of Magazine Street.

“The demolition be subject to providing the building plans to Safety and Permits, as aligned with the requirements of the City Planning Commission,” Cantrell said.

Meanwhile, those plans will also have to conform to the Magazine Street overlay, which is one of the “most restrictive” areas in the Comprehensive Zoning Ordinance, said Stephen Kroll of the City Planning Commission. While the planning commission can’t guarantee that the sizes of the sales floors will stay exactly the same, they will require “something consistent with architectural rhythms of the corridor,” he said.

Three neighbors spoke to the demolition along similar lines. They aren’t opposed to the demolition, they said, or to the property’s re-use in a similar mixed manner to what preceded the fire. They simply want to make sure the new project is not so much larger or more invasive that it harms their quality of life.

“It is a high stakes project for many people in a tight residential community,” said Andrea Neighbors of Valence Street.

The assurances by Cantrell and the City Planning staff assuaged Head’s concerns — “That’s given me more confidence that we will end up with a good product,” she said. Cantrell’s motion to allow the demolition passed unanimously.

‘Not a suburban city’ 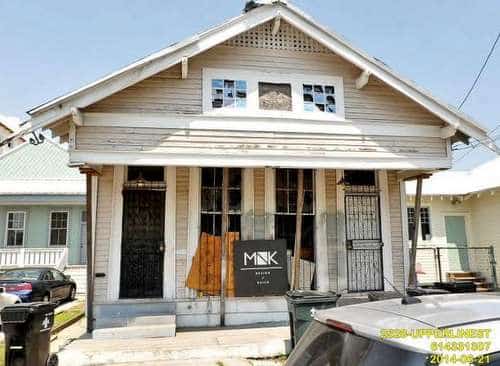 In a separate demolition request, however, the Council narrowly rejected a request to demolish one of the four bays at 2528 Upperline Street to allow the addition of a second floor and a driveway. Cantrell introduced the request by noting the pattern of off-street parking in the surrounding neighborhood, as well as letters of support from immediate neighbors.

“If this was new construction, they would be required to allow for off-street parking,” Cantrell said.

The request was met with immediate disagreement from Councilwoman Susan Guidry, who said the specific design of the house contributes to the neighborhood. Destroying historic buildings for off-street parking sets a bad precedent, she said.

“Many houses do not have off-street parking as a result of being developed prior to the automobile,” Guidry said. “We are not a suburban city for the most part, and off-street parking is not a right. … It tears at me that we would allow something like this.”

Guidry’s point was echoed by Erin Holmes of the Preservation Resource Center.

“We think the partial demolition of this property would forever alter the historic character of a classic Craftsman double shotgun,” Holmes said. “Alteration for convenience’s sake and resale value are not necessary for a successful renovation.”

The owner, Scott Taranto, said the demolition would only remove a quarter of the front facade, and said that the parking would be for him and his wife, who are considering moving to the house from their home on the Westbank.

“With restaurants and bars very popular just five doors away, it would be very difficult to park in the evening time,” Taranto said, referring to the Freret corridor. “My wife won’t move unless we have a driveway. She doesn’t want to have to park on the street with the kids.”

Councilman Jason Williams both pressed Taranto on that last point, saying it was important to him to know whether the variance would be allowed for the owner, or simply to increase its position on the market. Taranto said it was his plan for “right now,” and Head criticized that as a “politician’s answer.”

While she praised Taranto personally for his “wonderful work” on other projects, Head said that allowing this kind of alteration would not only damage the historic character of the neighborhood, but also dramatically contribute to rising home prices.

“Every developer and property owner will now buy in this neighborhood of cottages with the expectation that they will be allowed to cannibalize doubles, add square footage, and thereby increase profits,” If the rules were enforced, this would remain a neighborhood of small singles and doubles, many of which don’t have off street parking and thus, cannot command a premium, and the prices would be stable.”

Williams concurred with Guidry and Head that the demolition could set an unfortunate precedent.

“We wind up with a bunch of houses that don’t look like New Orleans houses,” Williams said.

The Council voted 3-3 on Cantrell’s motion to allow the demolition, killing it for lack of a majority.