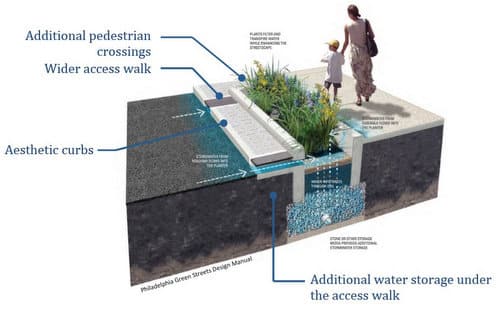 A diagram demonstrating the parts of a bioswale included in a presentation by city officials.

If all goes as planned, the Lower Garden District will soon get a 600-foot-long bioswale along Coliseum Square Park, thanks to money pledged by the Sewerage and Water Board to give the city more green infrastructure.

The bioswale being designed and engineered by Gaea Consultants, LLC, is a drainage course or trench planted with local vegetation that filters and stores rainwater. According to designers, it can aid storm water management by slowing how quickly rain gets flushed into the city’s drainage system.

In the Coliseum Square neighborhood, the project is designed to ameliorate an area that floods every time there’s heavy rainfall.

During a presentation at a neighborhood meeting held Monday night, project engineer Kyle Galloway drove the point home by showing photographs of almost-flooded cars sitting in muddy water alongside the park.

“Right now, any kind of significant rainfall there results in standing water in gutters on Coliseum Street. And dirt and mud collect,” Galloway told Coliseum Square residents. “It exacerbates the problem and it’s just not very attractive. That’s what we’re up against.”

As Galloway pitched it, the project wouldn’t just ameliorate the flooding. The potential bioswale, he said, would also reduce the city’s subsidence rate and calm traffic along the street.

Additionally, he said it would add about 1,500 feet of green space to the area, which would be filled with native plantings like Louisiana irises and palmettos. The idea behind the design is to maintain the historic character of Coliseum Square Park, and possibly even become a model for how the Sewerage and Water Board and the Department of Public Works could replicate similar projects throughout the historic city.

“We view it as a functional amenity, so it should add to the beatification of the street,” Galloway said.

As it’s planned right now, the Coliseum Square Bioswale would be about 8 feet wide, reducing the traffic lane from 25 feet to 17. It would also filter and relocate almost 3,000 cubic feet of storm water, by storing it in the ground underneath the native plants, and below pedestrian crossings.

According to Brad Klamer, a city planner with the Sewerage and Water Board, this is the latest of several projects the board has taken on in order to improve green infrastructure, thanks to more than $2.5 million in grants it’s received for that purpose.

The grants ultimately come as a way to buy time for compliance with a federal consent decree, mandated so the board would fix leaking sewage pipes.

But the city is also trying, Klamer said, to solve a math problem of sorts. Currently, the city’s pumps can handle one inch of rain an hour. Every hour after that, they can handle only half an inch.

When it rains more than that, the city sees back flooding, and the water starts coming out of catch basins and into the streets.

That’s where green infrastructure comes in. If done well, Klamer said, projects like green roofs, rain gardens and bioswales can reduce flooding, all while improving water quality and reducing the city’s subsidence.

So far this year, the board has dedicated more than $300,000 for a 10,000-square-foot green roof on their building in the Warehouse District, which covered the building with dirt and grass in an attempt to limit the amount of rainwater that bounces off the building and into the city’s drainage system in the streets below.

On Monday, however, not all meeting attendants were thrilled about the latest green infrastructure project planned for their neighborhood.

The proposal elicited heated comments during several meetings, with residents complaining about maintenance and potential for mosquito breeding. (Officials said the project is designed to filter the water away well before the 72 hours that mosquitos need to breed.) They also wondered if bioswales were the most efficient way to solve a problem that some say could be fixed by just improving the drains.

Some were concerned with how the project would look in a neighborhood known for historic preservation, with streets exactly as wide as they’ve been for the last 200 years.

“Does it really belong in an historic district?” asked neighbor Fred Diegel. “On a premiere street with premiere homes on a 107-year-old park, especially when you’re doing it for the first time?”

Others countered those opinions, saying the project could not just add to the beauty of the neighborhood, if done properly, but that it was absolutely a necessity.

Among the project’s supporters was Ramiro Diaz, an architectural designer and planner who works with Waggoner and Ball Architects.

Diaz is one of the authors of the Greater New Orleans Urban Water Plan, a study on how to manage water resources of St. Bernard and the East Banks of Jefferson and Orleans Parishes.

“We now don’t have enough space in the landscape to store water,” Diaz said, adding that the land near Coliseum Square Park was “underutilized” for projects like these. “We’ve over-paved our city.”

The plan is slated to be finished for August 2017, and construction could start as early as this fall, Galloway said. 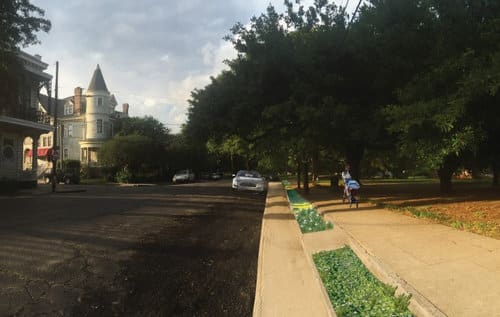 A rendering of the biowale proposed for the Coliseum Street side of Coliseum Square. (via Evans + Lighter Landscape Architecture)