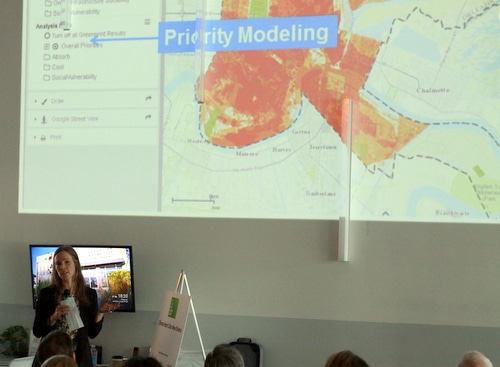 A new mapping tool that collects and visualizes environmental data down to the neighborhood-, street- and property-level will help New Orleans improve the planning of its “green infrastructure” — to cool the city off, manage stormwater runoff, increase bicycle transportation and even protect against storm surge, officials said.

On Monday night at the Propeller entrepreneurship incubator, the national Trust for Public Land unveiled the tools it has developed for New Orleans through its Climate-Smart Cities initiative. New Orleans is now one of more than a dozen cities in the program, and in each, the Trust for Public Land is seeking to fight climate change by focusing on four target activities:

Each of the maps that the Trust has developed for the city collects all the data relevant to each of those activities, explained Chris David, a manager of the climate GIS program. For example, temperature data shows where heat accumulates into “islands” around the city, FEMA maps identify areas prone to flooding, traffic-crash data can help improve bicycle corridors, and storm-surge or sea-level data can help identify other vulnerabilities.

The trust is also particularly concerned with access to public parks, David said.

“We want everyone to be within a 10-minute walk to a park,” David said. “That map exists, and it’s updated every year.”

With the maps in hand, the Trust for Public Land can help cities like New Orleans design projects specific to their environments. For example, in New York City, the program has focused on redesigning urban school yards — long associated with large swaths of concrete — into greener play areas, with fields that can help collect and drain rainwater and environmental demonstration projects to educate the children. In Los Angeles, the trust has begun converting the sprawling city’s vast network of paved alleyways into “green alleys” with permeable paving that collect some of the drought-prone region’s scarce rainwater for reuse while giving children safer places to play.

In New Orleans, like in many cities, one potential use of the data will be targeting neighborhood heat islands for tree plantings. The heat islands, said Shaun O’Rourke, unsurprising mirror gaps in the city’s tree canopy, which likewise are concentrated in less affluent neighborhoods.

The team is still building and expanding the maps to suit New Orleans’ needs. For example, one questioner asked if they have a map that shows subsidence — the sinking of the earth which is increasingly attributed to loss of water in the soil. The presenters said they don’t have such a map yet, but if they can find a data source for it, that tool can easily be added.

The city has chosen the Gentilly neighborhood as the first demonstration area for its environmental projects, said David Lessinger of the New Orleans Redevelopment Authority. Once the city can show the cost benefit of reducing stormwater and lowering temperatures, Lessinger said, Gentilly will become a model for the rest of the city to replicate.

“We want to be at the forefront of how do you actually finance these projects,” Lessinger said.

As the tools are being developed, they are initially available only to city officials, organizers from the Trust for Public Land. But recognizing that neighborhood activists and associations can also play an important role in developing similar projects, they said they are open to ways of expanding access to the tool in the future.

See below for live coverage of the event.