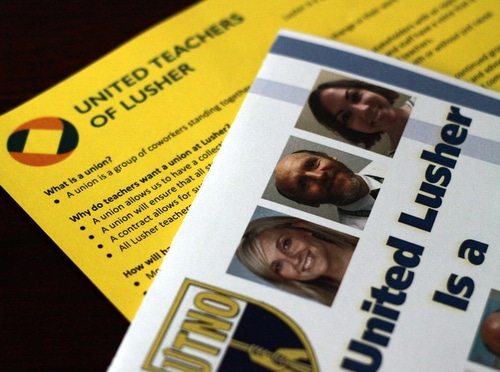 Informational pamphlets passed out by members of the United Teachers of Lusher union on Tuesday night at a meeting with parents. (Robert Morris, UptownMessenger.com)

A meeting called by Lusher teachers on Tuesday evening to explain why they see a need to organize a union turned into the first public airing of sharply conflicting views over the issue. Some parents voiced support for the teachers’ right to make the decision themselves, others expressed concern for what the change will mean for the culture of the school, and the conversation dovetailed with national debates about the role of organized labor in public education and the past and future of the New Orleans school system.

Several of the teachers — particularly those at the high school — said that they began discussing the possibility of forming a union a year ago. After eight or nine years of working together, they said, they felt that they shared concerns that they could better address if they were organized.

“We’re starting to realize we have these things in common we would like to see better at Lusher, because we all love Lusher,” said Terry Marek, who teaches stagecraft in the school’s theatre program. “Collectively, we wanted to see how we could make this better for all of us.”

They reached out to the United Teachers of New Orleans for legal advice on how to go about organizing, then quietly began talking to their colleagues, they said. The secrecy was necessary, they said, because some worried they could be fired for attempting to organize, and other teachers worried they would be punished for even associating with the effort.

“To be honest, we had to work quietly and discretely,” said Sara Slaughter, who teaches creative writing. “If we didn’t, we could risk retaliatory action by the administration. We didn’t have protection for our efforts until the petition dropped.”

Almost as soon as the teachers offered those introductions, questions from the audience began. Many parents said they weren’t necessarily opposed to the union, but were concerned about the process that led to its creation — that some teachers who signed the petition may have been told they were expressing support for their colleagues or interest in learning more about the union, but not necessarily casting a vote to establish one.

“If I hadn’t gotten a call from teachers upset about it, I wouldn’t be here,” said parent Richard Exnicios. “We’re trying to protect the teachers who came to us in tears because they didn’t know what was going on, or they felt intimidated.”

Creative writing teacher Brad Richard said that every page of the petition that has teachers’ signatures on it includes direct statements that the teachers were authorizing the United Teachers of New Orleans to be their “exclusive representative” for collective bargaining. No teachers could have been misled about what they were signing, and none have asked to be removed, Marek and Richard said.

The teachers who organized the union said that there were some of their colleagues so close to the administration that they were not contacted out of fear that the effort would be exposed, and that teachers who said they had no interest initially were not asked about it again out of respect for their position. But the petition does represent a majority of the teachers at Lusher, they said.

In one emotional moment, a teacher (who declined to give her name for publication) asked her colleagues why she was never told of the union organizing. Second-grade teacher Geraldine Boesch replied to her that the organizing effort at the Willow Street elementary school happened more quickly and was more difficult.

Kathy Haab, a parent who had spoken tearfully about her lack of information on the issue at Saturday’s meeting of the Lusher governing board, said she remains undecided on the issue. She said she loves the teachers and the administration and knows they all love the school, and asked the teachers to assure her that their concerns were not acted upon by the supervisors.

“We all have specifics that we’ve addressed with the administration to no avail for years,” Marek replied.

The frustration mentioned most often by teachers was their lack of a long-term contract, which they described as a traditional feature of American public education. That point drew specific opposition from some parents — one called it a “gutting of accountability,” and another called out that “unions protect mediocrity.”

“I want the best performing teachers teaching my children, not protected teachers who can perform any way they want,” said another man in the audience.

The teachers said that the union contract will actually spell out expectations and disciplinary processes, unlike the vague way job renewals are currently handled. Such a contract, they said, will actually attract better teachers to Lusher, who appreciate the job security.

“I really like the idea of having the teachers under contract. I want to be able to count on these teachers being there for my kids,” said parent Marty Cavendish, saying she believes the charter system has given high-performing teachers more mobility and job options. “I really hope we get you under contract, because I want you guys to be here at least until my child graduates.”

The teachers said they still did not feel the time was right to come forward with the other issues that concern them about the school. The most pressing question, they said, is whether they can negotiate for a contract now that will give them confidence to raise their concerns more directly without the risk of retaliation.

“If I had that contract, I felt like it was safe enough for me to disagree,” Boesch said.

Jennifer Volner, a member of the school’s parent-teacher organization, said didn’t necessarily oppose the union, but she was upset not to know of those concerns sooner so she could have helped advocated for the changes.

“As a member of the PTSA, I would have liked to have heard this a long time ago, rather than just be hit with it,” Volner said. “I feel like what has happened is, there’s a huge divide. You’ve got teachers that are not happy on both sides. You’ve got parents that are glaring at each other. I’m so sad that it has come in the manner that it has.”

Other parents, however, countered that the parents really shouldn’t have a role in what is a conversation between employees and their employer. Further, teachers who oppose the union simply won’t be governed by it, they said.

“My role as a parent is very limited. My job is to support the teachers,” said Michelle Beaty. “The teachers are professionals. I think we’re teaking a very paternalistic attitude toward them.”

Lusher is the third charter school in New Orleans to organize a teachers’ union — after Benjamin Franklin High School and Morris Jeff Community School — following the transition to the charter system after Hurricane Katrina. The role of unions in public education has been hotly debated, and Tuesday’s meeting, like Saturday’s, drew 100 parents, teachers and even outside activists observing the debate — large crowds for a school meeting, though only a fraction of the community immediately around Lusher’s 1,700 students.

The school’s governing board will next decide whether to recognize the petition and begin bargaining with the union, or reject it, triggering an election process governed by the National Labor Relations Board. Jerome White, a Calculus teacher at the high school, acknowledged the uncertainty, but promised the parents that little would change in the classroom as a result.

“We’re going to keep being the teachers we have been for your children,” White said.