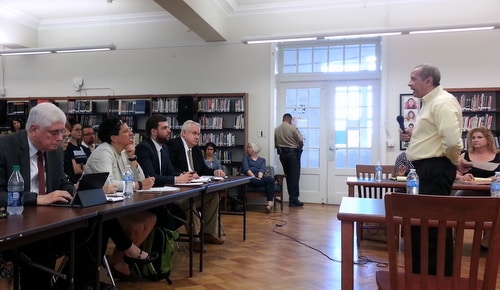 The Lusher Charter School governing board voted 6-5 on Saturday morning against recognizing a petition for collective bargaining by the newly-formed United Teachers of Lusher, likely triggering a schoolwide election on the question in the coming weeks.

‘Contested campaign’
The meeting began with a motion in favor of recognizing the union by board member Chunlin Leonhard, supported by board chair Blaine LeCesne. Leonhard said the tension leading up to Saturday’s meeting amounted to skirmishes in what would emerge into a full-fledged war within the school if the board rejected the petition and sent the issue to a vote.

“Let’s avoid such a nasty fight,” Leonhard said. “A contested campaign is going to result in many people wounded emotionally and morally, and that’s a heavy price to pay.”

LeCesne said that rejecting the teachers’ petition for the union will harm the school’s ability to recruit teachers, especially after similar requests were adopted so easily by the boards of Benjamin Franklin High School.

“An election contest will feed into that unhealthy image,” LeCesne said. “We’re going to lose that public image battle.”

Board members Paul Barron, Rachel Wisdom and Kiki Huston spoke against recognizing the union. Wisdom said the union could have given the board more time to study the issue if they had wanted, instead of forcing a decision so soon, and she has questions about the actual names on the petition.

“You guys have less than half,” Wisdom said. “I don’t see how anyone under those circumstances could vote to voluntarily recognize this union.”

The margins of teachers in support of a union were so much higher at Ben Franklin and Morris Jeff, Barron said, that he would have easily have supported their petitions. But the latest figures suggest about 60 percent of the faculty had signed the Lusher petition, and with some of the signatures in question, Barron said he was left unsure of the breadth of support for it.

“If I knew that a majority of teachers want a union, I’d vote for that today,” Barron said.

‘Major decisions’
After framing the discussion, the board then opened the floor to about three hours of comments from nearly 60 people who signed up to speak on both sides of the issue, among the many packed into the recently renovated high school library.

Teacher Gigi Boesch said that the school is already governed by strong entities — the parent-teacher organization, the board, and the administration — and the teachers want to be as strongly represented in decision making. The quality of the school will not suffer after the union is formed, said teacher Jerome White; instead, it will continue to improve.

“The claim that we are trying to form a union to protect bad teachers, it’s offensive,” White said.

Kindergarten teacher Erin Louviere said she loves her colleagues, but was left out of the discussions about forming the union. Now that she’s reviewed the Franklin contract, she has issues with it, she said.

“I was not initially approached or asked before this petition was turned into the board,” Louviere said. “I do not make major decisions in a short amount of time, especially when children are involved. … Please let us have a vote.”

Parents also fell on both sides of the issue. Erica Zucker, a labor lawyer, said that rejecting the petition would disrespect the teachers’ ability to decide what’s best for them. The election will be difficult, she said, and if the union prevails, the board will have to negotiate with them but with a loss of good faith that would have come from voluntary recognition.

“I’ve never seen a contested election that doesn’t include accusations back and forth,” Zucker says.

Parent Chris Reade criticized those who said the union should be recognized to avoid confict.

“It’s a cowardly and shameful argument, Neville Chamberlain on steroids,” he said.

‘If this is the beginning…’
Ultimately, six members of the board voted against recognizing the union — Richard Cortizas, Alysia Kravitz Loshbaugh, Ann Salzer, Barron, Wisdom and Huston. Cortizas said he also has questions about the actual count of teachers on the petition, and that he didn’t believe the election would divide the school community any more than it already is.

“It’s already gotten there, and I can’t believe it would get any worse than that,” Cortizas said.

Joining Leonhard and LeCesne in favor of recognizing the union were Andrew Armstrong, Carol Whelan and Reuben Teague. Armstrong said that the bulk of the objections to the union seem to be about the process of forming it — not what it actually represents — and she is concerned about the effect on the school of forcing a vote.

“If these two weeks have been brutal, the next three weeks — I’m not sure what would happen,” Armstrong said. “If this is the beginning, it’s only going to get that much harder.”

After the vote, LeCesne said the board need to hold a closed-door executive session with their attorney for legal advice regarding the collective bargaining issue. Steve Beatty of The Lens objected to closing the meeting on the grounds that since the board voted against the petition, there is no entity with which to enter collective bargaining. Robert Morris of Uptown Messenger also objected, saying that any general advice about how the process will move forward should be offered in public, as the Orleans Parish School Board often does.

The board voted to enter the executive session and met behind closed doors for about an hour. At 2 p.m., they adjourned, saying no further action would be taken.