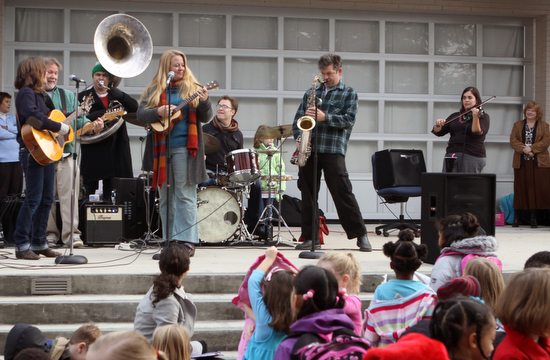 I am writing to support Lusher teachers, and I want to share my thoughts as a labor historian, a teacher, a former union member, and a parent of two children at Lusher.

Many friends and fellow parents have said they are normally pro-union or progressive, but that teachers, and particularly Lusher teachers, do not need a union.  This is for Lusher teachers to decide themselves.  Parents can support or not support unionization efforts (clearly, I am also taking a side), but ultimately this is a decision for the teachers to make.

There has been a great deal of misinformation about unions and criticism of teachers since Lusher teachers announced United Teachers of Lusher.  Lusher teachers are professionals, and dedicated to our children.  A union will not affect parents’ ability to interact with teachers or administrators.  It would provide teachers the ability to negotiate their salaries, work schedules, and workloads in a consistent and transparent way.  Morris Jeff and Ben Franklin have recently recognized teachers’ unions, and there has been no outcry from parents about changes in school culture or community.  I see no reason why there should be such concern at Lusher.

I have also heard sentiments that somehow a union is not part of Lusher’s “culture.” As a parent, I have listened to Lusher’s Project Pride rules every day for four years, and teachers communicating as a group with administration is an obvious extension of that culture.  At Lusher, we teach our children to speak up for themselves and work together as a group.  That is what a union does.  In this way organizing collectively falls under “being responsible” for our community and our teachers.

It is also important for teachers to be able to make this decision without fear or intimidation from administrators.  Choosing to unionize is not a sign of dissatisfaction with one’s job or disrespect for one’s employer.  Administrators (and parents) should not take it as a sign of betrayal or disgruntlement, but rather a sign of empowerment and pride in their faculty.

Each year since my girls have started Lusher, the lower school principal has spoken at morning meeting during Heart and Soul week about how we should look to Dr. Martin Luther King and his inspirational role in American history and emulate him.  It is well-documented that King was a strong and consistent supporter of public employees’ rights to organize.  As a community, respecting our teachers is also respecting their right to organize.

There is also a misconception that the only workers who “need” unions are factory workers.  Today a union member is far more likely to be a nurse, a hotel worker, a post office worker, or a teacher.  I would argue the most visible New Orleans labor leader is Drew Brees, who was a leader in the NFL’s Players Association for more than five years. In short, workers with professional skills and wages (and in Brees’ case the very highest wages) can also see the value of unionization, because it allows them to organize collectively and advocate for the group as a whole.

Historically, teachers unions have had great success at improving wages and benefits for a workforce that is disproportionately female.  In a country and economy which undervalues women’s work, teachers’ unions have been pivotal in creating competitive wage scales, job security, and maternity leave policies, which have improved women’s professional and working conditions.  According to the Bureau of Labor Statistics, non-union workers earn only 79% of what union members make.  This is sadly equivalent to the 79 cents on the dollar that women earn compared to men’s salaries nationally, and in Louisiana this pay discrepancy is even starker. A union contract would quickly improve women’s earning power in New Orleans.

In the news media, there has been consistent targeting of teachers unions for problems in education.  This steady anti-union language seeks to blame teachers’ unions for a much larger societal failure and lack of investment.  While unions are neither perfect, nor a panacea (and as a labor historian, I can point to countless controversies and problems within and between unions), despite constant attacks, unions are not the problem with public education today.

I’m also concerned by language that a teachers’ union would hurt our children’s education.  There has been no evidence presented for this argument, the only evidence I am aware of is rumor and anecdote.  A union will not interfere with classroom instruction. The strongest public school districts in the United States are all unionized, and have been for decades.  A union will also not interfere with Lusher’s activities, events, or social functions. Quite simply, Lusher’s teachers are excellent, and a union would not change that.

Finally, we need to make sure to maintain perspective and recognize our teachers’ professional status.  Unionization is a decision for them to make, and if Lusher teachers want a union and representation by United Teachers of Lusher, as parents and a community, I hope we can stand with them.

Jana Lipman is a parent of children at Lusher Charter School and an associate professor of history at Tulane University.

3 thoughts on “Letter to the editor: Lusher teachers, not parents, should make the union decision”