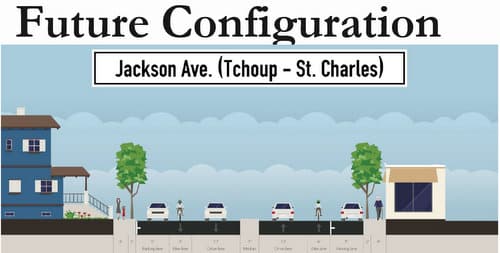 A rendering of the new configuration of Jackson Avenue through the Garden District, after a repaving project scheduled to start later this year. (via city of New Orleans)

As part of an upcoming repaving project on Jackson Avenue, the portion of the street through the Garden District will be reduced from two travel lanes to one and a bike lane added on each side of the road, New Orleans city officials told nearby residents in a meeting Thursday evening.

South Claiborne to Galvez
The first project — scheduled to begin construction April 18 — is a full $2.6 million road reconstruction on the short section between South Claiborne Avenue and South Galvez Street. The entire road will be dug up, new utility and drainage lines will be installed underneath, and the road itself will be rebuilt with new sidewalks running alongside it, officials said.

The two-lane configuration of this section will not change, however, and it is scheduled to be finished later this year. There may be occasional water service interruptions, city officials said, but they will only take place when the new lines are being connected.

South Claiborne to Tchoupitoulas
The second project will repave the entire length of Jackson Avenue from South Claiborne Avenue down to Tchoupitoulas. Contractors are bidding on the project now, and the city hopes to select a company this spring, allowing construction to start in the summer and conclude by the spring of 2017.

The scope of the repaving project is much more limited, as workers will scrape off the top three inches from Jackson Avenue and replace them with fresh asphalt. One water line will be replaced, between Clara and Willow streets, officials said.

But when the section of Jackson Avenue from St. Charles Avenue to Tchoupitoulas is rebuilt, its configuration will be different, officials said. Instead of the current two vehicle lanes and a parking lane in each direction, each side of the neutral ground will have a wider, single lane for vehicles, a 6-foot bicycle lane and a parking lane.

The reason for the change, the officials said, is that Jackson Avenue is a bus route, which requires an 11-foot travel lane. The current lanes are only 10-feet each, but the new vehicle lane will actually be even wider at 13 feet. When complete, Jackson Avenue will resemble the current configuration of Esplanade Avenue, officials said.

“It’s been working well for the city,” Hartley said of the reconfigured Esplanade Avenue. “The traffic flow is very good, and cyclists love it.”

What about the drivers on Esplanade? the residents asked.

The proposed reconfiguration drew mixed reactions from the neighbors St. Thomas Baptist Missionary Church on Thursday evening. The city’s traffic department has studied the proposal, however, and supports it, Hartley said.

“They believe the traffic counts support this configuration,” Hartley said.

Jackson Avenue resident Billy Sothern, however, said he expects the removal of the second vehicle lane to reduce speeding on the wide-open stretch.

“I’m very enthusiastic about the bike lane. I think it will make it safer for my kids,” Sothern said. “I suspect if it’s one lane, there will be less race car action.”

Because the project leads through historic districts, it must be reviewed from a preservation standpoint as well, Hartley noted. For example, all granite curbs will be preserved.

Several residents asked if the neutral ground could be widened, given the extra space freed up by the reduction in lanes. Lou Volz, a former member of the City Planning Commission and past president of the Coliseum Square Association, said the second travel lane was added on that stretch of Jackson Avenue to accommodate the increase in traffic headed to the ferry landing. Since the ferry closed in 2009 (with its landing subsequently placed up for auction), Volz said there had been discussions within the Lower Garden District Renaissance effort of restoring streetcar service to that stretch of Jackson Avenue, and that a wider neutral ground could be a stepping stone in that direction.

“Why spend money on something that may just have to be torn up later?” Volz asked.

Hartley, however, replied that the project budget likely doesn’t include enough money to widen the neutral ground.

Many residents entered the meeting dismayed that the city is planning a significant construction project on yet another major Uptown transportation artery, but officials stressed that a road repaving is nowhere near as disruptive as the installation of major drainage canals on Louisiana, Napoleon and Jefferson avenues. The contract time for the entire Jackson Avenue job is 120 working days, and a travel lane will be kept open at almost all times, they said.

“I don’t really expect it to take that long, depending on the contractor we get,” Hartley said.

When the actual asphalt is being laid, there may be 20 to 30 minute intervals when the street can’t be used on a short section, Hartley said, but those won’t be scheduled during traffic rushes. On-street parking may also be affected for a few hours at a time, but only briefly. On weekends, when workers aren’t present, Jackson Avenue will be completely accessible — though perhaps rough in the patches that have been milled but not yet repaved.

Because the bid hasn’t been awarded, Hartley said the actual sequence of construction hasn’t yet been determined. His best guess, he said, is that it will start at South Claiborne and head toward the river, possibly working on one side first and then coming back up the other.

The city has also built consideration of next year’s Mardi Gras into the contract. Workers will have to cease construction one week prior to the first parade on St. Charles Avenue, and won’t resume until parades are over. As Carnival nears, Hartley said, officials will begin looking for a natural stopping point, ensuring that the project doesn’t interfere with either the parades on St. Charles or the famous Krewe of Zulu route on Jackson itself.

“We will demobilize,” Hartley said.

Other residents asked if water-permeable materials could be used instead of asphalt, but that would require reconstruction of the entire road rather than just a repaving, a much more expensive project, Hartley said. The Department of Public Works is considering some “green” infrastructure projects in the area, however, and there may be structures that can be added along the roadside to help with water management, he said.