A video of a recent auto burglary on Annunciation Street shows how quickly thieves can get in and out of unlocked cars, New Orleans police said this week as they repeat their plea for residents to prevent crime simply by locking their doors.

The burglary occurred in broad daylight Thursday, March 24, in the 3900 block of Annunciation, discovered after the victim got into his vehicle and found the center console open and its contents “strewn about,” according to the report on the case.

NOPD Sixth District Commander Ronnie Stevens said the video is one of many that police collect showing opportunistic thieves practicing what they call “popping,” ambling up and down sidewalks checking car door handles to see if they are unlocked. The videos show the thieves bypassing other vehicles that were locked, because it is so easy to find them unlocked, Stevens said.

“One door handle is unlocked, but one is locked — so that one didn’t get broken into,” Stevens said.

NOPD Sgt. David Barnes also urged residents not to leave their valuables, such as purses, in plain view in their vehicles.

“It’s just an invitation for someone to take it,” Barnes said.

A full 53 percent of the auto burglaries in the Sixth District are attributed to residents leaving their vehicles unlocked, said NOPD Lt. Nick Gernon.

“They could cut down car burglaries by 50 percent if they just locked their doors,” said NOPD Sgt. Daniel Scanlan.

Anyone who can help identify the men in the video is urged to call the NOPD Sixth District station at 658-6060 to speak to a detective, or CrimeStoppers at 822-1111 to leave an anonymous tip that could be eligible for a cash reward. 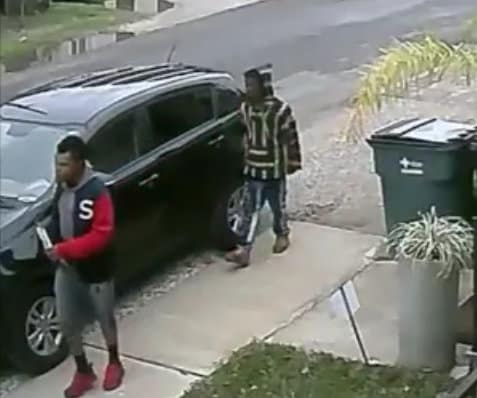 A still image from the video of the March 24 burglary of a vehicle in the 3900 block of Annunciation Street. (via NOPD)