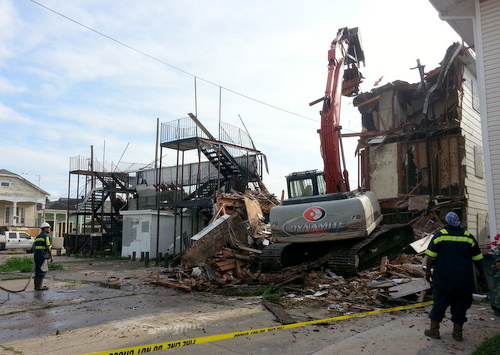 Construction equipment chews through the old structure on the Amelia Street side on April 20, 2015. (Robert Morris, UptownMessenger.com)

After years of complaints from neighbors about its blighted condition and allegations of illegal activity by squatters in the former apartments at 1900 Amelia, the building suddenly collapsed in April 2015. The fate of the site remained uncertain, but the Rev. Charles Southall III of the First Emanuel Baptist Church in Central City has filed an application with the Louisiana Housing Corp. for money to rebuild affordable housing on the site, Cantrell said at a joint meeting Tuesday night of the Delachaise Neighborhood Association and Milan Focus Group at their new location, Martin Wine Cellar.

Technically, the long period of disuse has cost the site its multi-family zoning, Cantrell said, and it has reverted to the same two-family residential classification of the surrounding neighborhood. But with the growing housing affordability crisis in the city, Cantrell said, she will strongly consider allowing the some form of multi-family housing to return there, and urged the neighborhood to begin considering that as well.

“Where multi-family has existed, it has a right to re-exist,” Cantrell said. “It’s something we’re going to have to think through together. These are some of the things we have to think about when you’re talking about multi-family that used to exist in a community that’s now going away.”

The previous building had 10 units, and Cantrell said in response to neighbors’ questions that she doubts she would allow more than that in the new proposal.

“I don’t see increased. I see dealing with what was, versus what it is,” Cantrell said. “Whether it’s going to two, or is it 10, or you can even meet in the middle in there — all I’m saying is, it’s going to be a conversation. As your council person, what I look for, and what I’m very conscious of, is affordability in this city and taking units off the market that used to exist pre-Katrina.”

A neighbor who lives next door to the project asked Cantrell if the new project must be an apartment building, or perhaps if the site could be subdivided to create multiple smaller two-family homes. Cantrell said she would personally find that to be a good solution, but that what happens may be dependent on what kind of money Southall receives.

“I think that sounds good, but I don’t know what’s being proposed just yet,” Cantrell said. “What possible funding streams are coming to bring that parcel back into commerce will have everything to do with what you can do on it.”

Cantrell said she only confirmed the application on Friday, and wanted to give the neighborhood as much time as possible to consider it.

“Affordability matters in this city, and it matters in this neighborhood. We’re in a crisis here,” Cantrell continued. “In this community, looking at the demographics, it’s not about pushing people out. It’s about building balance, and that’s what I’m looking for. But we’ll do it together. That’s why I brought it up.”

The Delachaise Neighborhood Association did not discuss any position to take on the project on Monday night, but thanked Cantrell for her attention to it and for bringing the information.

“We’ve been working on this property for so long,” said association president Dodd Denton. “We’re so glad you’ve taken it on.”

Meanwhile, the association is planning its third annual anti-blight at 9 a.m. Saturday, March 19, with the goal of creating a comprehensive neighborhood survey. Neighbors will gather at Martin Wine Cellar and divide into teams to catalog the remaining blighted properties and build a spreadsheet so that they can contact owners about restoring them and city officials if those efforts are unsuccessful. The rain date is 3 p.m. Sunday, March 20.