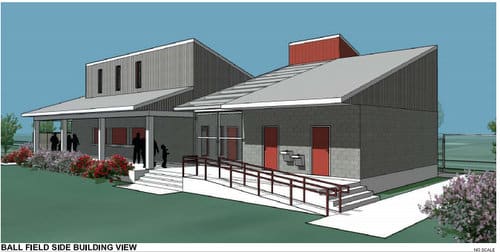 A view from the ballfield of the new concessions building planned for Cuccia-Byrnes plaground. (via City of New Orleans) 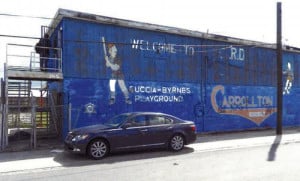 The city of New Orleans approved plans Monday morning for a new concessions building to replace the aging structure at the Cuccia-Byrnes playground, where the Carrollton Boosters operate baseball fields they recently described as vital to their programming.

The new two-story building on Forshey Street — just off South Carrollton Avenue — will include a concessions area, restrooms and upstairs storage space, according to plans filed with the city.

The project will include, according to the plans:

The city had presented the plan to neighbors at a Jan. 14 meeting at the Hollygrove Multipurpose Center, according to records included in the project application. Paul Dimitrios of RCL Architecture explained that the entrance to the new building will be situated on the Forshey Street property line, closer than city regulations would normally permit, to allow the maximum possible space for the ballfields.

“We talked about leaving as much room available as possible on the park side of the building to allow for the regulation size fields needed for soccer and baseball,” Dimitrios wrote afterward. “Everyone seemed to be okay with the solution.”

Residents also had questions about access to the facility, but no one from NORDC was on hand to answer those questions, Dimitrios wrote.

The Board of Zoning Adjustments approved the setback request unanimously. The project received no discussion by the board or city officials presenting it as the waiver was approved.

The condition of the facilities at Cuccia Byrnes drew criticism from City Councilwoman LaToya Cantrell at last month’s committee hearing about the Carrollton Boosters proposed soccer complex on The Fly.

“If you go to Cuccia right now and you walk around it, it is in deplorable condition,” Cantrell said. “It needs to be a priority.

Carrollton Boosters leaders replied that they had also put $45,000 into repairs at Cuccia Byrnes, and that they only paused at the request of the city’s Capital Projects team as the current upgrades were planned.

“It’s vital to us. We need it. We want it to look better,” said David Sumrall. “… We will then do whatever else we need to do to keep that facility up and make it as functional and usable as possible.”

A rendering of the Forshey Street view of the proposed new concessions building at Cuccia Byrnes playground. (via City of New Orleans) 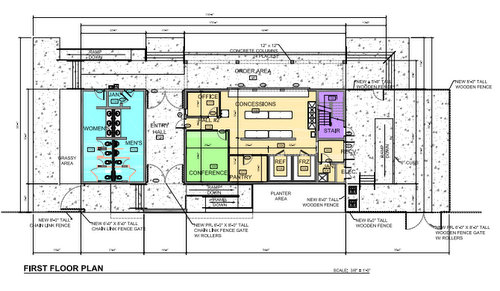 The floor plan for the first floor of the new Cuccia-Byrnes concessions stand. The second floor will be used for attic space and storage, plans show. (via City of New Orleans)