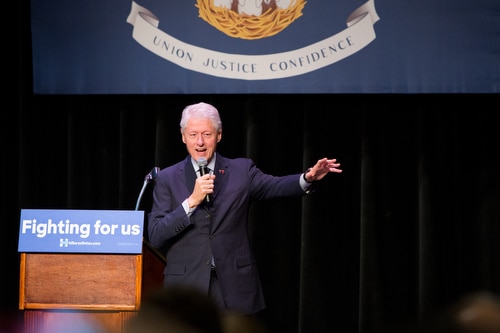 Applying themes from his address on the 10th anniversary of Hurricane Katrina last year to the national stage today, former President Bill Clinton described unity as a prerequisite to prosperity and his wife as the best candidate to fight for both before a crowd of New Orleans supporters in Central City on Friday morning.

“The first thing is, you’ve got to elect a President who sees everybody,” Clinton said. “You can’t fix a problem or redeem a promise for someone you don’t see.”

Bill Clinton’s remarks come on the eve of Saturday’s Presidential primary elections in Louisiana, where former Secretary of State Hillary Clinton is widely expected to continue her sweep of Southern states. He returns to the city less than a year after he gave the keynote speech during the city’s 10th-anniversary commemoration of Hurricane Katrina, when he called for a “new unity” between those who celebrate the city’s rebirth and those who lament its ongoing or even widening injustices.

Several other campaigns have visited Louisiana as well leading up to the primary. Democratic U.S. Sen. Bernie Sanders and Republicans Ohio Gov. John Kasich and businessman Donald Trump have all held rallies just outside the city in recent months; Republican Sen. Ted Cruz was also scheduled to speak on the Northshore on Friday, and Trump planned to be the first candidate to hold a public rally in the city of New Orleans on Friday evening with an event at the Lakefront airport.

The city of New Orleans is a Democratic stronghold, however, and Hillary Clinton enjoys the support of its political power structure. Bill Clinton, for example, was introduced by the city’s most prominent Democrat, Mayor Mitch Landrieu, who began by remarking on the spectacle of Thursday night’s Republican debate.

A joke about the debate, Landrieu said, would start with three men walking into a bar — one a liar, one a fraud, and one a “choke.” But that’s not what Democrats are calling the Republicans, Landrieu said — that’s what they have been calling each other.

“If it wasn’t so sad, it would be funny,” Landrieu says.

“The less I say about that, the better,” Clinton quipped.

On a more somber note, Landrieu also brought with him a group of mothers who have lost children to the city’s well-known plague of violence, and said they have been working on the front lines to create reconciliation — starting with the families of their children’s killers, with the hopes that the bridges they build can begin to heal the entire city. The work of those women became the focal point for Clinton’s address.

In contrast to the Republicans who decry a need to “Make America great again,” President Barack Obama said in his State of the Union address this year that America is now the best it has ever been, with a growing economy, global prominence, and more people with health insurance than ever before. But there is still an anxiety churning in America, where many Americans can’t find themselves in the picture Obama has painted, Clinton said — and Hillary Clinton’s campaign is about giving them places as well.

“The world that the President talked about doesn’t exist in some neighborhoods today,” Clinton said.

In some of the African countries, the standard greeting translates less to hello, and more to “I see you,” Clinton said. But many Americans feel invisible, left behind by the growth in the economy, he said. All the possibilities the country has to offer are irrelevant to people who don’t believe they’ll live to finish their childhood — a belief that can be pervasive in the neighborhoods where New Orleans mothers are losing their children, or in West Virginia where high rates of drug addiction suppress the state economy, Clinton said.

“People are dying of a broken heart out there because they think nobody sees them,” Clinton says.

This worldview of striving to see and recognize one another, Clinton said, stands in stark contrast to the scapegoating of Republicans who say that all these problems “are the Mexicans’ fault,” and that all that’s needed is a wall across the the border.

This concept can be applied to national security, he said, by embracing the vast majority of Muslims who hate violence to help in the war against terror. Income growth has been stagnant, but can be increased by creating new jobs repairing the aging national infrastructure that led to the water crisis in Flint, Mich. More job training will provide the unemployed with the skills they need to take the specialized jobs available but unfilled in America. And reducing the burdens of student debt will help more young people join the economy sooner, Clinton said.

“Turns out, doing a good thing is good economics, because it allows us to grow together,” Clinton said.

Clinton’s address heavily emphasized the differences between his wife and the Republican candidates, and spent very little time on her sole remaining opponent for the Democratic nomination, Sanders. He acknowledged the scale of Sanders’ ideas, but said the country can’t wait on a Democratic Congress to pass them — it needs someone who will begin to fight immediately.

“The most important thing is there’s nobody running who has anything approaching her record as a changemaker,” Clinton said.

‘Time to stand together’
The former President’s appearance drew a standing-room only crowd to the Ashe Power House Theatre. The venue in some ways symbolized his themes of using rebirth to address disparity — barely a year old on a block along the rejuvenated O.C. Haley Boulevard corridor, the Power House is also only about five blocks from Central City’s latest murder scene, the Feb. 28 killing of 28-year-old Dennis Marshall.

His remarks drew high praise from the audience. Deborah Langhoff, an Orleans Parish Democratic party official and superdelegate to the Democratic National Convention who has declared her support for Clinton, said the former President’s address was well suited to New Orleans.

“In New Orleans, it really resonates, that idea of acknowledgement. ‘Good morning,’ ‘good evening’ — that something people here in New Orleans have been thoughtful about for a long time,” Langhoff said. “The important part is conveying how we bridge those gaps, how everyone can progress together.”

The nearby Singleton Charter School brought a group of about 15 eighth graders to hear the former President, and Kortney said ahead of time that she wanted to hear his ideas on education. Afterward, however, it was Clinton’s remarks on improving public safety that resonated most strongly with her.

“He started talking about needing more police, and I think we do,” Eaglin said.

“Because there are so many characters running, a lot of people more interested in the race,” Reip said. “I just hope that when Hillary becomes the nominee, Bernie supporters will still come out to vote for her as well.”

Tilman Hardy, a Carrollton-area community activist and CEO of the Core USA management firm, described himself as a new fan of Sanders, but a longtime supporter of the Clintons. Now, he said, he hopes that the Democratic nomination process will come to an end soon with Hillary Clinton in a position to lead.

“The things she does that I don’t like are strictly around politics,” Hardy said. “I was on the fence for a long time, but I’m tired of being on the fence. It’s time to stand together, and I believe she is the effective leader.”

To read our live coverage of the event, see below. 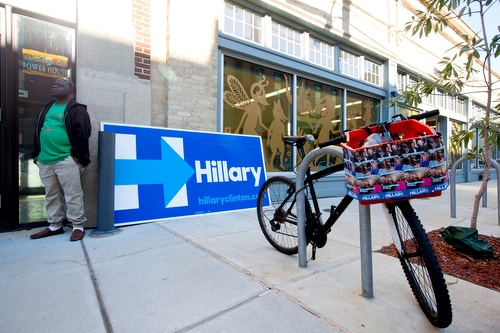 Bobby Henry, from Lower Algiers Cutoff, a volunteer with the Hillary Clinton campaign stands in front of a Hillary Clinton sign he put out Friday morning before seeing former President Bill Clinton speak at Ashe Power House in Central City Friday morning. “I am trying to encourage more American people, people in public housing, to get out and vote,” said Henry. (Sabree Hill, UptownMessenger.com) 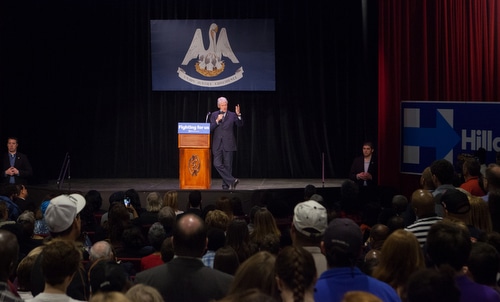 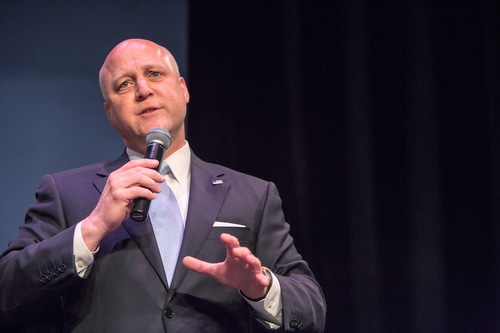 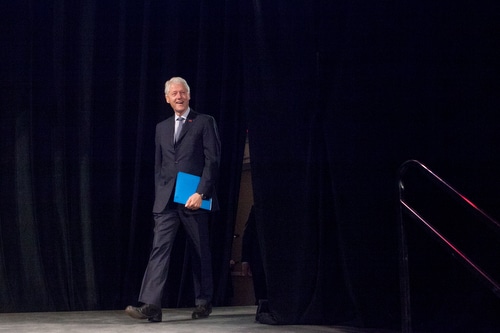 Former President Bill Clinton smiles as he walks out to address attendees at the Ashe Power House in Central City on Friday morning. (Sabree Hill, UptownMessenger.com) 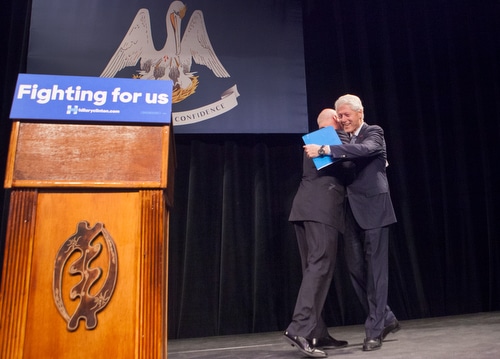 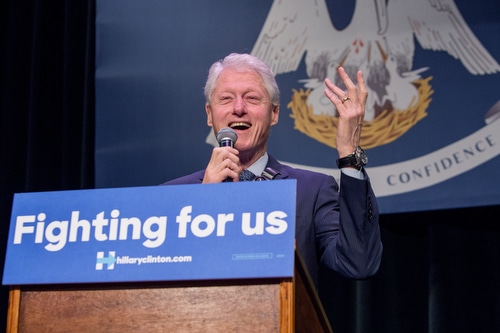 Former President Bill Clinton laughs as he speaks to the crowd at the Ashe Power House in Central City on Friday morning. (Sabree Hill, UptownMessenger.com) 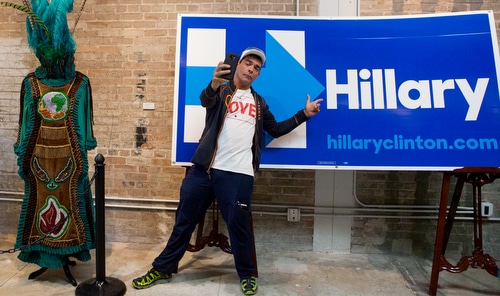 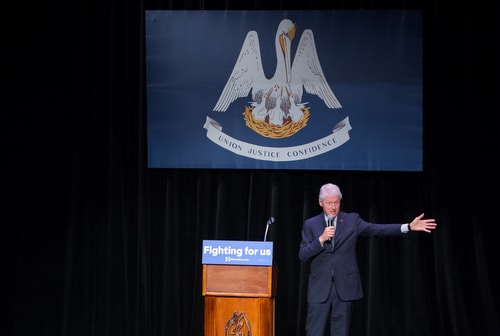 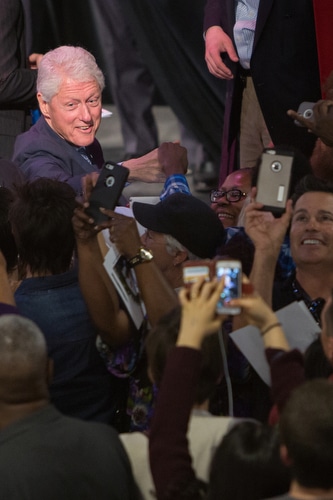 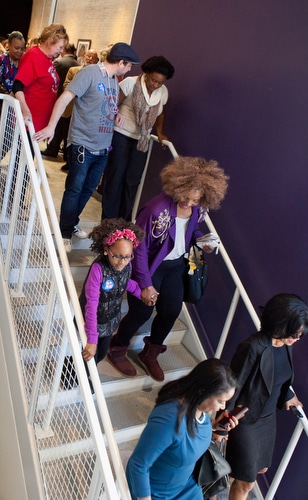 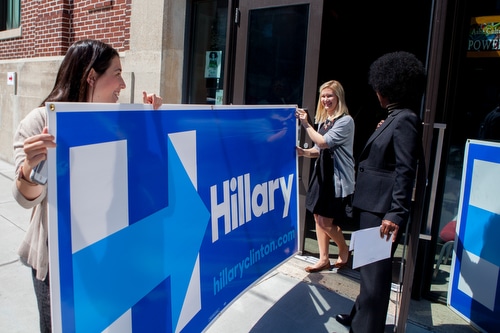 One thought on “Former President Bill Clinton: “You’ve got to elect a President who sees everybody””