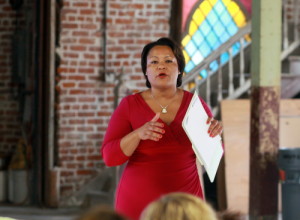 A temporary site for a centrally located “low barrier” shelter for the homeless in New Orleans that would provide protection from the elements and access to public services could be open as soon as October, City Councilwoman LaToya Cantrell said this week.

The concept is based on a similar model in San Antonio, and both the city of New Orleans and the Downtown Development District have pledged $1 million each — for a total of $2 million — toward its creation, Cantrell told the Faubourg Avart Neighborhood Association in their spring meeting Wednesday evening. City officials are negotiating with a property owner for a temporary location for the shelter, but Cantrell said she could not disclose it until those conversations are complete, though it could be operational by October.

Some homeless people simply aren’t comfortable living inside, and this will allow them to stay outside safely “in an environment where care surrounds them,” Cantrell said.

“It’s not warehousing people,” Cantrell said. “It’s giving people a quality, safe environment. … If you still want to be outside, you can be, but you’ll be protected from the elements.”

Cantrell said that the shelter must be in a central part of the city where homeless people already tend to congregate, not in an outer area such as New Orleans East (where some officials considered putting it). City Hall sources say that the temporary site is not in a predominantly residential area, however, and is more industrial and commercial.

Although the shelter will meet a public good, Cantrell said her sympathy for the situation stems partly from her own personal experience. Her stepfather spent years homeless on the streets of Los Angeles, so separated from society that his family literally had to drive around looking for him when they wanted to check on him.

“It wasn’t that he didn’t have family that cared about him, because we love him,” Cantrell said. “It’s where he was at that time.”

After 15 years of that life, however, her stepfather returned to “normal” society, and today no one would ever realize that he spent so long on the streets, Cantrell said. Her hope is that the low-barrier shelter will help people in a similar situation get the help they need more quickly.

Members of the audience had a number of questions about the project, though no one expressed any opposition to it. Its funding will come from the city, as part of the package of services that New Orleans already provides to the homeless. Because of the health services offered, the expansion of federal medical programs in Louisiana will help, and once the project shows some success, private donations will follow.

When asked how the city will convince homeless people to go the shelter, Cantrell said that in some cases, the police may bring them there if they are found sleeping in other parts of the city. But if it is created correctly, it will be a place they want to go, because it will satisfy their needs in a way that existing services have not been able to.

The shelter is not intended to replace any of the programs already in place in the city, Cantrell said; indoor shelters, transitional housing and other programs will all continue to serve homeless people who are ready for them. The low-barrier shelter, however, is intended to serve people who have not yet accessed those types of services, for whatever their reasons.

“They’re going to be treated with respect,” Cantrell said. “If I had to stay there, we could stay there and be safe. Right now you have families on the street that have to be broken up, because we don’t have shelters for families.”

Wednesday’s meeting also covered a wide range of other topics, including drainage and road issues in the neighborhood, upcoming revisions to the city’s Master Plan, and a presentation by New Orleans Fire Department Superintendent Tim McConnell about the upcoming vote on property-tax increases for fire and police services. To read our live coverage of the meeting, see below.