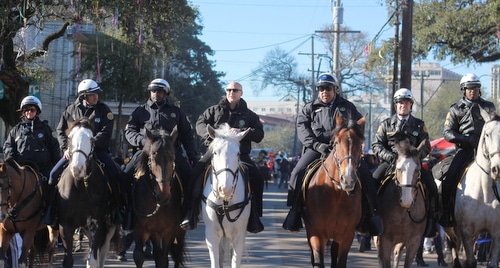 Differences in the use-of-force policies between the New Orleans Police Department and the Jefferson Parish Sheriff’s Office have come into sharp relief this week, following the fatal shooting by Jefferson deputies of a suspect who had fled them into Central City as Lundi Gras parades rolled just a few streets away.

Eric Harris, 22, had an encounter with Jefferson Parish sheriff’s deputies on Monday, Feb. 8, at the Oakwood mall in Gretna, and deputies Henry Dejun and Kenneth Bonura began pursuing him “after learning he was armed with a gun,” according to NOPD reports on the case. Harris drove across the Crescent City Connection into Central City and stopped in the 2200 block of Philip Street, near Simon Bolivar Avenue, where the two deputies shot and killed him after his car allegedly began moving toward them, police have said.

Harris’ girlfriend, who was in the car at the time but uninjured in the shooting, has disputed that he was attempting to drive the car toward them, but a video from the scene shows that it moved in their direction. A Glock handgun was found in the car, nine shell casings were recovered from the scene, and an autopsy later showed Harris had been shot at least four times.

Jefferson Parish officials determined through their internal review of the case that the shooting was “justified,” while the NOPD Public Integrity Bureau Force Investigation Team conducted its own investigation.

Controversy over the shooting flared this week, after NOPD Deputy Chief Arlinda Westbrook told Harris’ family members during a public meeting that any NOPD officers who had fired under similar circumstances would have been arrested “on the spot,” according to a report on nola.com. The New Orleans Police Department’s consent decree prohibits officers from shooting at a suspect in a moving vehicle unless that suspect is using another kind of deadly weapon, but the Jefferson Parish Sheriff’s Office does not have a similar policy.

(Westbrook also explained why the Jefferson Parish deputies were continuing the chase in Orleans Parish, according to the nola.com article: “The Jefferson deputies were not bound by New Orleans procedures after crossing the parish line, Westbrook said,” writes nola.com reporter Ben Myers. “Pursuits that enter different jurisdictions are typically assumed by officers where the pursuit has entered, Westbrook said, ‘but there wasn’t time for that in this instance.'”)

The Fraternal Order of Police immediately issued a statement saying that Westbrook should be removed from her position for those comments. Her words, the union says, will have chilling effect on officers trying to do their jobs.

“We live, and police officers work, under the rule of law. People are not arrested or put in jail for violating policies, unless that violation is also a violation of the law,” the police union wrote. “The law does not prohibit shooting at a moving vehicle when the vehicle is being used as a weapon. The fact that NOPD has a policy that addresses the use of force with regard to moving vehicles and JPSO does not have such a policy is neither here nor there.

“These statements are ludicrous, reckless, and unnecessarily inflammatory,” the police union’s statement says. “These statements bring disrepute to the department and in making these statements, Ms. Westbrook has proven that she is not fit to be a member of the New Orleans Police Department.”

On Wednesday, NOPD Chief Michael Harrison stepped into the discussion during the department’s weekly meeting of ranking officers. Westbrook, Harrison said, “misspoke” on the issue, which she has since acknowledged in lengthy conversations with him.

“It was a mistake,” Harrison said. He added, “Who among us hasn’t said something we wish we could have said differently?”

The police union’s demand that she be fired is likewise an over-reaction, intended to inflame tensions between officers and the NOPD administration, Harrison said. Speaking to a room full of the commanders who lead each district, Harrison asked them to reassure their officers that common sense should indicate that Westbrook’s statements were incorrect. The New Orleans Police Department has never arrested an officer “on the spot” for actions taken in the course of duty, Harrison said, but instead investigated each incident and given the officers their proper due process.

Harrison said he has also spoken to Jefferson Parish Sheriff Newell Normand and sheriffs of neighboring parishes to reassure them of the same thing.

“There’s some sentiment that they wouldn’t want to help us in the future, or pursue people in the city. I called them personally to tell them it was just a mistake,” Harrison said. “None of their deputies would be arrested ‘on the spot.’ All of that is ludicrous. … We have never done that.”

The NOPD conference room was completely silent while Harrison spoke about the issue, but none of the commanders asked any questions of him after he finished speaking. The NOPD investigation into the shooting of Harris is ongoing.