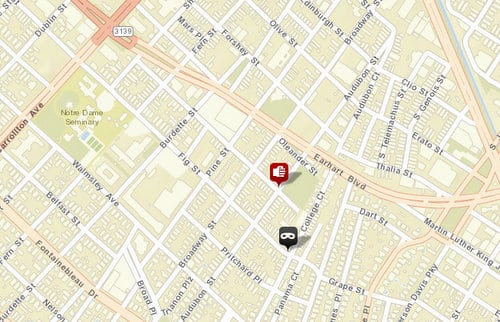 A shooting Monday morning in the 3100 block of Audubon Street, and a burglary on Fig Street now attributed to the shooting victim, police say. (map via NOPD)

The 16-year-old boy found with a gunshot wound to the leg Monday morning on Audubon Street may have been shot during a break-in attempt nearby, New Orleans police say, but no homeowner has thus far admitted to shooting him.

Responding officers found the 16-year-old boy in the 3500 block of Audubon Street with a gunshot wound to the leg shortly before 7 a.m. Monday, Feb. 15, said NOPD Sgt. Patrick Kennelly of the Second District violent crimes division. The teen initially told the police a story about being shot by a strange-looking man in a passing car in the 3100 block of Audubon, but most of those details didn’t check out, Kennelly said.

When detectives spoke to the teen again in the hospital, he admitted that he had actually been shot while trying to break into a house near the 3100 block of Audubon, Kennelly said. The teen had heard about a Playstation inside the house and wanted to steal it, but as he was trying to enter through a window, a man shot him, he told police from the hospital, Kennelly said.

Investigators have returned to the area and talked to residents, and while some said they heard the gunshots, no one has actually stepped forward to admit to the shooting, Kennelly said.

“We’re trying to identify exactly which house and who it was that shot him,” Kennelly said. “It’s possible this is justifiable.”

The teen was found with a hoverboard next to him, and it has been determined to have been stolen in a separate case in the 7000 block of Fig Street the same morning, said NOPD Sgt. Warren Keller of the Second District property-crime division. The teen admitted to that burglary as well and will be charged for it when he is released from the hospital, Keller said, and they are investigating his involvement in at least three other nearby burglaries as well.

NOPD Commander Shaun Ferguson acknowledged it was strange for a homeowner in a self-defense shooting not to identify themselves, but speculated that the person may be unsure of their own legal standing.

“They may be scared they may get in trouble,” Ferguson said.

Anyone with information is urged to call the NOPD Second District station at 658-6020 to speak to a detective, or CrimeStoppers at 822-1111 to leave an anonymous tip that could be eligible for a cash reward.

9 thoughts on “Teen found with gunshot wound on Audubon Street may have been shot during break-in attempt, police say”