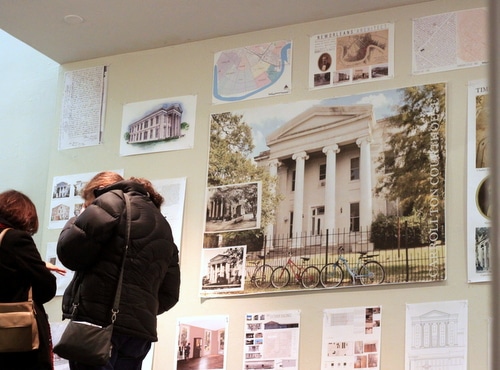 Possible futures for the vacant Carrollton Courthouse include a school for building trades, a community gathering place or an event venue, according to a series of visions presented by Tulane architecture students on Thursday evening, but time is running short before the Orleans Parish School Board decides to sell the historic building.

The courthouse was built in 1855 by prolific New Orleans architect Henry Howard in the Greek Revival style, drawing its inspiration directly from the ancient temple of Erechtheion in Athens, built circa 400 B.C., according to research compiled by students in the Tulane School of Architecture building preservation studio. It served as a courthouse for 20 years — with a jail building behind it — then spent more than a century as the home for various schools, McDonogh No. 23, Ben Franklin High School, Lusher Middle School and most recently Audubon Charter.

Audubon Charter left the building in 2013 as the aging structure and decrepit portable outbuildings deteriorated, leaving the Orleans Parish School Board with the difficult decision of what to do with it and annual bills of around $100,000 to keep it insured and minimally maintained. Amid outcry from neighborhood activists and designation of the building as one of “America’s 11 Most Endangered Historic Places,” Orleans school officials agreed to postpone any decision about its fate for more research, including consideration by the Tulane architecture students.

Based on their research into the building’s history, design and current condition, the students presented three possible uses for it:

Each of the proposals was accompanied by an analysis of potential revenue sources, such as tuition from the building students or rent from the venue space. The upstairs rooms could be individually rented as office space, and the former cafeteria outbuilding on the Hampson space side could be repurposed into a cafe or restaurant to help drive revenue, the students suggest.

Various estimates of the cost to renovate the building, however, begin around $10 million and quickly escalate, activists said. Complicating the building’s future, state law only allows the School Board to sell the building directly to another governmental entity — any private interest must compete for the building through bids or auction. (Read more about those restrictions here.)

Orleans Parish School Board member Woody Koppel and chief financial officer Stan Smith, who attended Thursday’s forum, told attendees that the OPSB has already delayed action on the building longer than it had originally intended — the bills for insurance, maintenance and groundskeeping continue to divert money from other priorities involving students.

The OPSB is preparing another list of properties to consider as surplus, and the courthouse will likely be on that list, Smith said. While simply placing the property on the list does not determine that it will be immediately disposed of, it will reignite the conversation, Smith said.

Thus, if anyone has a proposal for the courthouse’s future, that individual needs to step forward “with all due urgency,” Koppel said.

“We need to get it to a resolution quickly,” Smith said.

The School Board has expressed some willingness to place restrictions protecting the building when it does go to sale, though it is not currently included in any district that would give it official landmark protection by the city. Meanwhile, as the courthouse sits vacant, its deterioration is accelerating — heightening the need to find it a new owner soon.

“It’s going downhill slowly but surely,” Stubbs said. “When buildings are used, they’re properly preserved. … This is an urgent situation from the standpoint of saving this building. If anyone has ideas that are viable, now is the time.”

Read our live coverage of the forum below:

4 thoughts on “Ideas abound for old Carrollton Courthouse, but time is running out”