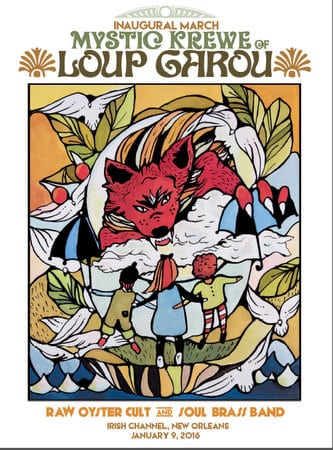 The poster for the inaugural Krewe of Loup Garou, designed by artist Merrie Morrow. (courtesy of the artist)

The poster commemorating the newly formed Krewe of Loup Garou’s inaugural march this Saturday through the Irish Channel places three children shielded only by parasols opposite the infamous Cajun creature of the night — simultaneously capturing the spirit of the neighborhood, the beloved civic leader the parade will memorialize and the goal of the event’s fundraising effort in her honor.

In the image, a striking public debut for New Orleans-based artist Merrie Morrow, the bright red beast of swampland imagination looms on a high horizon, its expression somewhere between menacing and inviting. Surrounded by banana leaves and white birds, the three children face the loup garou stoically, their arms linked in camaraderie as parasols protect them on either side.

“They look like they have a connection with the loup garou, a little bit,” Morrow said. “They’re not scared of him. They’re not trying to run away.”

The formation of the Mystic Krewe of Loup Garou was announced early in 2015 by leaders of the Irish Channel Neighborhood Association in honor of former association president Kara Morgan, who died in 2014 of melanoma. Morgan was one of a group of neighborhood leaders who banded together in hopes of reducing crime and improving the neighborhood through more public recreation opportunities, but she spent the last year of life advocating for increased public awareness of the dangers of overexposure to the sun.

Morgan’s dying wish was for the neighborhood to create shade structures in area playgrounds and parks, and other Irish Channel neighborhood leaders quickly launched the Kara Morgan Shade Fund to accomplish the goal. Those structures are expensive, however — the project at Burke Park has been estimated to cost around $80,000 because of the foundation work — and the project’s supporters decided that a parade in her honor would make a strong ongoing fundraiser — especially because Morgan was known among friends for her fierce lifelong love of Mardi Gras parades.

As soon as the Loup Garou was suggested as a theme by organizer Adele Hunt, everyone else realized it was perfect, said Kristine Rizzuto, Morgan’s sister. Hunt then put Rizzuto and the other organizers in touch with Morrow, who quizzed them about the parade’s purpose before creating the image. One necessary element, Rizzuto said, was that it prominently feature children.

“The thing I like the most about it is the way that the parasols are protecting them from the Loup Garou, which ties back into the shade fund,” Rizzuto said.

Morrow, who grew up and studied design in North Carolina and moved to New Orleans about five years ago, primarily paints portraits and family images on commission (examples are on her Facebook page) when she’s not at her day job as a barista. The Krewe of Loup Garou poster embodies her whimsical style, reminiscent of early 20th Century fantasy illustration, composed in watercolor and India ink with a stained-glass appearance.

Though the poster is Morrow’s first major public work, krewe organizers said she perfectly captured their vision, even though the artist never met the person the parade will honor.

“I wanted it to not be frightening,” Morrow said. “I think it captures the mystic feel that was spoken to me. It definitely looks magical.”

Morgan’s dedication to neighborhood children is woven throughout the parade. It is timed to roll at 4 p.m. Saturday from the Lyons Center at Tchoupitoulas Street and Louisiana Avenue so that children can easily attend (and also to protect marchers from the damaged streets on the route). The marchers will be joined by children who participate in the Lyons Center programs, wearing their jerseys.

Led by the Soul Brass Band, the route heads down Magazine Street for a stop for a toast at Tracey’s — both a neighborhood gathering point and Morgan’s own go-to bar, partly because children are welcome in the dining area — and ends with an after party featuring the Raw Oyster Cult and DJ Gris Gris at NOLA Brewing, which state regulators allow children to enter (though brewery owners require them to be accompanied by a parent).

“We’ve always made it a point to return that favor and take care of the neighborhood,” Crochet said. “Definitely the Irish Channel neighborhood’s support is something we really, really appreciate.”

The marching parade will have a similar homemade feel to the well-known Krewe of Chewbacchus, organizers said. Marchers are encouraged to build floats they can push or band together with costumes. There is no official theme other than the Loup Garou itself — Rizzuto and a group of friends, for example, will parade as “Toup Garou,” a sly reference to Republican presidential frontrunner Donald Trump’s notorious hairstyle.

“We left it up to people’s creativity,” Smith said. “We didn’t want to be too restrictive, especially as we’re trying to grow and gain members.”

A limited initial run of 100 printings of the Krewe of Loup Garou poster will also become part of the fundraiser, and they will be available at a membership meeting for the krewe at 7 p.m. tonight (Tuesday, Jan. 5) at Tracey’s. The krewe is still seeking individual members and business sponsorships (which may result in additional stops on the route), as well, and anyone interested should contact Irish Channel president Jeremy Smith at president@irishchannel.org. (Anyone who can’t attend can contribute to the shade fund directly at a new GoFundMe site.) Tickets for the after party can also be bought at the door at NOLA Brewing on Saturday.

Rizzuto and Smith laughed that a year of planning turned out to seem like a remarkably short time to assemble a new Mardi Gras parade, but they have high hopes that Saturday’s event will plant the seeds for an enduring tradition.

“People are enthusiastic, and it’s picking up steam,” Rizzuto said. “There’s nothing my sister loved more than a Mardi Gras parade. To have one built around her in the future would be the best outcome I could imagine.”