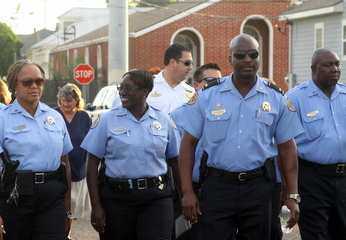 Ferguson’s career in the department has followed a steady upward trajectory over the last five years, most recently with his last promotion to commander in the Algiers-based Fourth District in March 2014. Prior to that, however, Ferguson was a key member of the leadership team for two previous Second District commanders — supervising violent-crime investigations under former Commander Darryl Albert and all investigations under Commander Paul Noel, with a stint as a homicide supervisor in between.

“Ferguson is a 17-year veteran of the NOPD,” according to the NOPD announcement about his promotion. “He has a Bachelor’s Degree in Business Administration from Southern University of New Orleans. He is currently working on obtaining his Master’s Degree.”

In his new assignment, Ferguson replaces Noel, who will now be deputy chief of all NOPD field operations. In the Fourth District, Ferguson will succeeded by Ceasar Ruffin, his own former second-in-command there over the last two years.