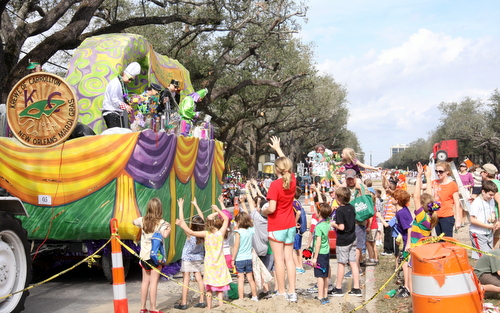 Families navigate around the construction area on Napoleon Avenue to clamor for beads from the Krewe of Carrollton in January 2013. (Robert Morris, UptownMessenger.com)

Despite construction underway on nearly every major transporation artery in Uptown New Orleans less than two months away from Mardi Gras, the City Council approved a 2016 parade schedule this week that suggests krewes follow their traditional routes.

The first Uptown parade, the Krewe of Oshun, will roll at 6 p.m. Friday, Jan. 29, followed by Cleopatra, based on the ordinance passed Thursday by the City Council. Each parade date has a route listed alongside it, and those that roll on Magazine Street, such as Muses or Thoth, are still designated to be on the “Uptown/Jefferson” or even “Uptown/Henry Clay” routes respectively.

“Nothing’s changed as far as we know,” Winkler-Schmit said. “We haven’t heard of any changes as of yet.”

The full schedule of Uptown parades is as follows, according to the ordinance: