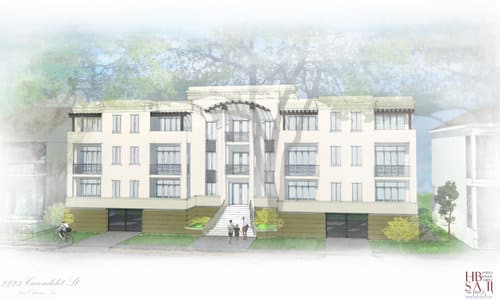 A rendering of the condo building proposed at 2223 Carondelet (by Harry Baker Smith Architects, via City of New Orleans)

An 18-unit condominium is proposed for a vacant lot that was formerly a clinic on Carondelet Street near the Garden District, city documents show.

The development is proposed for a 15,000-square-foot lot at 2223 Carondelet Street (just upriver from Jackson Avenue) across from the Anshe Sfard synagogue, and is proposed to be a four-story, 28,400-square-foot condo building with 18 units, according to documents filed with the city. The building will be 52 feet tall and have 27 off-street parking spaces, most of which would be in a covered garage. A common roof deck is planned for the fourth floor, and all the units have their own balconies.

City regulations call for 1,000 square feet of lot area per unit, however, so the developers (a company called 2223 Carondelet LLC owned by James Brown III and Sam Solomon) are seeking a waiver to allow the higher density. City planners have recommended against the waiver, according to their report.

“The staff believes that the applicant could modify the proposal to include 15 dwelling units which would eliminate the need for a waiver,” according to the staff report. “Since the majority of the residences in the area meet or exceed the minimum lot area per dwelling unit this would allow the applicant to develop the property similarly to other properties in the area.”

Attorney Justin Schmidt has argued, however, that the 18-unit plan is the result of design directives issued by the city’s own Historic District Landmarks Commission. In fact, the site is surrounded by other large properties — including a 7-story condo building, a 14-unit apartment building and a youth hostel — so the developer’s request would not alter the character of the area.

“The reality is that in this in this particular neighborhood, larger units are not typical and would simply not be feasible,” Schmidt wrote in a letter to city officials. “… The mere fact that the petitioned property is undeveloped does not mean that is should adhere to a stricter standard than that of its neighbors.”

The request was scheduled to appear before the city’s Board of Zoning Adjustments on Monday morning. That hearing is still ongoing; check back shortly for a result.