The two intruders in a Broadway Street home-invasion robbery who bound several college students as they ransacked the house were clearly looking for drugs — but may have been at the wrong house by mistake, New Orleans police said Wednesday.

The men entered a college student’s residence in the 800 block of Broadway Street around 4:45 p.m. Sunday, Nov. 15, and demanded drugs at gunpoint from the occupants there, police said at the time. When a roommate returned home during the incident, the intruders bound him as well while they continued to search the house, tying up the victims with belts before leaving with wallets and jewelry, police said.

One distinguishing feature of the robbery was the gun used, an olive-green, “Army”-style handgun, either a 9-mm or a .40-caliber, said NOPD Lt. Jennifer Dupree, who leads investigations in the Uptown-based Second District. But even though the suspects were demanding drugs, there is no evidence that any drug activity takes place at the home, Dupree said.

“They start immediately asking, ‘Where’s the weed? Where’s the cocaine?’, so we know it’s a drug rip,” Dupree said Wednesday at the weekly officers’ meeting at NOPD headquarters. “We just don’t think the victims on this were the intended targets. We think they may have hit the wrong house.”

After the robbery, the victim’s credit cards were used in a gas station in Metairie, providing police with surveillance video showing a possible suspect. Investigators are also pursuing leads that may help them identify the suspects’ vehicle, Dupree said.

One of the intruders is described as a 6-foot-1, medium-build white man in his 20s with short black hair, a “light scruffy beard” and chest tattoos, wearing blue jeans, a blue hoodie, and carrying a black and green pistol with a silencer, police said at the time. The other intruder was also a white man of similar build, wearing a turquoise shirt, blue jeans and a brown stocking on his head. 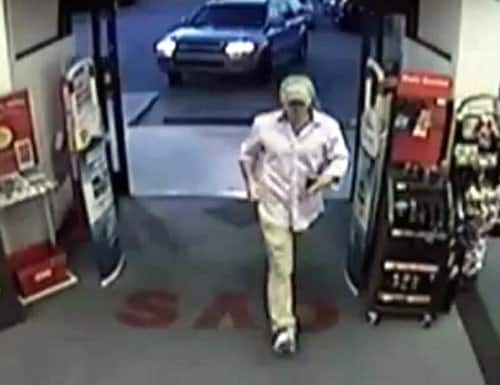 A still from the surveillance video provided in relation to the home invasion on Broadway Street. (via NOPD)

In a separate case, police were also called to a report of a possible home invasion around 2:30 p.m. Wednesday in the 7500 block of Willow Street.

The victim, a man in his early 20s, was sleeping when a noise woke him up, and he saw four men at his door, he told police, according to the initial report. They demanded money and drugs, then tied him up, ransacked the home and left with his cell phone, money, keys and his vehicle, the report states.

Police sources said Wednesday the Willow Street case shows no signs of a connection to the case on Broadway Street, and remains under investigation. 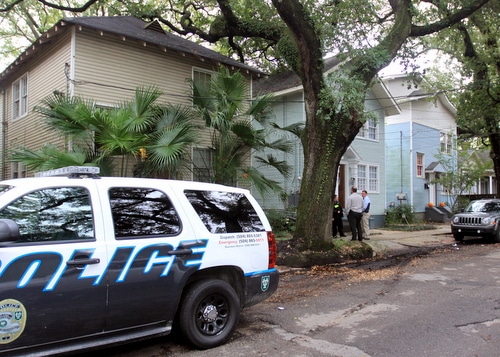 New Orleans Police detectives confer with Tulane police officers on Wednesday afternoon in the 7500 block of Willow. A home invasion was reported there, but has not been confirmed. (Robert Morris, UptownMessenger.com)

Anyone with information in either case is urged to call the NOPD Second District station at 658-6020 to speak to a detective, or CrimeStoppers at 822-1111 to leave an anonymous tip that could be eligible for a cash reward.

[Note: This article was first published at 4:23 p.m. Wednesday, and updated Thursday morning with additional details about the Willow Street case.]