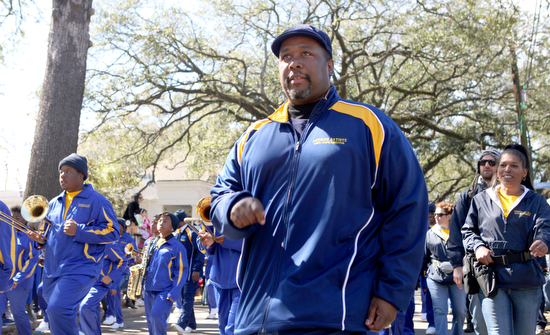 “Treme” actor Wendell Pierce marches with students from his character’s school in the Krewe of Carrollton in February 2012. (Sabree Hill, UptownMessenger.com)

Sometimes, you just have to sit back, watch, and eat some popcorn.

At least, that was my personal reaction to viewing the ongoing battles between local actor, producer, and businessman Wendell Pierce and local neighborhood groups and advocacy organizations. The battle started back in July when Pierce and his business partner, former mayoral candidate Troy Henry, proposed to redevelop a former auto parts store on St. Claude Avenue.

Predictably, this was met with opposition from local busybodies, a.k.a. The Faubourg Marigny Improvement Association (FMIA). Their objections seemed to spawn from the fact that the existing structure, which is nondescript, heavily blighted, and has been drastically modified over the years, would not be preserved.

Pierce then proceeded to Twitter, where he released a couple of Tweets signaling his displeasure to the FMIA’s opposition and suggesting ulterior motives.

“Faubourg Marigny Improvement Association – trying to steal a property from me to stop my business on St.Claude. Not hipster enough? Gentrification,” Pierce’s first scathing Tweet read. “Faubourg Marigny Improvement Association is just a front for developers posing as civic activists to dominate and control the real estate for profit,” read the second.

Pierce was probably on-point, to at least some degree, on both counts. He has a history of not being on-board with the prevailing agenda of gentrifying impoverished neighborhoods in New Orleans’ so-called “core neighborhoods.”

Three years ago, I wrote a column describing another battle between Pierce and the Coliseum Square Association (CSA), which purports to represent the entire Lower Garden District. He wanted to build a grocery/gas station in an industrial zone near the river and faced opposition because the project would require rezoning.

At that time, I sided with Pierce and slammed the ironically-acronymed CSA, noting that the group’s “default position is to keep properties out of commerce, to maintain the disuse.” Such a planning scheme “depends on having a steady stream of investors willing to grovel and ultimately conform, even when it might cost them profitability.”

Of course, the FMIA denies being anti-development. Lisa Suarez, president of the FMIA, opined that “[w]e don’t want to keep those parcels that are empty, empty, we want sensitive development.” That’s basically saying that they don’t want to destroy the good, but you insist upon the perfect. And their vision of the “perfect” is not something that others might find desirable.

In any event, the fracas died down in the public eye and Pierce’s Tweets were soon forgotten. However, in September, an inadvertently-released email reignited the firestorm. The email from Cheron Brylski, a local political consultant, was directed towards two notoriously anti-development organizations: the Vieux Carré Property Owners, Residents & Associates and the French Quarter Citizens group.

NBC News described the contents of the email thusly:

In the memo, Brylski writes in one particular district race that residents may donate services “even though it appears the vote counts are not favorable for a white candidate in that district” and that the two groups she was consulting should continue to “feel out” a black member of city council “who is increasingly concerned about voting with the “whites” on the Council.”

Mentioned later in the memo is a need for “black spokespersons” and the suggestion that two white council members may feel “increasingly isolated as the “whites” who are against development.”

That last bit about being the “whites” against development apparently stuck in Pierce’s craw, given his background in dealing with predominantly-white neighborhood groups and their anti-development tendencies. Accordingly, this past week Pierce penning an opinion piece for NBC News in which he accused Brylski and the groups she was advising of racism.

“Taken in isolation, none of the details has the shock value of an epithet or the N-word, but seeing them all together in one memo reveals racism far more damaging than a verbal insult,” Pierce wrote. “It should have been a scandal, but in a sad commentary, it barely got any notice from a local press apparently all too compliant with those in high society who throw fancy parties at Carnival time.”

Pierce later concluded: “The recent attempts by New Orleans’s wealth and power to blackwash their image while a compliant local media whitewashed the story of their racially motivated machinations shows that social structures built over hundreds of years have not yet been demolished.”

Pierce is right. The memo should have gotten more attention. I probably should have written about it before now, because it’s disturbing on multiple levels.

First, the memo shows that these old-guard neighborhood groups tend to view elections through a strictly racial lens. To the extent they engage blacks, they intend to do so simply by trotting out a token black spokesperson. It’s shameless and appears even worse behind the scenes.

Secondly, the memo indicates that holding up development in this city is viewed as strictly a “white” thing. Pierce didn’t expand on this point (which is undoubtedly personal to him) but it’s crucial because those reflexively opposed to development also tend to be pushing gentrification. The only types of development that are welcomed with open arms – given every waiver and dispensation imaginable – are those aimed at a wealthier, whiter crowd.

Thirdly, the memo shows how numb we are to the prevailing agenda of New Orleans’ white elites. We know that they to “fix” old neighborhoods by forcing out existing residents. We know that they seek to consolidate power for themselves. We aren’t shocked by it.

That’s why my inclination is simply to break out the popcorn and watch. Despite Pierce’s national plea, there’s no expectation that anything will change. Perhaps we all need to start acknowledging a bitter truth: for our city, that strategy isn’t working.