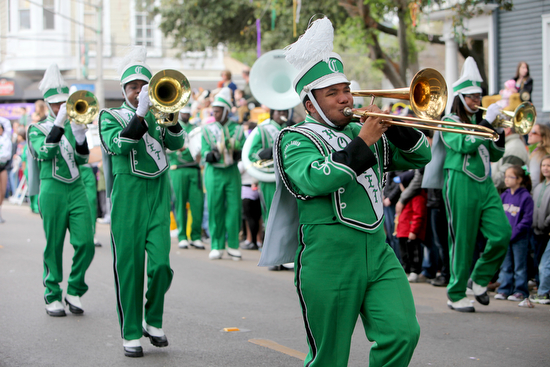 The former Walter L. Cohen High School — which only a few years ago was a bottom-barrel F-rated school labeled one of the most dangerous in America — is on the precipice of scoring a B rating, officials with New Orleans College Prep charter organization said Thursday, a crucial step towards alumni goal of restoring it to the glory of decades past.

The New Orleans College Prep charter network governs three schools that will be receiving letter grades from the state over the next month — Cohen, Crocker and Sylvanie Williams — as well as the newly created Hoffman campus of kindergarten students (which will not be graded until its students reach third grade). While the state has not yet released official grades from the 2014-15 year for any schools with elementary grades, CEO Ben Kleban gave the College Prep governing board a preview of what to expect based on the raw test scores and other data that have been returned.

Cohen — not included in the high-school scores because it technically includes eighth grade — showed test scores and graduation rates to earn a 79.2, a substantial increase from the prior year’s 72.5 and a high C on the state’s 150-point grading scale. While Cohen’s scores on the new Common Core-aligned tests slipped, it showed growth in every other academic area — graduation rates, end-of-course and ACT testing, Kleban said.

But the school will also likely receive bonus points to increase that score even further — it was awarded 10 two years ago, and 7.5 last year — based on academic growth shown by its at-risk students. Those bonus points are calculated relative to the growth for similar students statewide, Kleban said, so there’s now way for the school to predict how many will actually be awarded.

Further, because 2014-15 was the first year students are being graded on the new Common Core-aligned tests, the state has decided to keep the proportion of letter grades for each school the same as it was last year on a temporary basis, Kleban said. (In other words, if all schools see decreases, the threshold for each letter grade will also be lowered, so the state will have the same number of A and B schools as last year, even if the schools receiving those grades are different.) This, too, increases Cohen’s chance of receiving a B grade overall.

“That curve will probably come into play,” Kleban said. “The cutoff to get to a B will likely be lower, and it might get us over the hump to a B.”

The Crocker College Prep elementary school also showed slight growth in its test scores, earning enough for a 60.7 or a D rating, Kleban said. Last year, the school’s score based on testing was a 57, but it also received 9 bonus points. As with Cohen, if Crocker earns enough bonus points and the curve swings low enough, Crocker could receive an overall C rating this year, Kleban said.

The numbers at Sylvanie Williams are more troubling. After a startling 20-point decline from a solid C at 72.4 in 2013 to a D at 52.8 in 2014, the school is expected to slip another point or two when the 2015 scores are released. The school received no bonus points last year, Kleban noted, and cannot likely count on any this year either.

Kleban said the slight drop is likely attributable to math tests, where the changes to the teaching methods are being felt most acutely. The entire state fell about 5 points in math testing, and the RSD fell about 4, while Sylvanie Williams only fell about 2 points, he noted.

“I think the instructional shifts for Common Core in math are much greater,” Kleban said. “The math section became more about solving a problem-solving task, rather than just calculations.”

While the decrease is troubling, Kleban said he still feels confident in the ability of the school’s new administrators to turn the problem around. For example, on the first round of benchmark testing this fall, a much higher proportion of students demonstrated mastery of the material. The students in the lowest grades — who aren’t being tested yet, are also showing particular growth, Kleban said.

Sylvanie Williams has “had some real wins that you can’t see in this data,” Kleban said. “The data shows the kids coming up in first and second grade. Unfortunately we had a couple of classrooms that didn’t get there. … We’re not ignoring shortfalls, but we are seeing indicators of progress.”

What makes the situation at Sylvanie Williams pressing, Kleban said, is that the school is in the second term of its charter. While a D would be sufficient to get the charter renewed once, a C is required for the second renewal. By the end of the 2016-2017 school year –beyond when the curve for the new Common Core tests will have expired — Sylvanie Williams must have returned to a full C in order to be renewed.

College Prep board members expressed concern, asking whether there are additional resources needed at Sylvanie Williams in order to correct the situation. Kleban replied that he has already allocated the resources he thinks are necessary, but that the next board meeting will focus specifically on the challenges and data at Sylvanie Williams.

Jim Raby, a College Prep board member and leader of the Cohen Alumni Association, said after the meeting that he was pleased with the continued improvement at his alma mater, which appears to be entering a new era of academic success.

“There’s no question tremendous progress has been made,” Raby said. “We’re very happy with it.”

Cohen, too, faces challenges, however. This year’s incoming eighth grade class was lower than expected, causing some faculty members to be reassigned to other campuses.

Now that the academics are on the rise, Raby said College Prep needs to work to improve the school’s reputation in the community — moving beyond the older perceptions of a dangerous, F-rated school. Likewise, recent news that the school will be rebuilt in its present location instead of moved to a former dump site and combined with the former Booker T. Washington name will also help ease families’ concerns about Cohen’s future, Raby said.

Board chair Peter Harding said he expects over time for more students to move directly from Crocker and Sylvanie Williams directly to Cohen.

“When students make a decision to go to another school, the Cohen option should be so familiar,” Harding said.

Raby said the alumni are also looking into ways to make themselves more of a resource. Most members of the association graduated from the school in the 1980s or earlier — Raby himself was class of 1955 — reflecting the better days of Cohen’s reputation. Now, those older alumni are trying to reconnect with younger Cohen graduates, bolstering their overall presence in the city.

“When I was at Cohen, kids came from Kenner to attend,” Raby said. “Cohen College Prep can ultimately be a return to that same school, and bring it back to its glory days. Kids will be standing in line to come to Cohen.”