The large corner lot that locals knew as the Weber Garden Center for decades and more recently the Freret Garden Center is planned to become two new buildings as the latest major project planned for the corridor, architects on the project told city officials Monday.

Thea Marvin, granddaughter of the business’s founder August J. Weber, and her family members sold the Garden Center property earlier this year to a company called Freret Development LLC (represented by Andrew Jacobs) to resolve ongoing family ownership issues over the parcel. After the pots of trees and shrubberies were all removed, a large “For Lease” sign appeared on the fence this summer.

On Monday, designer Alyce Deshotels of Studio WTA architects appeared before the city’s demolition panel with a request to remove the small portable building remaining on the site in preparation for construction of two new buildings.

One, a smaller two-story mixed-use building on the upriver corner, would have an upstairs apartment and a retail women’s clothing store on the ground floor, said architect Wayne Troyer of Studio WTA.

The other, larger building is planned to be 4,984 square feet, and could be built out as either retail space or a restaurant, Troyer said, depending on the interest from tenants.

“The exterior is composed of perforated metal screens that will create a diffused light pattern during the day and we are studying some lighting options that would animate the space at night,” Troyer said. “We’ve incorporated a large front porch in order to respond to the street life culture of Freret Street and their regular neighborhood festivals.”

The site will have 22 parking spaces in the rear, accessible from a driveway between the two buildings, Troyer said.

The application drew no opposition. The only speaker from the audience was Freddie Costello, who said he’s lived in a house just up Robert Street for 50 years, but that he expects to be remodeling it for at least another year. Rather than tear down the shed, Costello asked that the developer move the building to his property for use as living space while he continues working on his home.

“I’m 200 feet from the property,” Costello said. “By the time you bring all those bulldozers in there and debris, it’s easier just to give it to me.”

Officials on the Neighborhood Conservation District Advisory Committee said that the same permit would be required whether the building is demolished or simply moved off the lot. With Costello’s support, the committee voted in favor of the developer’s request. 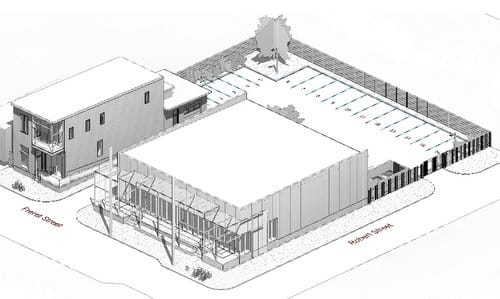 The site layout proposed for the two buildings at 5007 Freret. (image by Studio WTA, via City of New Orleans)