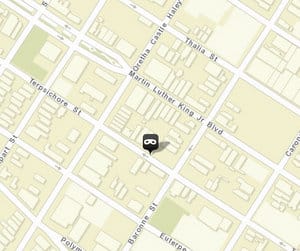 After a Terpsichore Street resident shot an alleged burglar attempting a mid-day break-in of his shed on Tuesday, New Orleans police say the injured man is recovering and the homeowner is not being charged, authorities said.

Around 11:30 a.m. Tuesday, Oct. 27, a 68-year-old man heard noises from the alleyway next to his home in the 1800 block of Terpsichore Street (near O.C. Haley Boulevard), so he armed himself and walked outside, the homeowner told police afterward. There, the homeowner saw 48-year-old Kelly Jackson carrying items out of his shed, so he confronted him at gunpoint “and attempted to detain him until the police were called,” according to a NOPD report on the case.

“The victim said Jackson attacked him and a physical altercation ensued,” the report states. “During the altercation, the victim fired several shots striking Jackson in the stomach, arm and leg. The victim immediately called for the police while Jackson ran and collapsed near the intersection of Simon Bolivar and Felicity Street.”

Jackson was taken to the hospital by emergency services, and his injuries do not appear to be life threatening, the report states. Upon his release, Jackson will be booked on a simple burglary charge — and detectives are meanwhile investigating his possible involvement in other burglaries in the area.

“The homeowner is cooperating with detectives and has not been arrested in connection with the shooting at this time,” the report states. “As with all similar shooting investigations, this case will be referred to the Orleans Parish District Attorney’s Office for review.

Anyone with information is urged to call Sixth District detectives at 658-6060.