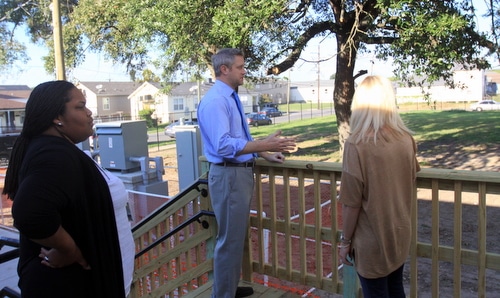 More than 50 4-year-olds started their school careers today at the new John W. Hoffman College Prep campus on South Prieur Street, a Head Start program created by the New Orleans College Prep charter network in hopes of fulfilling the neighborhood’s desire to see a school rebuilt on the site.

The Hoffman campus is the latest expansion for the rapidly growing New Orleans College Prep network, which now enrolls a total of 1,400 students around the Uptown area at Sylvanie Williams, Crocker and Cohen campuses. Its modular buildings were salvaged from the closure of a Treme charter school, moved to the former Hoffman site and refurbished over the summer, according to an article in The Lens. The program represents a partnership between Kingsley House and New Orleans College Prep.

“We are standing at the foundation of great things,” said Eboni Walker, the Hoffman campus director at a meeting of the charter network’s board on Tuesday afternoon. “This place is going to be different. We’re going to show our community that we can provide children with the high-quality experiences they need to be successful at life.”

The long-term plan, explained CEO Ben Kleban, is to grow the school into a new K-8 elementary school to replace the old campus. With modulars, the site has room to expand to the second grade, Kleban said, after which a larger permanent building would be necessary.

Kindergarten at Sylvanie Williams and Crocker are both full, fed by their preschool programs, but officials with the Recovery School District and Orleans Parish School Board are now evaluating how the excess kindergarten seats will affect decisions related to opening new schools moving forward.

“The kindergarten surplus is forcing both entities to think about what they’re going to do,” Kleban said, while noting that long-term demographic studies still suggest the need for more schools in New Orleans.

The school system’s first official student counts were taken Oct. 1, and showed a number of other trends relating to College Prep’s enrollment. At Walter L. Cohen College Prep High School, the incoming ninth grade students were far lower than expected, about 121 instead of the 175 budgeted for or even the traditional number of around 140.

Part of that shortfall, Kleban said, was that College Prep had increased its incoming class size at the request of the Recovery School District, which was expecting a surge in ninth graders that did not materialize. But College Prep board chair Peter Harding noted that Cohen is likely still hampered by poor results in years past that College Prep has improved upon.

“The image of Cohen in the community is still a poorer image than the results of the school,” Harding said.

Cohen’s letter grade last year was a C, and is expected to grow this year to either a higher C or a B — higher than some schools that actually were more successful in placing ninth graders, Kleban agreed. The school will increase its marketing around this success this year, Kleban said, with an additional emphasis on extracurricular programs such as marching band to attract students themselves and not just their parents.

“There is a disconnect between the performance of Cohen over the past few years and the interest from parents,” Kleban said.

Sylvanie Williams was rated a D in 2013-14, down from its C the year before. Whether it will regain the C when the 2014-15 scores are released in December is unclear, Kleban said, but the school’s goal is definitely to earn the C back in the current year. Likewise, Crocker is also right at the margin of a D and C, and also has the goal of growing to a C in the current school year.

The enrollment numbers also present other challenges. College Prep has earned a reputation for strong services for special-education and English-as-a-second language students, creating student populations in its network that exceed the figures citywide. The network expects an overall special-education population of more than 15 percent this school year — with a concentration of 22 percent at Cohen High School — compared to what Kleban described as a citywide average that traditionally hovers around 12 percent.

MacPhee noted that the data contradicts a frequent criticism of the charter system.

“Charters are constantly getting accused of turning away special-ed kids,” MacPhee said. “My experience has been just the opposite.”

The shortfall of incoming ninth graders at Cohen will lead to a reduction in per-pupil funding. Even after reassigning two of the unneeded Cohen teaching positions to other schools, what had been expected to be a surplus of about $136,000 is now projected to be a budget deficit of around $240,000, said NOCP chief financial officer Jonathan Tebeleff.

The administration is looking at ways of reducing that deficit over the course of the year. For example, a number of incoming grants are still be in the works, Kleban noted.

“I’m confident in getting back to break even,” Kleban said.

Harding, however, noted that most of the $445,000 in startup costs for the Hoffman campus construction were absorbed this year instead of spread out over time, and without that new investment, the budget would still be a positive. With the Hoffman campus expected to become financially self-sustaining next year, Harding said the budget deficit looks to be a single-year issue at most.