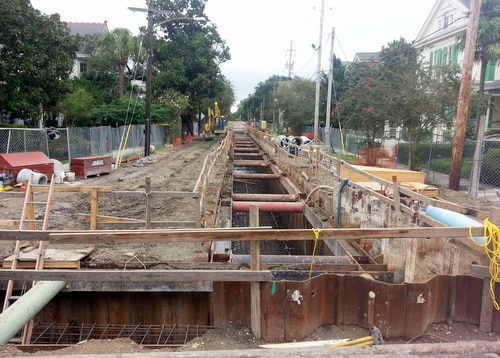 Construction on Prytania Street stretches from one curb to the other, with an open trench down the middle. (Robert Morris, UptownMessenger.com) 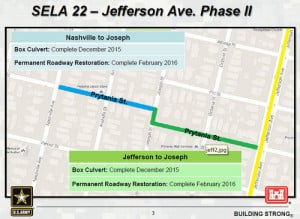 On a recent overcast Monday afternoon, the large pit that Prytania Street has become was almost completely quiet except for the gentle drip of water being pumped out of the bottom — fueling residents’ frustrations that the restoration of their roadway and their access to their homes has been delayed again until February of next year.

Officials with the U.S. Army Corps of Engineers, however, say that construction is still proceeding, and that they hope the February completion date is the last delay that segment of the project experiences.

The Prytania Street leg of the SELA drainage project stretches from Jefferson Avenue to Nashville, an extension of the much larger Jefferson Avenue canal construction from Dryades to Constance Street, scheduled to be done next summer. Because Prytania is only part of the overall $46.2 million Jefferson Avenue contract, the discretion of how to deploy workers is left to the contractor, Cajun Construction, and the Corps does not have direct legal control over the contractor’s choices, said John Templeton, the project manager for the SELA projects in New Orleans.

In a town hall meeting with Prytania residents in February, officials predicted that the canal construction would be finished between Nashville and Joseph by July 1, and from Joseph to Jefferson by Nov. 1, with the roads rebuilt over each section about a month after the canal was finished. Cajun Construction began shifting that schedule over the summer, however, prompting a flurry of meetings with Corps officials.

A completion date of February, Templeton said, was the best they could work out.

“No one was pleased with that moving of the Prytania completion date,” Templeton said. “I do not think it was anything to do with any improper installation or any defects in the area. It was simply a manpower and equipment issue.”

The slowdown in the work was apparent, residents say.

“Now everything looks like it’s three months further behind,” said Manuel Mondragon, a resident who lives in the construction zone. “It seems like they’re struck on something, and they’re not making any real progress. It seems like all the deadlines moved like six months overnight.” 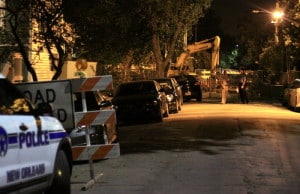 A NOPD patrol officer confers with a detective on Joseph near Prytania following an armed robbery in August. (Robert Morris, UptownMessenger.com)

With Uptown New Orleans experiencing a surge in armed robberies, residents said they feared that the fences abutting the sidewalks leading to their homes would make them easy victims to prowling robbers. Those fears were realized in August, when a man parked his car on Joseph Street and was ambushed by a gunman who emerged from around the corner on Prytania.

Mondragon said he worries about the same thing happening to him or his family whenever he parks a block or two from his home and walks through the narrow corridor to his door.

“If it was someone I didn’t know at nighttime, I’m trapped,” Mondragon said. “I can’t go left and can’t go right.”

The Corps is coordinating their efforts with the New Orleans Police Department, and if any opportunities arise to increase access for residents prior to February, they’ll do so, Templeton said. But the fences cannot be moved while the construction continues, he said, because of the risk of accidental injury to residents.

“I don’t think there’s anything that can be reconfigured,” Templeton said. “If you brought the fences in any location, it would open up the construction footprint.”

While residents said the project seems to slow down significantly after hard rains like those from last weekend, officials said that the weather is not necessarily the controlling factor on the pace of the project. After Sunday’s heavy rain, for example, contractors on Monday were still able to “place concrete for portions of the box culvert near Nashville Avenue, dewater an area between Jefferson Avenue and Joseph Street, and perform additional work on Jefferson Avenue,” said Caitlin Campbell, a spokeswoman for the U.S. Army Corps of Engineers.

“While rain does affect construction activities, work does continue after the rain event and sometimes during the rain the event as well,” Campbell said.

At Prytania Mail Services, business is definitely down, sustained only by the longtime family business’s loyal customers and an understanding landlord, said owner Peter Sladovich. After so many unexplained delays and broken promsies, the new completion date rings hollow, he said, comparing the process to the slow, maddening drip of “Chinese water torture.”

“They’re not going to make February, because there’s no sense of urgency to get the job done,” Sladovich said. “I understand the work they’re doing is a complex thing, but two years to go four blocks is exorbitant.”

The contract hasn’t changed, so that February completion date is not 100-percent guaranteed if Cajun Construction needs to move its workers again, Templeton acknowledged. But finishing Prytania as quickly as possible is a clear priority for everyone involved, he said.

“All the partners really, really want to get Prytania completed as quickly as possible. We’ve got more equipment. We’ve got more crews, and I think you’re seeing a lot more emphasis from the contractor to get this work completed and get out,” Templeton said of the February projection. “We feel good. We feel like we’re going to meet or beat that. We just can’t contractually hold them to it.” 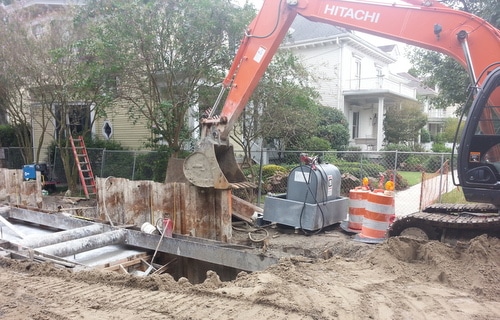